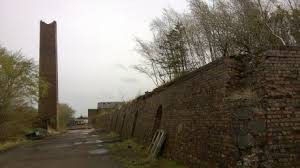 (Note – SBH – There is some confusion regarding bricks stamped AFTON with regards their exact origins. There was the Afton Brick and Tile Works at New Cumnock, the owners of which opened a brickworks at Sanquhar in 1852 and then much later there was the Afton Brick Company Limited which operated the brickworks at New Cumnock and is possibly the same company that opened the brickworks at Avonbridge. Any assistance to clarify matters for me will be gratefully received).

Avonbridge Brick Works, Falkirk The Avonbridge Brick Works in Avonbridge, Falkirk were established about 1952 by Afton Brick Co Ltd. They were operated for a time by the Caledonian Peat Co Ltd, and latterly by the London & Northern Group. The works were closed on 9 September 1977. They used a  continuous kiln, which was fan-assisted. The tapering chimney measured 4m across at ground level and is 23.5m high. The kiln is a 28-chambered, brick-built and barrel-arched Hoffmann, one of the most popular types in Scotland. Conveyors were used for transporting raw material around the site and the crusher used in the works was a Mitchell. The works made building bricks marked ‘Avonbridge’, ‘A B L’ or ‘Afton’. A stamp marked ‘AFTON BRICK’ was found at the site and is now held at Falkirk Museum.

(Note – SBH – Canmore infers that the Avon/Avonbridge Brickworks were also known as the Redford Brickworks. I am not convinced by this at all and believe they were situated at different locations, albeit nearby – for further research and in the meantime, I have created an individual page for the Redford Brickworks).

In the Falkirk Herald 29th, April 1876 an entry appeared advertising the Redford Fire Brickworks attached to Redford Colliery. The site was, therefore, producing firebricks prior to this date. There is no evidence to indicate when these works closed. However, in 1952 a composite brickworks was opened on the same site. It did not become a profitable concern and was burdened by continued financial problems. After changing hands twice it finally closed in 1978.

The earlier works obtained a good supply of fireclay and coal from the pit adjoining the works. Common clay was also available on the surface.

The following bricks were found at the works during a survey – Afton, Avonbridge, ABL, Darngavil, Eagle, Etna, Falcon, Micona and Newmains.

This is probably the maker’s nameplate from the Mitchell Crusher referred to above.

Below – 29/04/1876 – Falkirk Herald – Fire brickwork to let. To be let, for any length of time which may be agreed on, Redford Fire Brick Work. This work adjoins Redford Colliery on the Slamannan Branch the N.B. Railway (near Bowhouse Station), from which there is a Branch Railway into the work. The work consists of a steam engine, pan mill, two drying stoves, two kilns, and other appliances. A supply of excellent fire-clay and coal can be obtained from the pit adjoining the work. There is also common clay on the ground. The works can be viewed, and particulars learned, application to Richard Grant, the Colliery; and offers will be received by Jas. Cadell & Co., Redford Colliery by Linlithgow, May next. 27th April 1876. 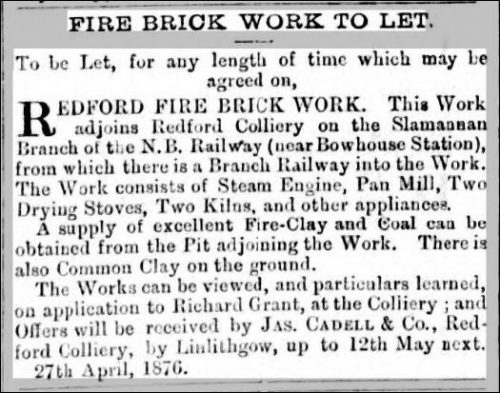 Below – 10/01/1934 – The Scotsman – The late Mr John G Reid – The death took place at his home, Gowanbank, Falkirk, yesterday, of Mr John G . Reid, aerated water manufacturer, who was well known in business and sporting circles in central Scotland. Born at Slamannan, he was educated at Bathgate Academy, and for a time thereafter served with his father at the Redford Brickworks, Westfield. In 1876 he went to Falkirk and there established the Springfield Brickworks. In 1890 he opened up business as an aerated water manufacturer at the Crown Springs factory in Falkirk, and in this, he continued until his death. For a number of years, he was chairman of the Aerated Water Manufacturers Association for Stirlingshire. A keen sportsman, he was in his earlier years captain of the Linlithgow County Cricket Club, and later held the captaincy of the East Stirlingshire Cricket Club while he also was a member of the Grahamston Bowling Club and Falkirk Tryst Golf Club. He was for long one of the best-known breeders of Scottish terrier dogs in the country. 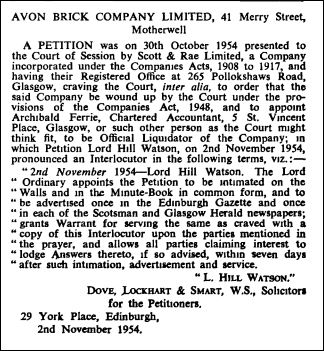 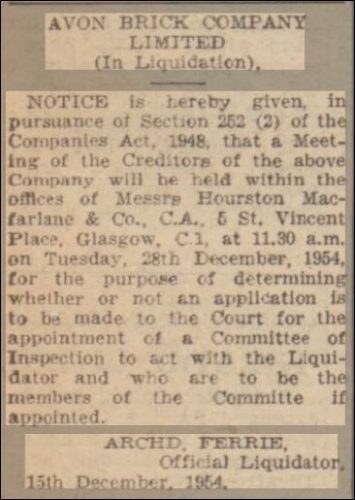 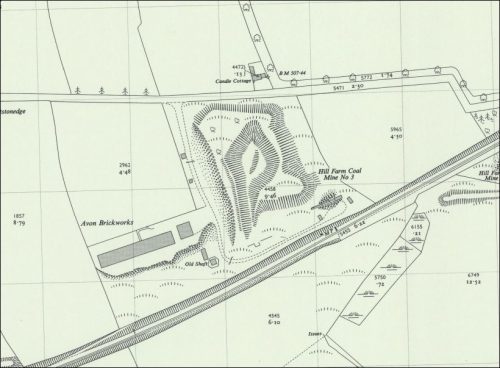 Below – 25/06/1970 – The Glasgow Herald – Makers of composition bricks at Avonbridge and Brucefield Works and sole distributors of Dockra, Cults and Fort William bricks. (Note – SBH – Are these the same Brucefield Works). 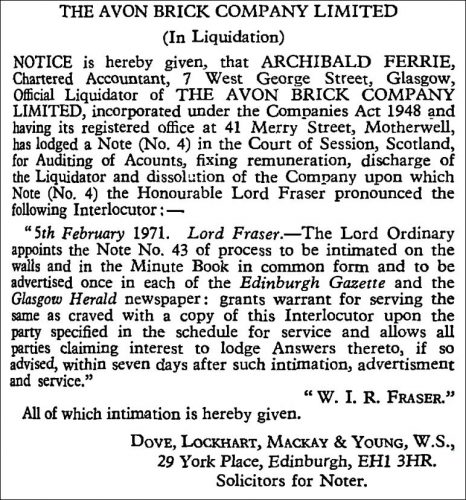 Below – Aerial view before the kiln was demolished. 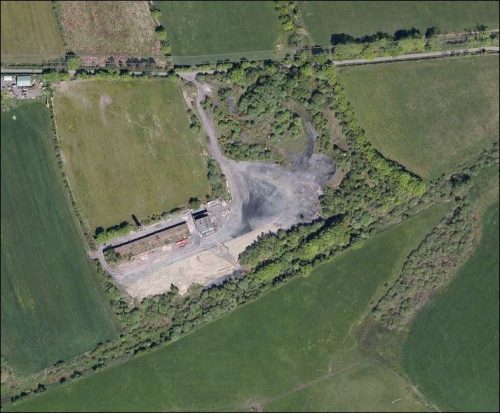 Below – This stamp below is not in my possession but picture reproduced by kind permission of FMA.

There is also a possibility that the following info on the Taylor Brothers is an earlier form of the above company or indeed they could be 2 entirely different Companies.

13/09/1901 – Edinburgh Gazette – Notice. The  Firm of Taylor Brothers, Coal, Lime, and Cement Merchants, Yeaman Shore, Dundee, of which the Subscriber Thomas Barron Taylor and the now deceased William Robertson Taylor were sole Partners, was dissolved by the death of the said William Robertson Taylor on 14th April 1901. The Firm’s Business was thereupon taken over by the said Thomas Barron Taylor, who has since then carried on and will continue to carry on the same under the said Firm name for his own behoof, and who will discharge the Firm’s liabilities. James Taylor, Thos B Taylor, Executors-dative of  William Robertson Taylor, Thos B Taylor, James A Rollo, Solicitor, Dundee, Witness. N. Cuthbert, Law-Clerk, 7 Ward Road, Dundee, Witness.

17/05/1929 – Edinburgh Gazette – Notice – The Firm of Taylor Brothers, Coal, Lime and Cement Merchants. 28 Yeaman Shore, Dundee, of which the Subscribers were the sole Partners, has been dissolved as at 30th March 1929, by mutual consent, by the retiral therefrom of the Subscriber Thomas Barren Taylor. The Business will continue to be carried on by the Subscriber William George Robertson Ellis on his own account, under the same name of Taylor Brothers. The said William George Robertson Ellis has acquired the whole assets of the Firm, and is authorised to uplift all the debts due to, and he will discharge all the liabilities of, the Firm. Dated at Dundee, this fifteenth day of May 1929. Thos. B Taylor.
Below – 1939 – Advert Taylor Brothers Dundee. 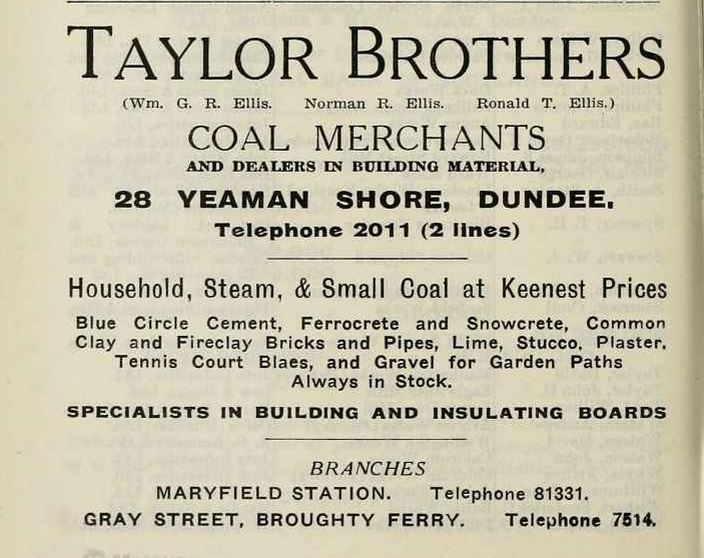