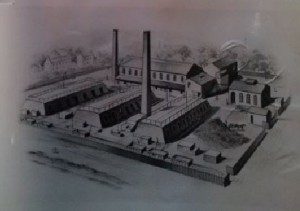 Anchor Brickworks were opened by JG Stein in 1892 and were situated on ground that formed part of the Callendar Estate, By the early 1930s however, raw materials had been exhausted and the works were forced to close in March 1932.

The closing of these works severed Stein’s connections with the house brick trade. The firm now began to concentrate on the production of refractories, which was rapidly becoming its major interest.

The site is now covered by playing fields at Dunipace, however from old photographs, it would appear that it originally consisted of 3 kilns, 2 chimneys, an engine room and several other small buildings. The kilns were 14, 18 and 22 chambered. In addition, there were 2 pits bings on the site and a railway siding running down the east side of it. Most of the common bricks manufactured from it were produced from blae or pit spoil so the raw materials were obtainable from the 2 pit bings on the site. However, in some cases, the clay did have to be imported. All bricks were machine-made and only building bricks were produced.

The works possessed their own siding which joined the Ingliston Branch Line. On-site, rails also connected the bings to the actual works. In addition, the completed product was also transported by contracted lorries.

The only information available regarding markets indicates that some anchor bricks were used in the construction of the site itself.

The labour force is reputed to have varied between 30 and 100 employees and to have consisted of more women than men. The works had no Union and no sickness or pension schemes.

During the first few decades, wages for the unskilled workers were reported to have been in the region of £1 (per week?)

An annual dance was provided free for all workers.

Below – 12/12/1896 – Falkirk Herald – Erection of new brickworks (Note SBH  – Falkirk Archives state the Anchor Brickworks were started in 1892. This article suggests it was 1896 – 1897.  Was there an earlier brickworks that I cannot find!) – Messrs J. G. Stein & Co., of Bonnybridge, have leased the blase field at Dunipace – raised from the old Anchor Ironstone Pit – the property of Messrs William Baird & Co., Limited, Gartsherrie, where they intend erecting machinery capable of turning out 13,000 or 14,000 bricks per day. Yesterday the ground for laying down the plant was inspected the firm. It is expected that the works will be in operation in the spring.

02/1897 – Charles Taylor starts work at the brickworks as an engineer. He stayed with the company for 48 years and spent much of those years as a manager at the Castlecary Works.

21/08/1897 – Falkirk Herald – New Brickworks – A start has been made with the manufacture of bricks at Dunipace. It is expected that about 50 hands will be employed when the works are in full order.

Below – 22/01/1898 – Falkirk Herald – The tramp and the engine, an extraordinary affair – drunk tramp sets the machinery going while men were engaged cleaning it. 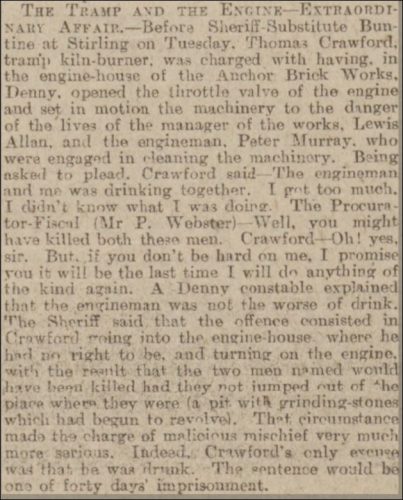 20/01/1900 – Falkirk Herald – The brick and fireclay goods trade … With regard to Denny district, in addition to the new works already referred to started by Callendar Coal Company, the extensive brick factory of Messrs Stein and has had to be increased to meet the excessive demand for bricks.  This company can boast of an extraordinary measure of success in the manufacture of brick from blaise.

30/01/1900 – Mr Stein takes Rowley and Co, Lincoln to court. Stein had bought steam engines from Rowley and had been promised a reduction in coal usage and an increase in production. The engines were fitted several months behind schedule and thereafter they did not live up to the sales agents claims.  The court, however, ruled in Rowleys favours much to the very evident displeasure of Mr Stein. – Source Kenneth W. Sanderson.

17/02/1900 – Falkirk Herald – The valuation of Messrs Stein and Co’s Brickworks. At a meeting of the Valuation Committee of the County of Stirling, on 15th September last, John G. Stein & Co. appealed against the assessor’s entry in the roll of their brickworks, Dunipace, as of the value of £200, and craved that the entry should be deleted. By lease dated in November and December 1896, William Baird & Co, let to Stein & Co, a piece of ground occupied to a large extent by a large heap of blaes, which was put out in connection with the working of an ironstone mine. Stein & Co. entered on possession of the subjects let at Martinmas, 1897, and erected kilns, ovens, and other apparatus for grinding, moulding and baking the blaes and turning it out in the form of bricks. It was contended for the appellants that these erections fell within the exception provided by subsection 3 of section 4 the Act of 1895, in respect that they were structures in which minerals (the blaes) were treated, and that the rent or lordship payable under the lease was calculated upon the minerals as so treated —the finished product in the shape of bricks. The Assessor submitted that the material treated in the structures was not a mineral within the meaning of the Act; that the exception was intended to apply not to a substance like blaes, for which, after lying waste for many years, a use had at length been discovered, but to the case of valuable mineral substances, excavated, brought, to the surface, and forthwith treated in the typical instance coal taken direct from the pithead the coking oven; and that consequently, the exception pleaded by the appellants did not apply. The Valuation Committee sustained the appeal and ordered the entry lie expunged from the roll the ground that the erections fell within the exception of the Act. The Assessor was dissatisfied with the determination of the committee and craved a case for the opinion of the Judges. In the Valuation Appeal Court on Wednesday, Lord Stormonth-Darling said he was opinion the determination of the committee was right. The respondents, Stein & Co., were rated in the valuation roll for subjects which amounted to £213, that being the royalty payable by them to the landlords upon certain bricks which they made out of the blaes, which was the subject of the lease. The assessor proposed in addition to that valuation to enter them in the valuation roll for £200 as the value of the brickworks erected for the purpose of carrying their process. That could only be done under the Act of 1895, and the question really came to be whether the structures were exempted from assessment the operation of subsection 3 of section 4. His Lordship was of opinion that they were here dealing with a lease of minerals. As to whether the structures were of the nature contemplated by the sub-section, he did not know a more convenient term to express the nature of the operation than to say that the structures were designed for the purpose of treating the minerals, which in this case happened to be in the form of blaes. The only other requisite to bring these structures under the purview of the subsection was that the rent or lordship should be calculated on the minerals treated in the ovens or other structures. There again his Lordship was of opinion that they must answer the question in the affirmative. That being so, he thought the structures fell within the purview of the subsection. Lord Kyllachy concurred, and the determination of the committee was affirmed.

04/10/1902? – Falkirk Mail – Article on John Gilchrist Stein … At Denny, where he has a common brickworks there are three Bradley and Craven machines at work and three continuous kilns for the manufacture of common bricks from “blaes bing” or pit spoil bank. Both works are lighted by electricity …

1905 – The company was incorporated as John G Stein and Co.

Below – 1913 – Anchor Brickworks, Dunipace. (The Brickworks are not detailed on the 1896 map although the Falkirk Archives information above states they were started in 1892?) 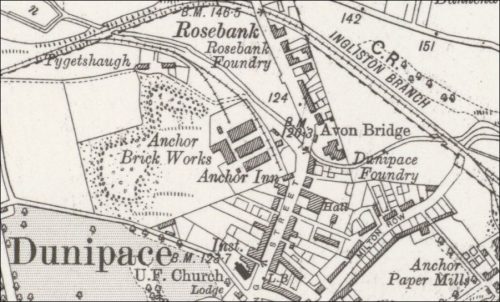 Below – 31/05/1913 – Falkirk Herald – Boy injured while playing with a bogie running from the Blaeshill to the brickwork sheds. 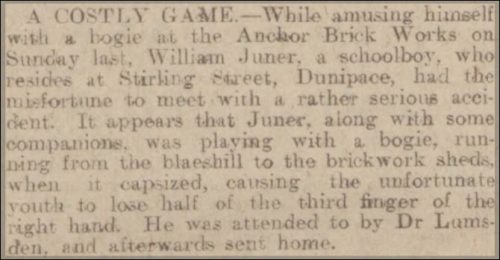 06/05/1922 – Falkirk Herald – Theft of coal – Two young men, named George Smith and W. Comrie, residing in Dunipace were charged at the Burgh Police Court on Monday with stealing 14 lbs. and 36 lbs of coal respectively from Anchor Brickwork, Dunipace, the property of Messrs J. G. Stein and company. Both accused pleaded guilty, and Provost Lochhead, who presided, imposed a fine of 10s on each, with the alternative of five days imprisonment. The fines were paid at the bar.

05/07/1924 – Falkirk Herald – Girl killed at brickworks – A girl worker, Marie Comrie (18), 258 Stirling Street, Dunipace was the victim of a fatal accident which occurred at the Anchor Brickworks, Dunipace owned by Messrs  J G Stein brick manufacturers, about 2 pm yesterday. A large wheel burst through part of the machinery becoming jambed and a piece of flying metal struck her on the forehead and killed her instantly. 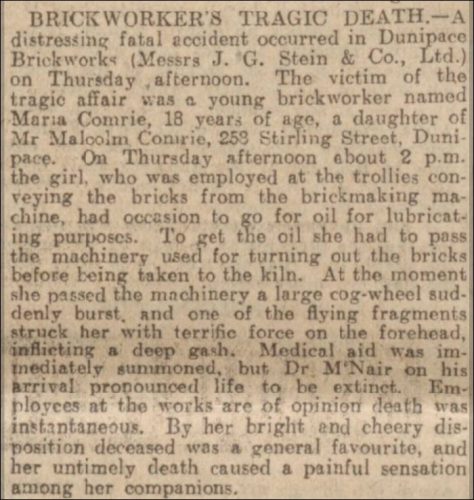 1931 – Anchor Brickworks closed after the bings being worked were exhausted.

17/06/1933 – Falkirk Herald – … A further Dunipace landmark has been removed. The process of demolition at the disused Anchor brickworks reached the stage this week when the two chimney stacks were razed to the ground. The first was brought low at the weekend and the collapse of the second was watched by many of the ‘Pace residents on Tuesday morning. All that remains of the former seat of the industry now is to all intents and purposes only a pile of bricks. 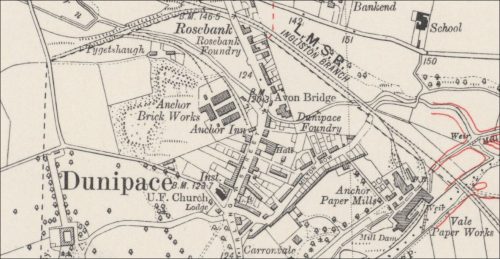