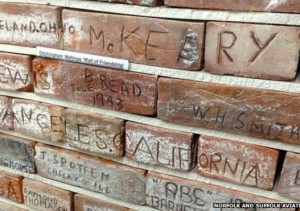 Efforts to find the families of US servicemen who wrote their names on a Suffolk building during World War II have failed.

About 45 names were etched on bricks at Ditchingham Maltings, near Bungay, while it was used as a depot for bombs.

Norfolk and Suffolk Aviation Museum tried to contact families in the US.

Mr Fairhead said he had tried to approach the servicemen or their relatives as the building was being demolished to make way for housing.

The bricks have been removed and will go on display at the museum in Flixton.

“They used to deliver the bombs to airfields about 50 miles away,” Mr Fairhead said.

Mr Fairhead said this was the case for five men who lost their lives when the bombs they were delivering to Metfield airfield exploded.

He said he believed a brick with the inscription Ted Leggett RIP could reference this loss.

Another brick which has intrigued Mr Fairhead is marked Ruci.

He believes it could relate to Lionel Richie and has tried to contact the singer to see if there is a connection.

“I think it’s his father,” Mr Fairhead said. “His father is also known as Lionel Richie and he was born at Tuskegee, where the American airmen came from.

“I wonder if Ruci was his nickname.”

The families of 18 US servicemen who wrote their names on bricks during World War Two have been traced after an American woman helped with the search.

Donna Goldbach-Martin from New Jersey heard about the story two years ago.

Curator Huby Fairhead said she had “made it a project to help me locate the families in America”.

The Maltings was used as a storage depot by the 2212 Quarter Master Truck Company (Aviation) Combat Support Wing.

The bricks came to light when the building was being demolished to make way for housing.

Mr Fairhead said that Ms Goldbach-Martin heard about the museum’s search from a relative working in Norwich.

“So far, she has helped us trace 18 families, including the widow of Lavern H Berning, who sent a list of 80 veterans names in a newsletter which helped with further research into names,” he said.

“We’ve also just made contact with the family of Don Mann from Wisconsin after Donna came up with an address and wrote to them.”

In November 2012, the project leaders said efforts to trace any of the service personnel had failed.

The bricks are now on display at the museum in Flixton. 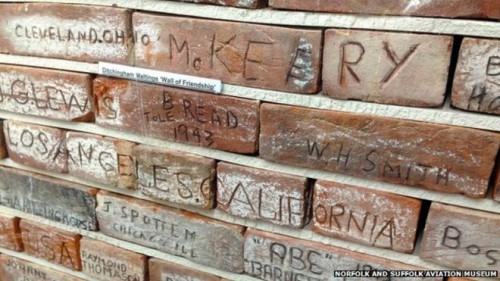 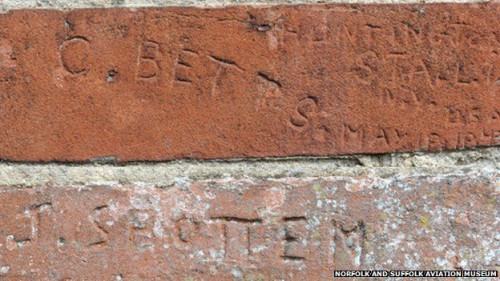