Below – 17/10/1949 – The Glasgow Herald – Murder weapon believed to have been found with regards the murder of Mary Terris, a Roughcastle Brickworks employee. 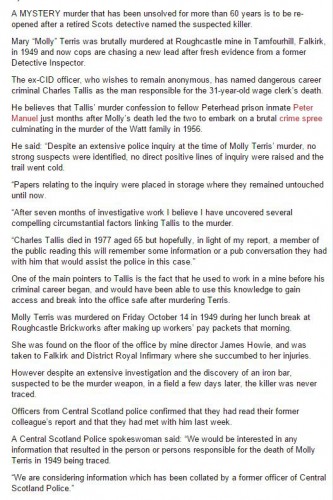 Below – 26/04/2010 – The Express Newspaper –  Charles Tallis named as a possible suspect for the killing of Mary Terris.

An unsolved murder case more than 60 years old could finally be cracked after a retired detective submitted a report naming the culprit as an associate of serial killer Peter Manuel. 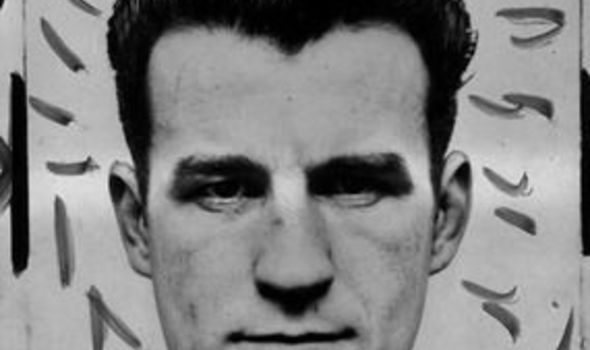 The murder of Mary “Molly” Terris at a mine near Falkirk has remained unsolved since 1949 but now police have been handed a new lead in a dossier of evidence supplied by the former detective inspector. He claims the killer was Charles Tallis, a career criminal and close friend of Manuel, who murdered eight people during a killing spree in the mid-1950s. He believes Tallis confessed to Manuel while the pair were serving sentences in Peterhead Prison – and that his account of killing the 31-year-old wages clerk may even have inspired Manuel to carry out his own two-year reign of terror in the West of Scotland. And the ex-policeman says his dossier contains strong circumstantial evidence to suggest that Molly’s killing was carried out by Tallis, who died more than 30 years ago. The former officer, who asked not to be named, said: “Despite an extensive police inquiry at the time of Molly Terris’s murder, no strong suspects were identified, no direct positive lines of inquiry were raised and the trail went cold.
“Papers relating to the inquiry were placed in storage where they remained untouched until now.“After seven months of investigative work, I believe I have uncovered several compelling circumstantial factors linking Tallis to the murder.”Charles Tallis died in 1977 aged 65 but hopefully, in light of my report, a member of the public reading this will remember some information or a pub conversation they had with him that would assist the police in this case.”One of the main pointers to Tallis is the fact that he used to work in a mine before his criminal career began. He would have been able to use this knowledge to gain access and break into the office safe after murdering Molly.
A Central Scotland Police spokeswoman confirmed the force was examining the new evidence. She said: “We would be interested in any information that resulted in the person or persons responsible for the death of Molly Terris in 1949 being traced.“We are considering information which has been collated by a former officer of Central Scotland Police.”Peter Manuel, known as the Beast of Birkenshaw, killed his victims between 1956 and 1958. On July 11, 1958, Manuel was hanged on the gallows at Barlinnie Prison in Glasgow. He was the second last person to be put to death at the jail and the third last to go to the scaffold in Scotland before the abolition of capital punishment.
Tagged with: Crime, Roughcastle