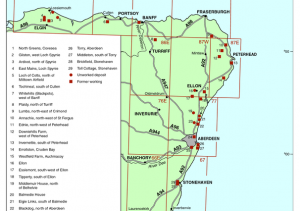 Clays suitable for brick and tile making are widely distributed within the Quaternary deposits of north-east Scotland and have been worked at almost 20 sites during the last two centuries. Most workings were small-scale and served local markets; no commercial brick or tile making currently takes place. The widely scattered, variable quality and remote nature of many deposits, the small size of reserves at most sites and the relatively high costs of firing superficial clays, all contributed to the decline of the industry.

The only comprehensive evaluation of clays in northeast Scotland suitable for brick, tile and pipe-making was undertaken by Eyles et al. (1946). This work, which forms the basis of the following account, provided geological descriptions of all of the worked and potentially workable clay deposits that had been identified in the district prior to the end of the Second World War. It also reported the results of physical and chemical tests on deposits at a selection of clay pits, which were primarily undertaken to establish the suitability of each clay deposit for brick making. The results showed the material to be of variable, but generally rather poor quality, but suitable for the production of drainage pipes, tiles and common bricks.

The data provided by Eyles et al. (1946), together with that gleaned during more recent geological surveys have been used to compile a map of the main sources of brick clay in the district (P915256). A total of 29 brick clay sites are recognised, of which 21 have been worked commercially. Eyles et al. (1946) established that common bricks had been made from a wide variety of clayey Quaternary sediments, including, ‘boulder clay’ (till), ‘fluvioglacial clay’ (clayey glaciolacustrine deposits), clayey raised marine deposits and alluvium. Workings for brick clay were also recorded in large glacially transported rafts (‘erratics’) of Jurassic mudstone. Data on the type of clay deposit and its maximum thickness at each site are summarised in the table. This shows that clays of marine, glaciomarine and glaciolacustrine origin have been the most widely worked for brick making, possibly because they are the least heterogeneous, widespread clayey deposits in the district.

Silty clays of marine origin (Spynie Clay Formation) were formerly worked for brick and tile making in two pits close to the town of Elgin (P915256; P915371). The clay deposits occur close to sea level, beneath shelly sands and peat near Loch Spynie. Considerable resources are thought to be present north of Milltown Airfield (NJ 266 658) and beneath Lossiemouth Airfield (NJ 210 695) (Peacock et al., 1968).

Dark blue-grey clay with wisps of sand was worked for pipes, bricks and tiles in a clay pit at Tochieneal (NJ 521 652) (P915372), south of Cullen, though test results indicate that mixing sand with the clay would improve its suitability for brick making. Previous accounts are undecided as to whether the worked deposits are part of a large erratic of Jurassic mudstone or a Quaternary marine deposit. It is probable that they are rafts within the Whitehills Glacigenic Formation. Similar rafted material was also worked in pits at Blackpots (NJ 659 657) near Whitehills (P915373), and at Plaidy (NJ 730 550), north of Turriff (P915375).

Greenish grey laminated clays and silts, containing dropstones and marine shells of Late Devensian age, have been worked for brick making in a pit near Annachie (St Fergus) (NK 105 529), north of Peterhead. Much of the resource is concealed beneath alluvium, but 16 m of laminated silt and clay were recorded in a nearby BGS borehole (NK15SW1).

Most recent brick production has been concentrated on Quaternary clay resources between Peterhead and Aberdeen, which are reviewed by Ridgeway (1982). Until the middle part of the 1980s, reddish-brown laminated silty clays and associated clayey tills were worked for brick making at the Cruden Bay Brick and Tile Works at Errollston (NK 088 368), south of Peterhead (Errollston; P915377). Laminated silts, sands and clays, interbedded with silty clayey diamicton, were recorded to a depth of 6.2 m, in a section at the working pit examined during 1974 by Peacock (1984). A comparable section was recorded in 1944, by Eyles et al. (1946), although the workable deposits were reported to extend to more than 24 m depth in places. The test results indicate that the Errolston deposit is suitable for the manufacture of facing bricks as well as common bricks.

Reddish-brown clay and silt was also worked by the Cruden Bay Brick and Tile Company in a pit in the valley of the Tarty Burn at Tipperty (NJ 971 268)(P915379) until the middle part of the 1980s. Eyles et al. (1946) record 5.3 m of laminated clay resting on sand and gravel in the working face exposed in 1944. The form and extent of the deposit, which was investigated by mapping and trial pitting during the 1970s, is illustrated in Munro (1986, fig. 37). At the time, 2 m of unstratified ‘red’ clay passing downward into 2 m of laminated silt and clay was recorded from the working pit. The laminated unit was seen to overlie sand and gravel resting on red-brown till. In 1944, the clay was only worked for the manufacture of agricultural drain tiles, but facing bricks were produced during the 1980s.

In and around the city of Aberdeen several clay pits were worked in the past; for example Seaton, Blackdog, Ferryhill, and Torry (P915379). The sites of all but the first-mentioned have long been abandoned and the exact extent of each working is unclear. About 1 m of crudely laminated ‘bluish-yellow’ clay was exposed in the pit at Seaton Brick Works in 1944, but 4.9 m of similar material, beneath 0.9 m of gravel was recorded from the site by Jamieson (1858). Bricks were produced at Seaton during the 19th century. By 1944, however, the deposit was worked solely for the manufacture of earthenware pottery and horticultural ware, such as flower pots. The worked deposits are assigned to the Tullos Clay Member of the Logie-Buchan Drift Group. 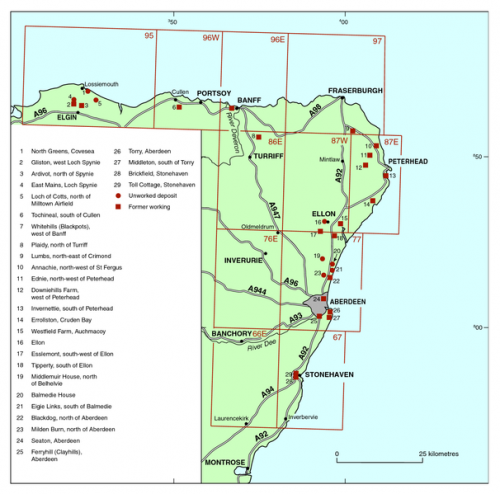