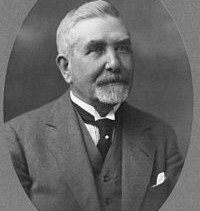 To the east of the Roman Camp at Roughcastle on the Antonine Wall, James Campbell opened a coal mine in 1889. Three years later he started to make firebricks from the fireclay mined with the coal. Alexander Towers, the Falkirk firebrick maker provided new capital in 1894 and became the principal partner. Thomas Howie who had been works manager with J & R Howie of Hurlford, Kilmarnock joined the partnership. When Alexander Towers died in 1908, Thomas Howie became the Managing Partner and on his death in 1927, his son Robert bought out Robert Campbell who had succeeded his father James.

The Fireclay with about 10 inches of associated coal was mined from a pit at the west end of the works. This mine was working the Bonnybridge seams, but later another 4 drift mines were sunk to work other seams which were known as Glenfuir, Slaty Band and Low Stone seams. The last-named was especially valuable due to the low iron content. After the 1939 – 1945 war, about 45 miners were employed and produced 95 tons of fireclay per day and 20 tons of coal. Prior to the WW1,  6 hand moulders were employed making special shapes and there was only 1 beehive kiln. The demand for these shapes used in railway boilers and domestic grates was brisk and another 4 beehive kilns were built. During the inter-war years, these beehive kilns were knocked down and 2 Belgian continuous kilns were erected. Output rose to 1500 tons a month.

In the early days, all firebricks were branded Campbell but latterly the Forth brand was used. Exports were made to Canada and Scandinavia but the West Indies and Mauritius were especially good due to their sugar plantations which required many boilers to provide steam to extract the sugar. Burma, surprisingly took several shipments of 200 tons a month in the off season to make repairs to boilers used in the rice fields for motive power. These were fired by waste rice husks which were high in alkali salts which were very corrosive to the firebrick linings. Boiler seating blocks and flue covers required replacing each year resulting in a wonderful recurring demand.

When Robert Howie died in 1947, his 3 sons Thomas, James and William became directors. The company was incorporated in October 1948 with a capital of 20, 000 £1 preference shares and 30, 000 £12 shares. Thomas Howie, MD, and his brother James took an active part in the business. Thomas became president of the Scottish Employers Council for the Clay Industries from 1962 to 1964 and President of the National Federation of Clay Industries from 1977 to 1079.

An offer for the family shares from J & J Dyson Ltd was accepted in 1965. Dyson had already taken over James Dougall and Sons in 1962 and Thomas Howie became a Director of both companies. Brickmaking was abandoned at Roughcastle and concentrated at the Bonnyside Works until 1980. The Roughcastle area was then used for opencast coal and a very large quantity of low cost fireclay was available from these operations. Source Kenneth W Sanderson

The mine is one of the oldest in the area and although the present excavations were begun in the 1930s, older workings date back much earlier. Both coal and clay were mined on the site, which extends over an area of 120 acres. The mine was originally opened to supply clay to the Roughcastle Fireclay Works and was usually under the same ownership as the brickworks. Before its closure in the summer of 1981 the mine was owned by Dyson Refractories and supplied their Bonnyside works.

The mine was approximately 100 feet deep. It was worked on the Stoop and Room method, largely because the firm was legally bound to extract only 40% of the clay available. Coal was also worked in 9 to 10-inch seams. The mine was not pumped as water drained naturally into an old shaft. Clay and coal were mined manually. The clay was removed by haulage and the coal was winched to the surface. The roof of the mine was sandstone and therefore required very little support.

Since the mine was not automated, most of the men employed in it when it closed were over 50 years old – younger men did not have the skills required. In 1979 the labour force consisted of

Tests were taken every day for gas. The level in the mine was normally 1 – 2% but if it rose to 14 – 15% there was a high risk of explosion. The mine was self-ventilating and therefore no pumps were needed to pump the air through.

3 types of clay were mined at Roughcastle. Glenfiur, Low Stone and Slanty. The latter is one of the most expensive forms of clay found in Europe. (This is slightly different information from the first part of this post) –  Source Falkirk Archives.

1892 – James Campbell opened a coal mine in 1889. In 1892 he exploited the fireclay found alongside the coal and erected a firebrick works at Roughcastle.

1894 – Alexander Towers, firebrick manufacturer, Falkirk injected new money into the company and along with Thomas Howie, former works manager with J & R Howie, Kilmarnock they formed a partnership to run the works alongside James Campbell.

16/11/1901 – Falkirk Herald – Alleged lack of conveniences at a brickwork – A letter was read from H.M Inspector under the Factories and Workshops Act calling attention to the fact that Messrs Campbell and Co., brick manufacturers, Rough Castle, near Bonnybridge, were said to have no water closet accommodation provided for the 20 men and 4 women whom they employee. He asked to be informed of what action was being taken by the sanitary authorities. The matter was remitted to the sanitary inspector for investigation and report. 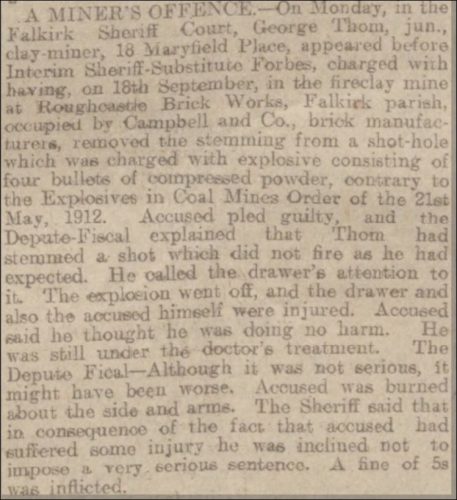 22/07/1927 – Falkirk Herald – Death of Thomas Wyllie Howie as reported on 23/07/1927. The article states that in 1892 he became a managing partner in Messrs Campbell & Co, Roughcastle fireclay Works, becoming a senior partner in 1906. Prior to 1892, he was works manager at J & R Howie, Hurlford Fire Clay Works, Kilmarnock. He was also recognised by the Scottish Fireclay Manufacturers who appointed him a member of the Employers Council of the Clay Industries.

1927 – Following the death of Thomas Howie, his son Robert bought out Robert Campbell who had taken over from his father James Campbell.

21/05/ 1930 –  Falkirk Herald – Fire Clay Pit Fatality – While, at work in the Roughcastle Fireclay Mine, Camelon, Falkirk, a clay miner named George Neilson (31), residing at Lock 10, Camelon, was killed as the result of being caught under a fall of- material from the roof. Deceased was loading a hutch with clay when there was a fall of material, and Neilson was completely covered by debris weighing about 30 cwts. He survived only a few minutes. [Scotsman 12 April 1930]

14/03/1939 – The Scotsman – Newspaper article regarding the theft of explosives and detonators from the Roughcastle Brick Works. From this article, it can be ascertained that the following were employed on-site at this time. 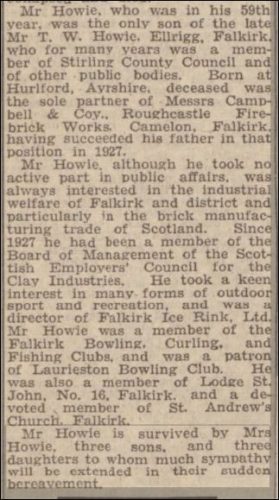 Company history: – The site opened as a coal mine in 1889 under the ownership of James Campbell. In 1892 Campbell & Company began making bricks and two years later. A. Towers, (See under Grahamston Brickworks) became a principal partner in the firm. In 1927 Campbell allowed the other partners to buy him out and by 1947 the firm was a limited company. In 1965 the brickworks were sold to Dougall & Son, ostensibly as a result of the latters’ interest in the high-quality fireclay that was available from the Roughcastle Fireclay Mine which was attached to the brickworks. There is, however, a story of a disagreement between Dougalls and Campbells over water rights. Initially, neither firm was interested in the stream that crossed their lands, but once steam engines came into use, both wanted the rights to the stream.

Today the site is owned by Dyson Refractories, although bricks have not been produced there since 1964. Mining activities continued until 1980, the clay being used to supply their works at Bonnyside.

Transport facilities: – The works had their own railway siding which adjoined the main Edinburgh/Glasgow line. Lorries eventually took over from the waggons used for local transport. In the actual works, barrows were used prior to the introduction of fork-lift trucks.

Markets: – Exported to Canada (St. Lawrence and Newfoundland), Burma (500 tons a month for use in the rice fields), Scandanavia and Mauritius.

Labour conditions: – When the works were first opened a considerable proportion of women were employed, but over the years their number declined. Prior to the establishment of the National Health Service, each worker had contributed 2d to the company doctor. At this time the works also lacked a union and a pension and sickness scheme. However, prior to the work’s closure, most employees belonged either to the Amalgamated Union of Engineers or the Trades and General Workers Union. Before the Second World War the average employee was paid 11 ½ d per hour, and in a 48 hour week made approximately £2.11s.0d. The pay varied little according to skill, and most of the workforce was semi-skilled.

Some housing was provided, for example, for the foreman, but this was not a general policy.

No training or apprentice scheme existed, and the works employed a team specifically for essential maintenance.

Raw materials: – Fireclay was mined at the company’s own mine situated on the opposite side of the main Edinburgh – Glasgow railway line. Three types of clay were mined at Roughcastle: Glenfuir, Low Stone and Slanty. The latter is one of the most expensive forms of clay found in Europe. The mine is one of the oldest in the area, but the present sears were opened in approximately 1935. The clay was obtained by the “stoop and room” method, partly because the firm was obliged to limit its extraction rate. Today, however, working has ceased. (See Roughcastle Fireclay Mine).

Processes: – The works started out with one bee-hive kiln (down-draught and coal-fired) and all brickmaking was done by hand. The huge demand for railway bricks prior to the First World War resulted in the six hand moulders already employed being supplemented by a moulding machine. During the depression of the 1930s two more Belgian kilns (oil-fired) were installed, and the works became capable of producing 1500 tons of bricks per month. By 1965 the works had acquired three more kilns, three pan sills and a plastic machine.

Thomas Wyllie Howie, JP (8 April 1856 – 18 July 1927) was a Scottish captain of industry. He and his wife settled in Falkirk where he became a partner in Campbell & Co Fireclay Works and coal mine, Roughcastle. He later became the owner of the business. Previous to settling in Falkirk the Howie family lived in Hurlford, where they owned the renowned Hurlford Fireclay Works (until it was bought by Armitage Shanks), which produced pottery, bricks, chimneys, garden ornaments and enamelled sanitary ware (lavatories, baths, urinals etc.) – WIKI