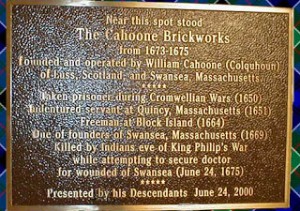 I have added this due to the Scottish interest.

1673 – 1675 – The Cahoon Brickworks – Founded and operated by William Cahoone (Colquhoun) of Luss, Scotland, and Swansea, Massachusetts.

William Colquhoun (Pronounced Ca-hoon) was perhaps the first Cahoon to come to the colonies. He was from Dunbartonshire, Scotland. His descendant live all across the US. They have variations on the surname with the most common being, Cahoon, Calhoun, Cahoone, Cohoon, Colhoon, Colquhoun and Calhoun.
____

– taken prisoner in Dunbar, Scotland, during the Cromwellian Wars (1650)
– shipped as an indentured servant to Braintree, Massachusetts (1651)
– freeman at Block Island, Rhode Island (1664)
– one of the founders of Swansea, Massachusetts  (1669)
– killed by Indians on eve of King Philip’s War while striving to get a doctor for the wounded of Swansea (June 24, 1675).

The plaque marks the site of William’s Brickworks in Swansea, Massachusetts and is mounted on a boulder by the Swansea Luther Museum which houses what is believed to be one of the actual bricks from this operation. 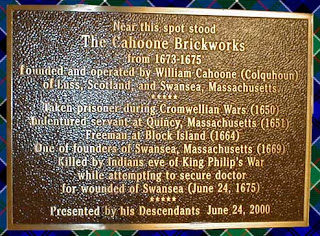 Below – The script is the notice of William as the official brick maker for the town. 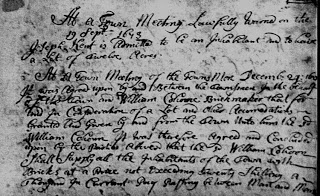