30/10/1847 – The Scotsman – Desirable farm, lime quarries, colliery, brick and tile works upon the estate of Mackiehill, Peebleshire … The brick and tile works at Whitfield with the field of clay adjacent thereto, will be let on a lease of 5 years from 01/02/1848. The kiln and sheds have been recently erected and are in the best possible order, and there is a house attached to the work. The offers must state a fixed minimum rent or a Lordship in the option of the proprietor … Coal will also be supplied from the Estate Colliery.

Below – 21/12/1850 – The Scotsman – Prices of tiles at the Macbiehill Tileworks – 1851. Two and a half per cent discount allowed on all accounts settled before 26th May 1851. Orders to be addressed to Mr Charles Lawson, Deepsykehead, West Linton. 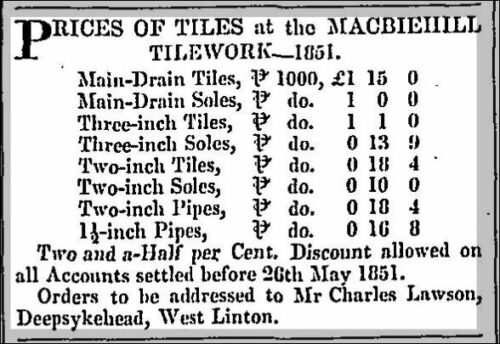 1856 – 1858 – ScotlandsPlaces – Whitefield – A tileworks on the farm of Whitfield having good sheds for drying and kiln for burning. The tiles are generally used for the purpose of draining, The works are in the possession of the proprietor George Berresford, Magbiehill or Macbiehill or Mackiehill. Tenants? Mr. Stoddart, Whitfield and David Moffat, Whitfield 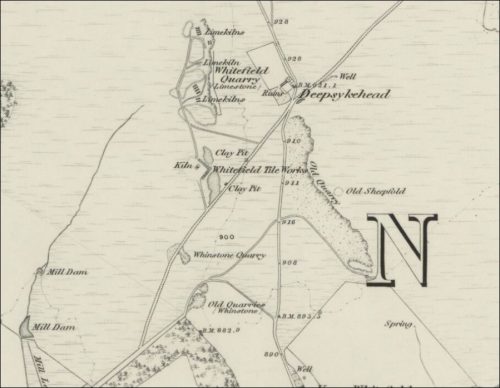 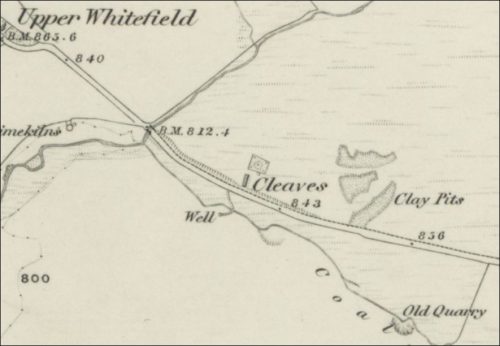