Many thanks to Chris J Veitch, Jedburgh for his assistance in ascertaining the location of this tilework.

1841 – Census – Huntill Cottages, Jedburgh. William (20) and Isabella Dobson (20). William Dobson – tile maker.  (As the crow flies, Huntill is located close to Cringleburn and it is very likely William Dobson was employed as a tilemaker at the Cringleburn Tileworks).

06/11/1857 – Kelso Chronicle – Education – Mrs Forsythe most respectfully announces to the inhabitants of Oxnam and surrounding district that she intends opening her seminary on Monday 9th November where the usual branches of education are taught upon the most approved principals and lowest terms. Oxnam Tileworks.

Below – 1859 – Cringleburn Saw Mill, Oxnam. (Note – SBH – Although not detailed on this map, this is the likely location of the Oxnam or Cringleburn Tileworks). 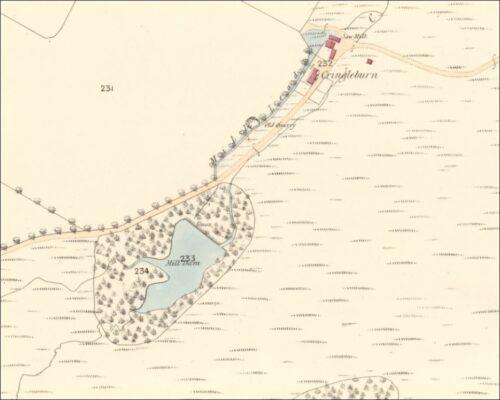