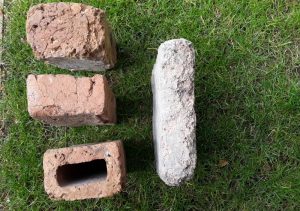 Wellhill Brick and Tileworks – Wellhill and neighbouring Benston were two of the many properties in the parish on New Cumnock owned by the Marquis of Bute.  While limestone was quarried at Benston, to improve the quality of the soil, a furnace was set up at Welhill in the early 1800s, for the manufacture of tiles to improve the drainage of the land.

A valuable insight into life in a tileworks is given by Mauchline born Adam B. Todd.  Although he is best remembered as one of the leading literary figures in New and Old Cumnock, as a 16-year-old in 1838 he was a “washer-off to a tile burner in the parish of Galston.  Four o’clock starts on a Monday and Tuesday for emptying and filling of kilns, with a penny fine imposed for being late.  It was five o’clock starts the rest of the week and a seven o’clock finish with half-hour breaks for breakfast and dinner.  Tile-moulders were paid by the thousand and ‘thus made slaves of themselves, and greater slaves of their boys, to increase their earnings, which were large from 7s 6d to 10s a day.’

Six years later Todd was engaged as the tile burner and assistant manager to Hugh Meikle at Wellhill Tileworks. It appears clay was in the Todd family blood.  An older brother managed a tileworks and lime works, while a younger brother went to the Isle of Bute to start a new tile works, although this proved to be unsuccessful – the machinery incomplete and the clayfield had no proper fall for the water.’  Todd’s partnership with his brother-in-law in an extensive brick and tile works at Dalquharran, on Girvan Water also proved to be a loss-maker.

However, the Wellhill Tileworks was paying well.  Todd, at a cost of £350, had erected a new kiln, new pan rollers and installed other machinery.  In the 1851 census, Adam Todd is recorded as a Tile Manufacturer, employing 15 labourers.  Living with him and his widowed mother at Wellhill Tileworks was 20-year-old Hugh Harris – a tile-maker born in the parish of New Cumnock.  Hugh would later emigrate to Australia where he became a prosperous farmer and served as a magistrate.

In the previous census of 1841, prior to Todd moving to Wellhill, Andrew Hodge and William Febrew and six members of his family are found at Wellhill Tileworks.

Todd recalled a fatal injury to James McCulloch one of his best workmen.  The silk napkin that he wore around his neck got caught on the shaft of the pipe-tile machinery, whirling him around violently to such an extent that he later died of internal injuries.

In the 1861 Census A.B. Todd, is described as a tile manufacturer employing 4 labourers and a farmer of 86 acres employing 2 men. Two years later the Tileworks and the nearby farm of Taiglem were taken from him and from there he moved to Afton, Bridgend for a short spell, before moving to Cumnock.

c.1835 – Lord John Crichton Stewart, the 2nd Marquis of Bute, who was then an active man in his early 30’s, began a series of tile draining schemes for the benefit of his tenant farmers. In that year he established a tile work at Ochiltree which operated with considerable success by the Edgar family. In the same year, he erected another tilework on 2 acres of clay-bearing land that was once part of the farms of Burnfoot and Hillside in the Parish of Ochiltree and also about that time he established a tilework at Wellhill which was operated by Hugh Meikle. Source unknown.

17/04/1846 – Glasgow Herald – To Brick Makers – Wanted – Person to mould and burn in clamp about aa hundred thousand bricks at Killochside near Ochiltree and at Wellhill, in the Parish of Cumnock. Apply to Hugh Meikle, Wellhill Tilework, Cumnock. Dumfries House 13/04/1846.

25/05/1853 – Dundee Courier – Sequestrations – Adam Brown Todd, brick and tile manufacturer, Kilchattan, County of Bute and at Wellhill in the parish of New Cumnock and County of Ayr. 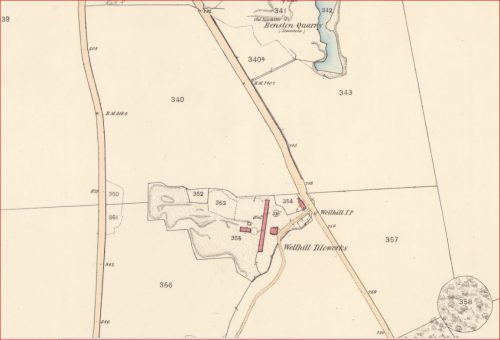 1867 – Hugh Meikle, Brick and Tile Works, Ochiltree, Cumnock. (Note – SBH – I am uncertain if this reference relates to Wellhill which was operated by Hugh Meilke or the Burnfoot/Ochiltree Works at Ochiltree, Cumnock).

31/05/1889 – Ardrossan and Saltcoats Herald – Cumnock – Commissioners meeting concerning the new filter beds … The new filter will be 40 feet long, 29 1/2 feet broad and when finished, 7 feet deep. The sides will be built with Wellhill brick, faced with white enamel brick. The copestone will be 20″ broad by 10″ thick and the bed will be made of concrete … (Note: I suspect this means the walls will be 2 bricks thick. A Wellhill brick lined with a white enamel brick. If this is the case, I doubt the enamel brick would be made at Wellhill – most likely a Kilmarnock brick.) 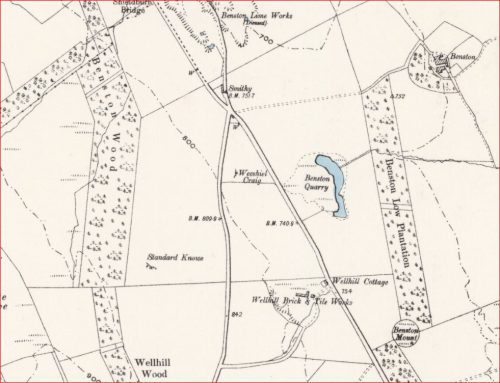 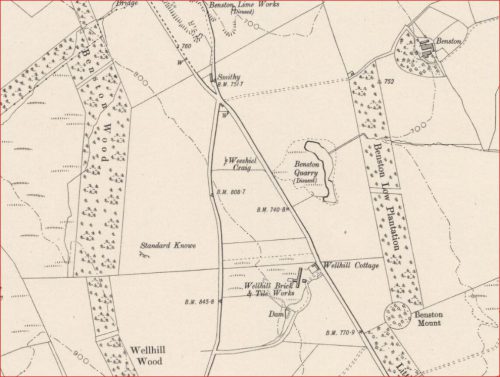 Below – The following unmarked bricks were found on the perimeter of the old Wellhill Brick and Tileworks. They may well be products of the site. 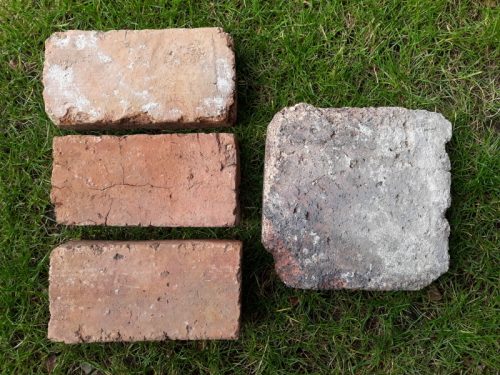 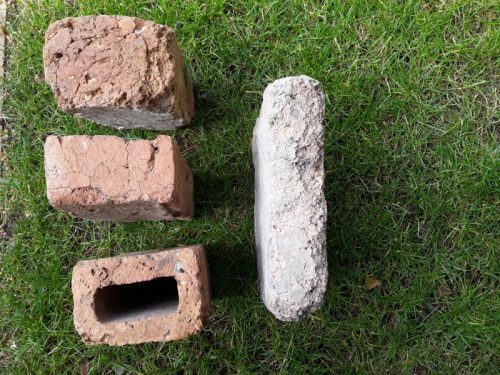 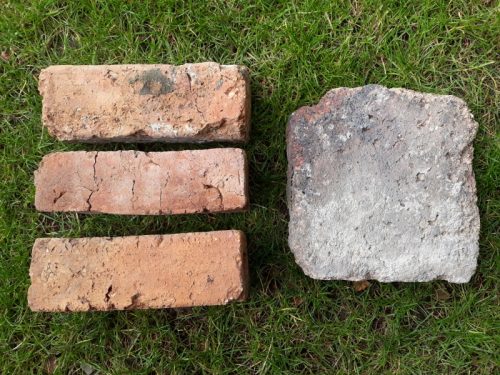