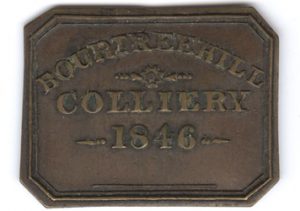 21/03/1874 – Ardrossan and Saltcoats Herald – Reference made to Mr Nisbet being the manager of the Bourtreehill Fireclay Works.

27/06/1874 – Ardrossan and Saltcoats Herald – An accident of a serious nature occurred on Tuesday night, on the line of rails leading from Bourtreehill Fire Clay Works, to a young man named Wm. Robb. It appears that he, along with a lad named Campbell, was conducting a six-ton waggon laden with pipes down the incline to the G. & S.-W. line of railway. The brake was not in a very good condition, for when it was applied it took no effect whatever and the waggon dashed on until it left the rails where, the turf being soft, its course was soon stopped. Some persons who were passing cried at the lads to leap. Campbell got off clear but Robb stumbled back and the plumber box caught him, bruising him severely. The contents of the waggon were destroyed.

09/07/1881 – Irvine Times – Excursions. Claiming right-of-way through the “Ancient and Roya ” on Saturday last, being the first Saturday of July, were numerous, amongst them being a cavalcade of brakes from the brickwork districts of Messrs J. and M. Craig, at Perceton, and Messrs Findlay and Finnie, at Bourtreehill, both in the parish of Dreghorn.

16/06/1883  – Irvine – Two Miners Killed – Two miners named John Ramsay, aged 36, and John Heron, 22, were killed on Saturday morning at Caprington pit, Irvine, belonging to Bourtreehill Coal and Fire-clay Company. They were engaged in making communication through twelve feet of solid coal when a quantity of rubbish came away without warning and buried both men. The bodies have not yet been recovered. (Scotsman 18 June 1883).

01/10/1884 – Freemans Journal – The Sanitary Congress and Exhibition Dublin. The Bourtreehill Colliery and Fire Clay Works Co, Dreghorn, Ayrshire N.B exhibit various specimens of their specialities consisting of white and yellow enamelled kitchen sinks, slop stones and washing tubs, white enamelled bricks, facing and fire bricks. The company claim for their sinks and wash tubs a cheapness and durability above that of iron or wood. The appearance presented is that of porcelain while the material is held to be much stronger.

09/10/1885 – Irvine Times – Erection of a new workmen’s row at Dreghorn. The Bourtreehill Coal and Fire Clay Co have completed the erection of a row of ten dwelling houses at Dregborn Railway Station, for the convenience of their workmen. The houses are built of white brick, are high in the roof, and appear to be otherwise of comfortable dimensions.

1886 – The Bourtreehill Coal Company extended its Broomlands No.9 Pit to work under Newmoor, however by 1928 production had ceased.

28/05/1886 – Ayr Observer – International Exhibition, Edinburgh … The most numerous c.ass of exhibits is that of fire clay and pottery work, exhibited by Messrs J. & M. Craig, the Bourtreehill Fire Clay Company, Messrs J. & R. Howie. In this class of goods, the first-mentioned firm are strong exhibitors. They have (court 6, No.827) a very large stand of fireclay and enamelled goods from their works at Hillhead and Perceton, and of sanitary pottery &c., from Longpark. Of enamelled work, they have an extensive collection, for sewerage and other sanitary purposes. In white earthenware, sanitary pottery, and also in some terracotta busts, notably of Sir Walter Scott, they are conspicuous. Ranking next to them in fire clay work for sanitary uses is the Bourtreehill Fire Clay Company, which exhibits among other appliances, Miller’s patent drain traps, Cowan & Miller’s patent grease traps and Arnistrong’s patent inspection junctions for drain pipes, the last of a which is exceedingly ingenious in contrivance and will probably be of great use for sewerage. The Edinburgh agents of the Bourtreehill Fire Clay Company, Messrs William Clunes & Co, Leith Walk, Edinburgh, show some beautiful work in Scotch and Irish marble, consisting of three chimneypieces and a floor of marble mosaic. The central chimneypiece is made of Blanc. P. marble, with its columns, panels and other enrichments in Glen Tilt and other Scotch marbles of various colours. That on the left hand is of Galway black marble with panels in Portsoy serpentine. The principal feature, however, is the marble mosaic floor, laid out in beautiful patterns of white, grey and black marble and entirely composed of Scotch material taken from quarries in the counties of Argyll, Inverness, Banff and Perth. In all four exhibits, the different colours of the marble have been most tastefully arranged, the predominant ones being black and different shades of grey. An important feature is that, with the exception of the Galway, the Sienna and the Blanc P. marble, the whole of the material used is Scotch. Messrs J. & R. Howie, Hurlford Fire Clay Works, Kilmarnock have two stands of enamelled work and fireclay sanitary appliances, one of them being outside in the grounds. Among other useful exhibits of theirs are their well known ventilating traps which are used in Balmoral and elsewhere …

29/05/1886 – Irvine Herald – Ayrshire Exhibitors at the International Exhibition … J. & R. Howie, Hurlford Fireclay Works, Kilmarnock, show at their stand white enamelled baths, sinks, washtubs and milk coolers, together with enamelled ventilating sanitary traps, horse mangers, cattle troughs, patent filters, and several kinds of bricks manufactured at their works. Perhaps the largest collection in this section is that of M & J. Craig, Hillhead and Perceton Fireclay Works, and Longpark Sanitary Pottery, Kilmarnock, whose exhibits are of the most miscellaneous description. The greater part of them have more or less connection with the subject of sanitation, but besides these are many other useful and ornamental articles which have been turned out from the fire-clay works and pottery of the Kilmarnock firm The Glenfield Company, Kilmarnock, in addition to sewerage fittings have on view a very fine collection of water work fittings. The Bourtreehill Coal Company, Dreghorn, Ayrshire, show enamelled fireclay goods and several patent drain traps …

29/06/1888 – Ayr Advertiser – Bourtreehill Fireclay Works Excursion.— The workmen of Bourtreehill Colliery and Fireclay Works, with their wives and sweethearts, to the number of nearly 500, had their annual excursion on Saturday last. This year the place selected was Glasgow and the Exhibition, and the weather was all that could be desired for an outing of the kind. The trip was taken rather earlier than usual this year, as the workmen wished it arranged for the Saturday immediately following the marriage of Mr Findlay (one of the partners of the firm), and in lieu of a supper which would have been provided for the workmen on the occasion. Mr Findlay (individually) and the Bourtreehill Coal Co. very generously bore the whole expense —both railway and exhibition tickets—so that the workmen and those accompanying them enjoyed the trip entirely free of cost. The excursionists left by special train at 9.30 in the morning, and returned from Glasgow at 9 o’clock in the evening, reaching home about 10 o’clock, all well pleased with their day’s outing, and thoroughly delighted with their visit to Glasgow and the Exhibition. 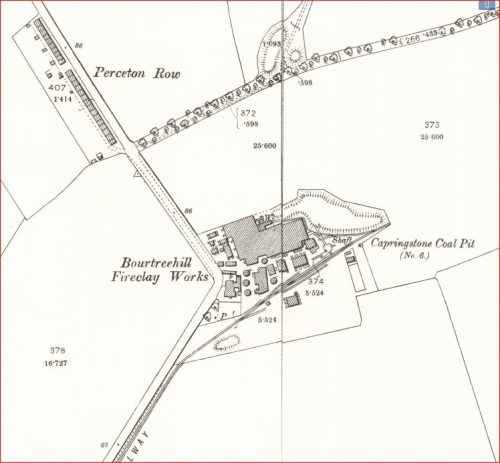 9/09/ 1895 – Pit Explosion At Dreghorn – Yesterday morning as the men employed in the Churrlands pit, Dreghorn, belonging to the Bourtreehill Coal and Fire-Clay Company, were about to start work an explosion occurred by which four men, whose names are Charles Durnie fireman; John Strachan, miner; Hugh Parker, miner; and Adam Lorryman, miner, were severely burned. The fireman was making his usual inspection before the men commenced work for the day, and, it would appear, was closely followed by a number of the men. The party, it seems, was proceeding along the main road, and in passing an old disused part of the workings, which opens into the main road, there was an explosion of fire-damp, which appears to have collected in this part of the workings. The four men were severely burned about the head and face, and during the forenoon two of them – Durnie and Strachan – were conveyed by ambulance waggon to Kilmarnock Infirmary. Parker, who appears to have been knocked about a little, also sustained several bruises about the body. [Glasgow Herald 10 September 1895]…

26/08/1898 – Irish Independent – Messrs John McFerran and Co, 4 Beresford Place, sole agents in Ireland for Bourtreehill Fireclay Works, Dreghorn, Kilmarnock, have been exhibiting at the Health Exhibition a number of sanitary specialities, including Armstrong’s patent inspection openings, grease traps, yard gullies, drain traps etc. The firm have always enjoyed a good reputation for the high character of the goods vended by them.

Below – 1918 – This table was taken from an Inspectors Report in 1918. The final 3 columns refer to the manager, number of persons employed below ground and then the number above ground.

Below – 10/09/1934 – The Scotsman – Colliery purchase – Bairds and Dalmellington – Mauchline workings – Mauchline Colliery, Ayrshire which originally belonged to the Caprington and Auchlochan Collieries Ltd, now in liquidation, has been acquired by Bairds and Dalmellington Co Ltd, a coal combine which has substantial interests in the same county … Bourtreehill Fireclay Works had also been carried on successfully by the liquidator, and from the profits realised during the past year, a considerable sum had been applied to the reduction of debt. The liquidator concludes his report by acknowledging the valued services rendered by the committee who cooperated with him in the realisation of the subjects, Mr David Todd, the mining agent, and the members of staff.

05/10/1937 – The Scotsman – Southhook Potteries Company which has its headquarters at Kilmarnock has acquired the whole of the issued share capital of the Bourtreehill Coal Co Ltd which has a connection in the fireclay and sanitary ware trade. 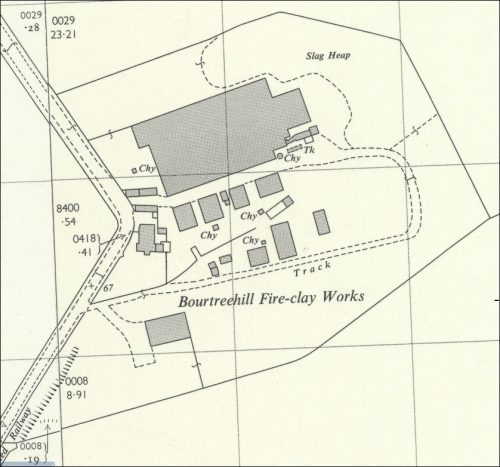 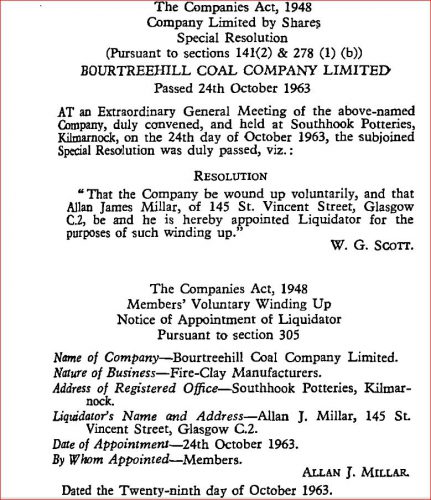 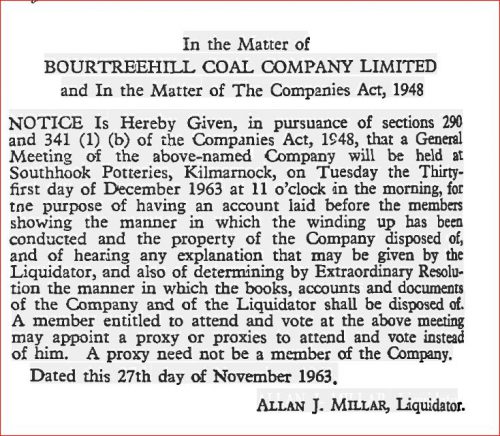 Below – 23/12/1966 – Irvine Herald – Another landmark disappears. Mr Jamieson Clark described it on BBC television last week stood as one chimney which Santa Claus won’t come down this year. A start chimney was made last Wednesday morning with the demolition of the first of four chimneys of Bourtreehill Brickworks, Dreghorn, which have stood as a landmark for almost a hundred years, having been erected in 1871. The other tall chimney (on the right of our picture) was brought down the same afternoon. Both chimneys were around seventy-five feet tall. 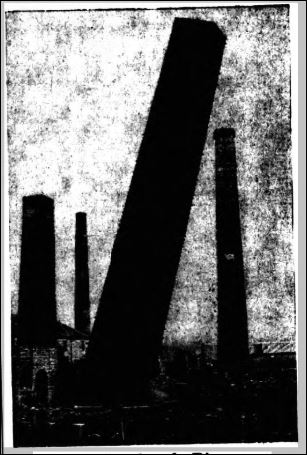 Below – This undated Southhook Potteries catalogue reveals that they owned the Bourtreehill Coal and Fire-Clay Company at some point. 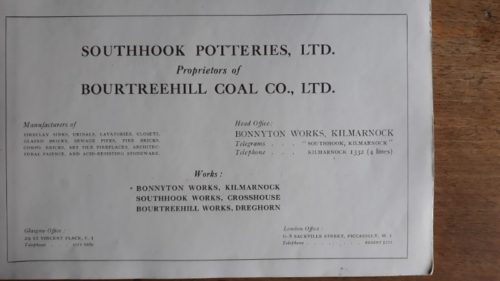 Below – The following drain related items were photographed at Muirhouses Farm, Perceton/Dreghorn, Kilmarnock. 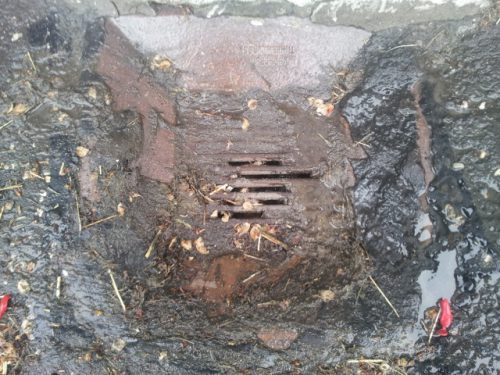 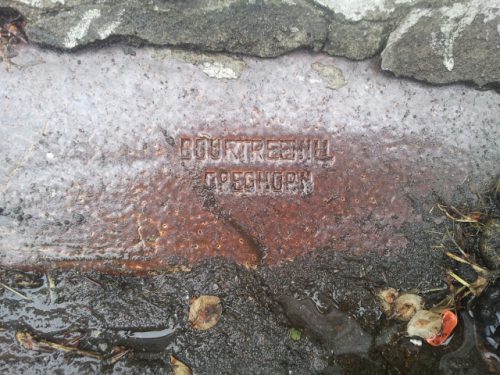 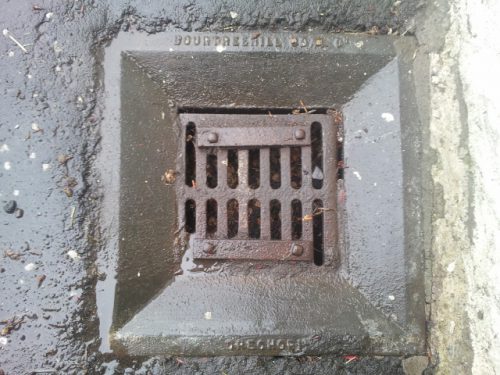 Below – Unmarked but believed to be a Bourtreehill, Dreghorn product. 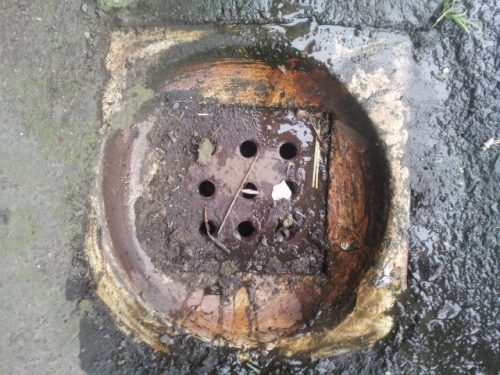 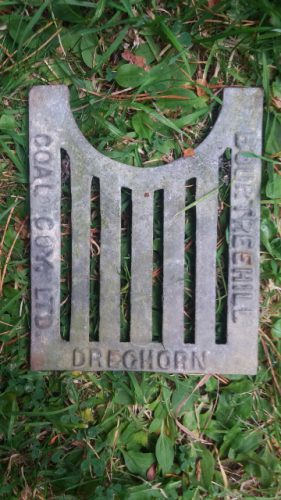 Below – A section of white glazed garden edging stamped ‘Bourtreehill Dreghorn Kilmarnock’. This is in the possession of Colin Gilbert, Dalry. 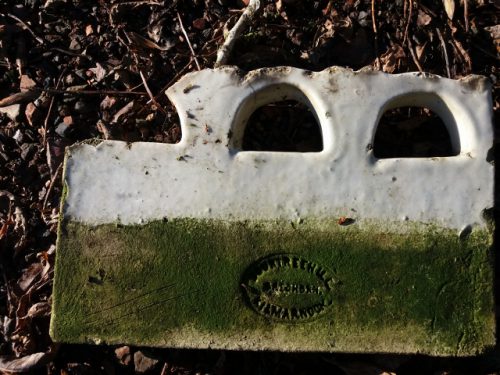 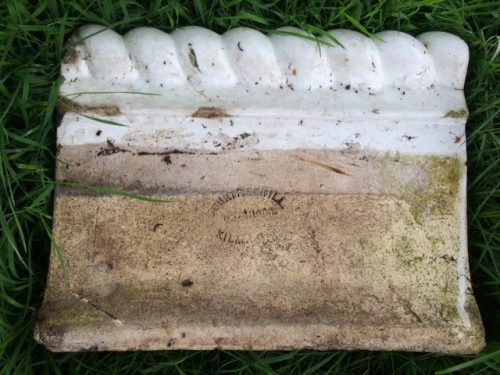 Below – Tokens such as this were unofficial pieces of money which were substituted for a proper coin when the mint was issuing insufficient coinage and could be redeemed for official money when it was available.  Different companies and merchants produced their own individual tokens which make them highly collectable.  This one would have been used in exchange for coal from the Bourtreehill Colliery near Irvine in North Ayrshire. 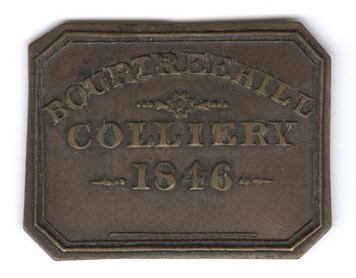 Below – Some beautiful sales samples of Bourtreehill products. Most of the pieces are stamped. Found by Chris Bruce in a pile of rubble which was once an old cottage near to Montrose, Angus. 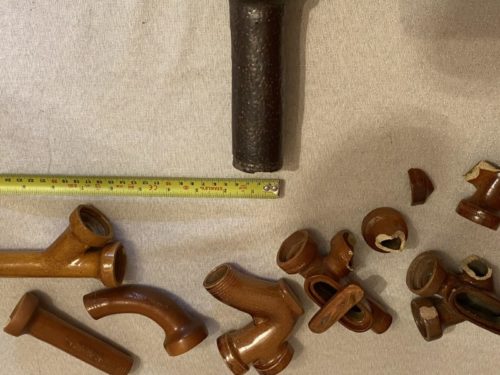 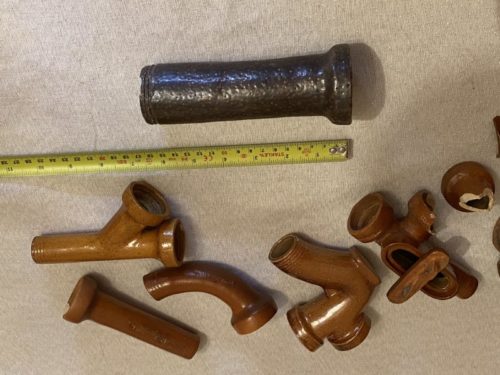 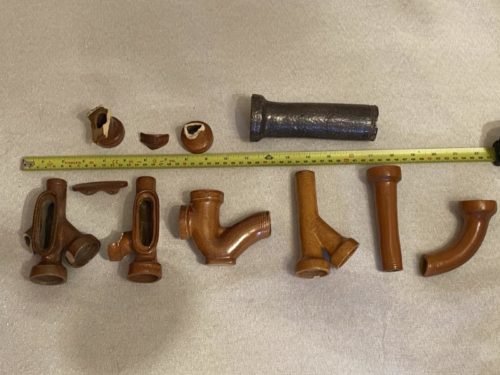 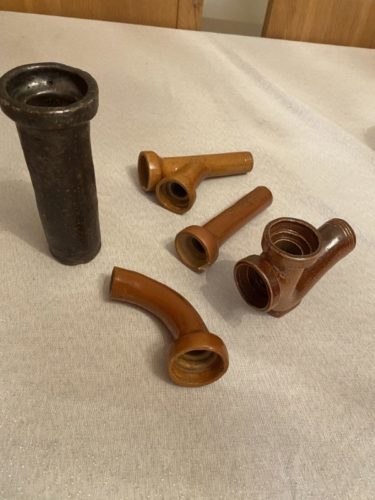