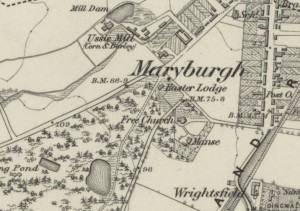 1808 – This information is from am article in the Inverness Courier dated 15/10/1909 – This article describes the formation of Maryburgh village by Lord Seaforth in 1808. In July 1808 Lord Seaforth advertised lands to be feud in perpetuity at Bridge of Ussie between Dingwall and the Bridge of Conon … Freestone quarries were in the neighbourhood and a brick and tile work would begin early in the spring … The brickworks manufactory opened by Mr Yule in 1809 was conducted for many years with marked success and many houses were roofed by the excellent red tiles made …

With regards to this page, special thanks go to William Anderson of Inverness for his assistance in local dialogue, information and newspaper cuttings. Many thanks to you Bill.

A correspondent says  – In your excellent journal of date 5th May last, I was much pleased to see you take notice of the progressive advancements of manufacture in our country, and the encouragement so liberally bestowed by a discerning public on those who make it their study to bring to perfection the productions of our native soil. A few days since I was going the road to Dingwall, I viewed the brickworks lately begun at Ussie, by Messrs Yules, where several thousands of the finest bricks I ever saw were burning in the clamp and saw thousands more in the field. The clay at Ussie is the best for brick and tile work in Scotland but was on trial found so difficult to work that the manufacturers were of the opinion at first that bricks could not be made from it so as to be of any advantage to the maker.  The difficulty is now however altogether got the better of, a mill being erected on the field for grinding clay. The mill was constructed and made by Robert Innes, son of Alex Innes, Mill Wright, London. The machine is driven by water and performs the work with such expedition that it far surpasses anything of the kind ever constructed. Source –  Inverness Journal 23rd June 1809.

30/09/1840 – Inverness Courier – Article on the progress of the Ross-shire harvest … At Hilton (which is now believe in Tulloch’s own hands) may be seen the beneficial results of draining and improving. The land was thoroughly drained last spring and is now bearing a crop of oats, seven or eight quarters per acre. Mr Davidson drained about thirty acres with small stones, the size of road metal; and this season he has used tiles from the Kildun tile-works, which are expected to answer better than stones in the clay subsoil of Strathpeffer. The utility of tile-draining is daily becoming more apparent. Ross of Cromarty has established an extensive tile work in Easter Boss, and Provost Cameron of Dingwall has another in operation near Maryburgh. The tiles are sold at £2 and £2 2s per thousand and seem of excellent quality …

Below – 08/08/1841 – Inverness Courier – Article on field draining with particular reference to Phippsfield. (Note – SBH – The article also refers to a smaller tile works near Dingwall. This could be referring to the Ussie Tileworks) 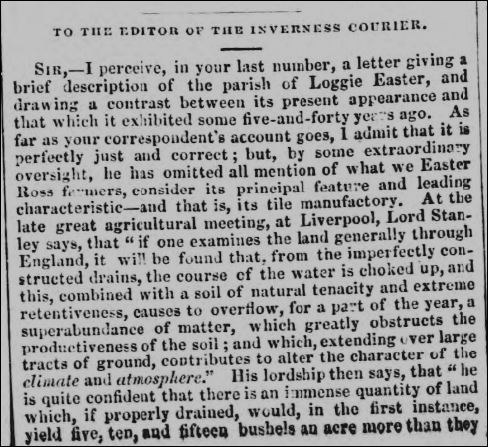 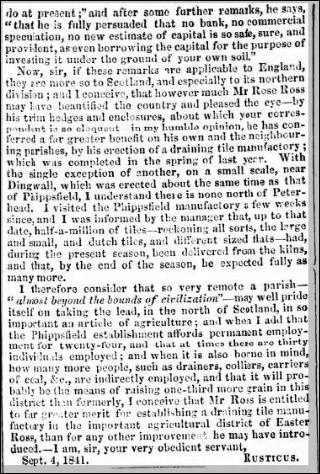 Below – 1873 –  showing the site of Ussie Brickworks as indicated by the curling pond and pond – these are presumably waterlogged claypits. This map is 64 years after the newspaper article so the brickworks may have been long disused and forgotten.

Below – Google map showing Broad Wood, Maryburgh where it is thought Ussie Brick and Tile Works were previously situated.

Below – 1873 – The brickworks are not detailed. The map is reproduced to show the relationship between Ussie and Lower Kildun. 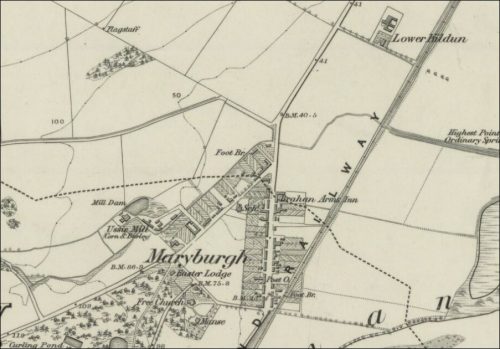