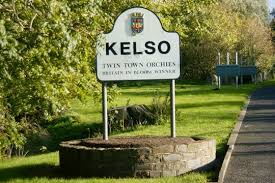 Many thanks to Julia Posener for supplying much of the information for this page.

Mike Hooper, Graham Holling and Jeff Sunderland ( Cyril Jeffrey Sunderland ) had between them a broad range of experience covering the essential aspects of refractories manufacture – production, research and development, and technical sales.  And after a few months, they were joined by Brian Morgan, who had long experience of product promotion with a major specialist refractories company.  The ingredient they lacked was money, and they readily admit that the struggle they had to obtain it was hard but educational.

Although born and trained in England, they all had spent some years in Scotland and were prepared to settle there.  They could see the arguments in favour of setting up their enterprise in northern England, but their final choice of location was determined by the financial backing they could get.   They combed the north as far as the Highlands and Islands.  Eventually, with the assistance of the Small Industries Council for the Rural areas of Scotland (Sicras), they chose a site at Kelso, Roxburghshire, sold their houses to increase their cash resources, and entered into a financial arrangement with Samuel Wilkinson & Co Ltd, brick and refractories manufacturers of Elland, Yorkshire.

Turret Refractories Ltd was formed in June 1972 and it moved into a 3 000ft single-storey building on the Pinnacle-hill Industrial Estate at Kelso two months later.
They started literally from scratch, Kelso, at the confluence of the Tweed and the Teviot, is one of the loveliest places in the British Isles, but it offered no facilities of immediate value to a refractories manufacturer except a small iron foundry on agricultural work.  there was no experienced labour, and the company had to recruit and train a team whose previous occupations included farmer, baker, stationmaster, bookmaker’s clerk and co-operative society employee.  They also had to seek and help the suppliers essential to their own operation, in some cases as far afield as Edinburgh.  They reflect that had they started up in, say, Sheffield they would not have suffered these headaches; on the other hand, they feel they have gained something from the enthusiasm and flexibility of people new to the trade.  And they claim their products are equal to the best even though they operate in a specialised field competing with some of the very best companies in the refractories industry.

Starting with one pan mill and a 1-t kiln, they have built up their facilities to include three mills, three driers, two presses (one of 700 t capacity) and second and third kilns of 3 t and 5 t capacity.  A vibratory press is next on the shopping list for the plant.

Turret Refractories produces a standard range of refractory products; specialising in those based on silicon carbide, alumina, Mullins and super refractory materials in general.  A large part of this production is in shapes made by conventional pressing techniques but a variety of shapes are made by more unusual methods such as pneumatic compaction and vibration casting.  Monolithics are also made; castables, mouldables, rammables and jointing cements – based on super refractory grogs.  Firing is carried out in intermittent kilns up to 1 750 C if required.  Turret has stated that it is interested in going outside its standard range to make speciality products for customer – where high resistance to thermal shock is required or where the product must be of minimum porosity, to give two examples.  The company is also able to make refractories based on stabilised zirconia and fused magnesia.

First among Turret’s standard range are its Roxide grades of silicon carbides.  These are 88% SiC, 9% SiO2, 2% Al2 O3 types capable of handling up to 1550 C in service under reducing conditions; having an apparent porosity of 14 to 17% with a modulus of rupture at 1350 C being 204 kg/cm2 .   These figures apply to Roxide C; Turret’s Roxide D has less SiO2, slightly more SiC and is self-bonded, with superior oxidation and abrasion resistance.  In service, the temperature can go up to 1 700 C under reducing conditions.  The Roxide range is available either as brick or block or as tiles, skid rails, etc.  They can be supplied with alumina, mulling or zircon facings in the form of sandwich tiles.  A range so SiC monolithic a is available under the brand name Kelide.
Turret’s Mullite refractories, under the name Roxmul, come in fused Mullite grain and sintered Mullite grain types.  Roxmul F, a fused type, is 74.80% alumina, 23.70% silica with a pce of 39 to 40, an apparent porosity of 15 to 18% and 1 350 C modulus of rupture of 77 kg/cm2 .  Kelmul is a Mullite jointing cement and rammable range.

In alumina refractories, Turret has its Roxal range.  Roxal TM90, for example, is an 89% alumina, 10.05% silica type with a pce value of 17 to 20% and a modulus of rupture of 84 kg/cm2 at 1 350 C.  Roxal 95, based on brown fused alumina, is especially suited to high abrasion areas, such as skid rails.  The low silica content (0.2%) of Roxal 99 is suitable for chemical industry applications where low silica is important.  One example is in secondary reforming units.  A number of monolithic products are available in the alumina range.

Bubble alumina insulating refractories are a feature of Turret’s product list.  Roxal BA34, one of these, is capable of service temperatures up to 1 760 C, has a 55% apparent porosity, and 18 kg/cm2 modulus of rupture at 1 350 C.

Turret have a wide range of customers including installation contractors, refractories makers, furnace builders, and many user industries such as power generation, steel and aluminium.  They do not seek work as installers but are prepared to advise where there are problems or prototype products are involved.  They pay tribute to the help they received from customers in their early days and are confident now of their ability to meet any demands made upon them.  They look for a bright future when industry revives.  They have learned a lot in the hardest school and refractories people who admire courage and technical competence will surely wish them well. 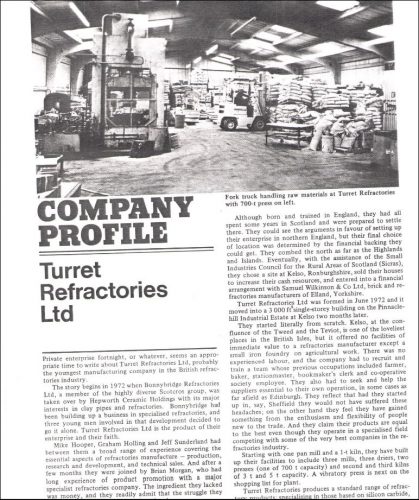 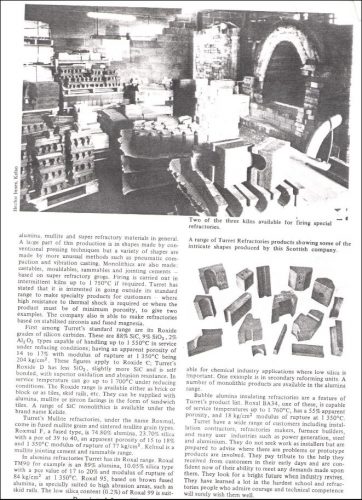 Peter Lowrie a former employee at Turret Refractories details the following:- In 1980 Turret Refractories Ltd was taken over by Zirconal Ltd. In 1983 Clinokalk ltd took over the reigns and thereafter Zedmark Refractories in 1984. Zedmark removed the business to Dewsbury, West Yorkshire, England where it was based. The name Turret Refractories was kept going through these changes for shareholder purposes and recognition.

07/08/1987 – The Edinburgh Gazette – Turret Refractories Limited – Passed 23rd July 1987  at an Extraordinary General Meeting of the Members of the above-named Company, duly convened and held at Ednam House Hotel, Kelso, Roxburghshire on 23rd July 1987, the following Extraordinary Resolution was duly passed:— “That it has been proved to the satisfaction of this Meeting that the Company cannot, by reason of its liabilities, continue its business, and that it is advisable to wind up the same, and accordingly that the Company be wound up voluntarily, and that Peter William Townend of 36 Clare Road, Halifax be and he is hereby nominated Liquidator for the purpose of the winding-up.” John Trevor Wilson, Chairman