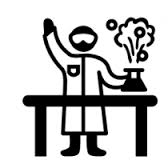 The Laboratory – About 1915 Mr Stein met Professor Fearnside, FRS, of Sheffield when he came to talk to the Falkirk ironmasters. Over the years he was invited to stay at Millfield when he came to Scotland, and they were soon good friends. Mr Stein took such trusted friends out worm hunting in the late afternoons, then down to the glen to feed his trout in the burn and the water garden ponds. They were not invited to fish as this was reserved for the resident kingfisher and the visiting grey herons. On the Professor’s advice, Mr Stein decided to start a laboratory at Castlecary in 1927 just before his death. Harry Edwards was the first chemist, and in 1928 Dr Hyslop was appointed by Colonel Stein to take charge of it.

A wet chemical laboratory analysed fireclays from the mines for alumina, silica, iron, and alkalis. Coal was checked for the ash content and the refractoriness of the ash. Chrome, magnesite, and aluminous raw materials were analysed as the price could depend on the buying specification. Later these wet titration methods were replaced by an electronic sparking machine which measured the wavelength of the elements present.

On the physical side, cold and hot crushing tests checked the finished bricks. In a separate furnace room, a series of eight furnaces heated bars and cubes of bricks loaded with slags from many industries up to 1,800C. A small crushing plant occupied a room sealed off from the rest of the building to avoid dust, and a full-scale Boyd press could make up sample brick from special batches under development. Eighteen people manned this building.

Both Castlecary and Manual works had small laboratory sections to take samples, do screening checks and other routine tests. Jan Gworek, who had served in the Polish forces in the war, did some fundamental work on the various clays and how they contracted and expanded when heated in dilatometer furnaces. Jean MacIntyre and Percy West worked in the chemical laboratory. John Stewart supervised the furnaces. Bill Stickler, an Orcadian and a geologist, was second in command under Dr Hyslop, and later became the managing director of a division of Hanson Trust.

Douglas Michael was in charge of the works section …

Dr Hyslop produced a series of leaflets explaining refractory terms, such as ‘spalling’ and ‘refractoriness under load’ for students in technical colleges. These were much in demand and ensured the students started their careers in the industry with a knowledge of Stein brands. When Dr Hyslop retired, Dr Davis, a Sheffield man and a student under Professor Fearnside, took over the laboratory.

9/1964 – The Refractories Journal – Dr W. Davies joins John G. Stein & Co Ltd. Dr W. Davie has joined the staff of John G. Stein & Co Ltd as a director of research designate and will succeed Dr J. F. Hyslop next year. Prior to this appointment, Dr Davies was on the staff of the research and development department of the United Steel Companies Limited at Rotherham which he joined in 1945. He was responsible for the initiation and development of the department’s minerals section, an organisation which played a major part in the redevelopment of all mineral resources of interest to the company, including refractory materials. The section’s activities included extensive studies of mineral dressing and the sintering of ores. He also held the additional appointment of geological consultant to the company. Dr Davies studied under Professor W. G. Fearnsides and Dr W. J. Rees at the University of Sheffield and holds the degrees of M.Sc (Sheffield), Ph. D (London), D.Sc (London). He is a member of the Institute of Mining and Metallurgy. 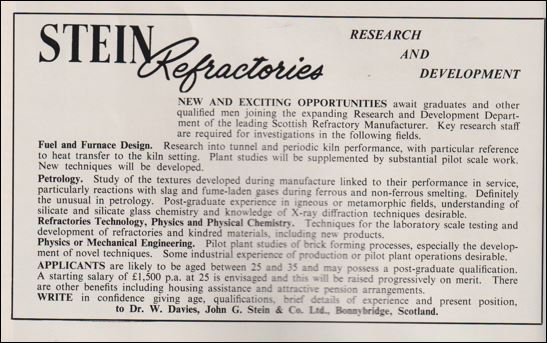