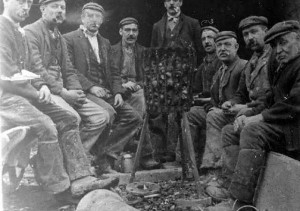 The Scottish Employers’ Council for the Clay Industries.

The intervention by the government during the war in fixing prices and directing which customers should receive bricks, together with the claims of miners and other workers for higher wages, led many employers to realise the need to combine to argue their case. Mr Stein and Mr William Douglas of the Douglas Firebrick Company took the initiative in Scotland to persuade other clay users to join together and found the SECCI in 1917. Mr Stein became the first President until his death in 1927, when his son, Alan Stein took over till 1931. Mr Douglas then served till 1934. The number of firms varied over the years but usually was about fifty. They were divided into refractory, building brick, and clayware pipe sections. In the early days following the government’s fixing of prices, the Council also fixed prices, and Mr Stein made sure that Thistle and Glenboig sold at the same price. The competition was on quality and he was sure he had the edge on that.

In the post-1939-45 war, period price fixing became unlawful but the Council still had to negotiate wages and discuss many other matters so that the industry’s views could be put to government departments. James Wilson, as SECCI secretary, coordinated these matters until his retiral in May 1960, when Bill Stevens took over.

One useful initiative was the standardisation of brick sizes, at the surprisingly high number of 108. The common size is 9 x 4 ½ x 3 inches. However, each length of 9’ requires a breadth of 4 ½”, 6’ and 9’. Lengths based on 12’, 13 ½”, 15’, and 18’ require similar breadths. All these lengths and breadths require side arch and end arch tapers varying by 1/8’. Finally, the thickness can vary from 3’, 2 ½’, 2’, 1 ½’, and ½’. If you add up all these sizes and leave out a few because they are not too much in demand you will come to over a hundred sizes. It was still a big improvement on the previous practice. The names of such a series of sizes, vary in different parts of the country, but in Scotland, they include squares, scones, pups, whelps, soaps, bullnoses, feathers, and cupolas amongst others. Source Kenneth Sanderson

24/11/1917 – Falkirk Herald – Employers and employed in the clay industry are to be congratulated (writes the Glasgow Herald correspondent) on the expedition with which they have set their house in order and achieved the realisation of the new partnership in industry. In July last a conference was held in Manchester, presided over by Alderman Charles F. Spencer, chairman of the Leeds Fireclay Company, Limited and a special committee was appointed to draft a scheme. The report of this committee, a valuable document which will be remembered for its actual positive work during the reconstruction phase, was submitted to a further conference held at Manchester last week. The completed scheme will be before the country, with the imprimatur of the Government, on Friday. It is expected to embrace employers making building bricks, refractory bricks and material, sanitary goods, terra-cotta and enamelled ware, pottery, china, and other branches of the varied clay trade. The Guildhall meeting will be attended by Mr G. Wink Wight, C.A., Glasgow, who has represented Scotland on the Special Committee. Mr Wight is well known to refractory material manufacturers as a director of James Dougall & Sons (Limited), firebrick manufacturers, Bonnybridge and Scottish local secretary of the Ceramic Society. He is the medium of communication between the Minister of Munitions and the Scottish refractory manufacturers, and secretary of the recently formed Scottish Employers Council for the Clay Industries.

26/12/1919 – The Scotsman – Organisation of the clay industries – Mr John G Stein presided at the annual general meeting in Glasgow of the Scottish Employers Council for the Clay Industries. The report submitted by the secretary, Mr G. Wink Wight, C. A . showed that excellent progress had been made in organising both refractory and building brick manufacturers in Scotland during the past two years, all the principal firms being members of the Council. Wages had been dealt with on a national basis. Hours of labour for brickworkers had been reduced to 48 per week. A joint committee of employers and workers Union representative’s had adjusted various differences, remitted for settlement. Through the Council, contracts for bricks for the housing schemes in Scotland had been arranged with the Director of Building Materials Supply, and prices had been fixed after costs had been ascertained. The report and financial statement were adopted on the motion of Mr King, of  Bothwell Park Quarries and Brick Works (Ltd.), seconded by Mr Leckie, United Collieries (Ltd.) Mr John G Stein was re-elected President of Council, and the following Board of Management were appointed – Messrs John G Stein, John H. Hurll, Wm. Douglas, James Hamilton, Provost Frew ), Alan Stein, G Dunsmuir, John Weir, William Leckie, T W Howie, F. C Howie, James Rule, J King, R M Goldie and W H C  Paine, with G Wink Wight, C. A ., as secretary.

02/01/1920 – Kirkintilloch Gazette – Clay Industries Council. At the annual general meeting of the Scottish Employers Council for the clay industries over which Mr John G. Stein presided, Mr G. Wink Wight reported that all the chief firms were now members of the organisation. Wages had been dealt with on a national basis. Hours of labour for brickworkers had been reduced to 48 per week. A joint committee of employers and workers union representatives had adjusted various differences remitted for settlement. Through the council, contracts for bricks for the housing schemes in Scotland had been arranged with the Director of Building Materials Supply, and the prices had been fixed after costs had been ascertained.