Note the difference in spelling of Redston(e). 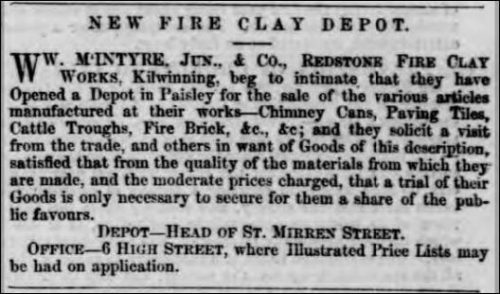 JURY TRIALS
(BEFORE Lord Ormidale and a Jury) Armour V Howie
This case was set down for trial-to-day. It is an action at the instance of Mr Armour, of the Redston Fire Clay Works, Kilwinning, against Mr Howie, of the Hurlford Fire Clay Works, Kilmarnock, to have the latter interdicted from using Mr Armour’s patented apparatus for measuring and regulating the supply of ground fire and clay and water to the pugmill, in order to obtain through the mill a plastic clay of any consistency required in the manufacture of fire clay goods.  An apparatus was some time since erected by Mr Howie in his works at Hurlford, which Mr Armour alleged t be a infringement, and defended the action brought against him by Mr Armour, and accordingly, the case was sent down for trial on an adjusted issue.  On Thursday, Mr Howie, intimated through his agent that he would no longer maintain his defence, as he has consented to decree of interdict passing against him, and finding him liable in expenses. Pursuer’s agent-J. Gillespie, Defender’s agent-W. H. Muir.

Redstone Fire Clay Works, Kilwinning – The brickworks produced 4,000 tons a year of fire bricks, chimney cans, pipes and retort bricks in 1858, when it was managed by McIntyre & Grey. The exact site is unknown, but the area is covered with many coal pits which would have provided the fireclays as a by product. Source Kenneth Sanderson – The Scottish Refractory Industry 1830 – 1980.

Redstone colliery was located near Kenneth’s castle towards Bridgend and may well have been the site of the fire clay works.