The Redhall Tileworks are within  1/2 a mile of the advertised clayfield at Auchlishie and may be one of the same.

23/01/1846 – Dundee, Perth and Cupar Advertiser – To tile and brick makers. To be let on Auchlishie, near Kirriemuir. A field of superior clay well adapted for burning. The locality is very favourable for tile making none being to be had within 15 miles and a good and increasing demand for them in the surrounding district. Encouragement will be given to a tenant by the proprietors. The clay field will be shown by the greve of Auchlishie. 14/01/1846.

28/01/1847 – Fife Herald – Important Railway trial. Methven v The Edinburgh and Northern Railway Company (Note – SBH – There are interesting references here to the subject of this post) … Mr Alexander (Thomas Alexander?) is the manager of Lord Wemyss’s tilework on the estate of Elcho, and of Mr Tyndal Bruce’s tilework at Falkland, (Dunshelt?) and he has also one of his own three miles north of Kirriemuir (Redhall?). Paid a rent for the clay on his own tilework, and had the privilege of working a ten-acre field to any extent for £20 a year. Paid no surface damages, nor for drainage. The depth of the tirr is 13 inches, and that of clay 9 feet. Calculated on making 800,000 tiles a year. There was a tilework in the course of erection within six miles of his work. Bruce’s field contained good clay, which was easily worked. Would give 1s per 1000 of lordship for it. Lord Wemyss’s clay field was also good and easy to work and would give 1s of lordship for it. Would give 4d a cubic yard of lordship for Mr Methven’s clay. If he had to erect works, he would only give the half of that for it. Witness here alluded to the clay which lay between the present face and the road. As the face advanced, the expense cartage would increase. The witness would not work the clay on the other side of the turnpike for nothing, to make tiles but would give 1d. per yard for it to work it on the ground. An archway below the road and a drain would require to be made before this field could be wrought. The witness was proceeding on the assumption that he would get the prices he was now getting. In Forfarshire, the price of drain tiles was 23s  per 1000, cost of making, 22s. At Lord Wemyss’s estate, the price was 26s, cost of making, 21s 8d. At Mr Bruce’s, the price was 27s 6d, cost making 20s 6d, The profit on bricks at his own work was 3s 6d per 1000 At Lord Wemyss’s, 2s 10d. At Bruce’s work, very few bricks were made formerly, but more were made now. The profit on roofing tiles at the witness’s work was 15s, but there was no competition. At Lord Wemyss’s the profit was 15s 8d. At Mr Bruce’s it was 26s 6d.

Below – 17/12/1847 – Dundee, Perth and Cupar Advertiser  – Tilework in Forfarshire for sale by a private bargain. The tilework at Redhall of Auchlishie two miles distant from Kirriemuir, in a district of country where tile draining is coming into active operation. The Works, with about thirteen acres of ground, are held in tack for fourteen years from Whitsunday 1846; and the purchaser will have the right to remove the machinery, &c, at the expiry of the lease, or to get stipulated value therefor. The Kiln is of size to burn 25,000 common tiles or 30,000 pipes, and the shedding contains 40,000 tiles. There is a dwelling house, stable for three horses, and a byre for four cows. All the premises have been erected within two years, and are in perfect order. Water power may be obtained at a small outlay. The subjects will be shown by David Borthwick, residing on the premises; and offers will be received, till 1st February next, by Mr Thomas Alexander, brick and tile maker, at Bridge of Earn; or by Duncan Wilkie and Charles Walker, writers in Kirriemuir. Kirriemuir, December 8, 1847. 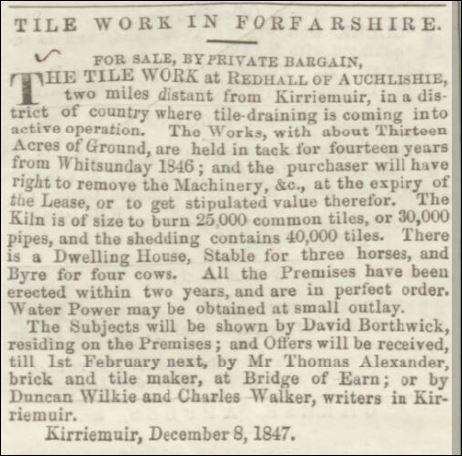 1851 – Census – Parish of Dunbarney, Thomas Alexander, (35), a farmer and tilemaker employing 18 men. The address is difficult to make out but it may read ‘Bridge of Earn Toll House’

Below – 04/08/1854 – Dundee, Perth and Cupar Advertiser – Land and Houses to let and sale of barley and materials at the Redhall Tilework, near Kirriemuir. Let, with entry at Martinmas next, about 13 acres of excellent arable land at of Auchlieshie, with the dwelling-house and offices thereon. A small field of barley, upon the possession, will be sold by private bargain and offers for it will be received by Mr Brodie, Kirriemuir, till the 12th current. The erections connected with the tilework, consisting of about 200 feet of shedding covered with from 7000 to 8000 roof tiles; the tile kiln; a cast-iron pug mill with malleable iron shaft; a number of barrows and other articles, will also be sold by private bargain, and offers for the same will be received by Mr Brodie till the 1st September next. The foreman at Redhall will show the land &c and point out the erections connected with the tile-work. If desired, the tilework with the erections connected therewith and the land and houses will be let for the remainder of the current lease, with immediate entry. For further particulars application to be made to Mr Brodie. Kirriemuir 2d August 1854. 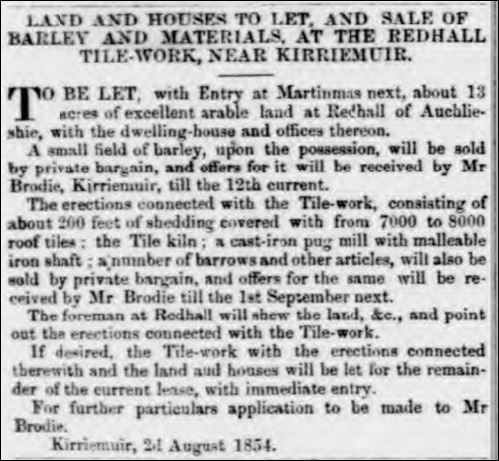 Below – 1862 – Redhall Tileworks. These works were now disused. 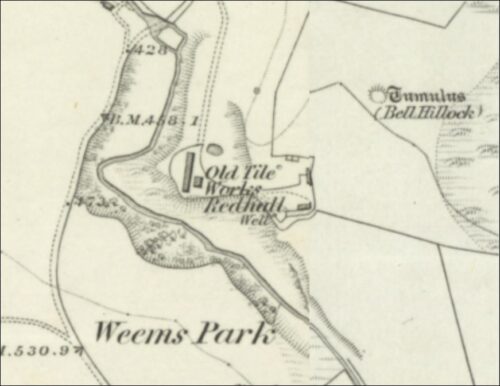