I believe the ‘Marykirk’ brickmark refers to the parish of Marykirk as opposed to the village.

The village of Marykirk, at the Southern end of the Howe o’ the Mearns, is located on rising ground to the East of the River North Esk, Nr  Laurencekirk and Montrose

“Another first for Marykirk was the claim that, in 1747, an Irish labourer who had moved here from Kilsyth, grew the first potatoes in the area. They did not, however, find much support from the locals and it was many years before the “tattie” started to replace oatmeal as the main carbohydrate in the diet.

Prior to the railway, which arrived around 1849, the village, like most others was largely self- sufficient with its own tailor, blacksmith, shoemaker, baker, joiner and even a brickworks. The latter was actually demolished to make way for the railway.”

Primrosehill – A barren moorland, about thirty acres in extent, on the “south side of the parish, formerly a part of Marykirk Parish, but recently annexed to Fettercairn, formed a detached portion of The Burn estate. In 1852 Colonel McInroy sold it to William Airth, a retired ship captain, residing in Arbroath. On taking possession, he trenched and drained the land and brought it into a fair state of “cultivation. He carried on a brickwork for a few years on a corner of the ground. Besides a farmhouse and offices, a smithy and one or two dwelling-houses were also erected. Mr Airth gave the place the name of Primrose hill; but, in reference to its original barrenness, some of its waggish neighbours dubbed him ” The Heather Laird,*’ and he himself humorously owned the title. At his death, in September 1872, he left the property to his nephew, William Airth, M.A., Accountant, Manchester, now residing at Lochlands, Arbroath.

This reference eludes to a possible location for the brick and tile works – “Fettercairn, Marykirk  … The brick and tileworks North of Inverury Wood point to an early ‘industrial’ presence in the area” p 18. 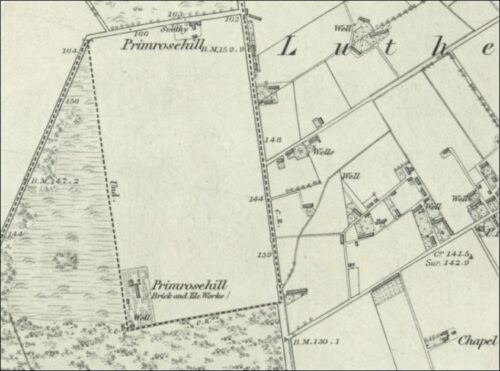 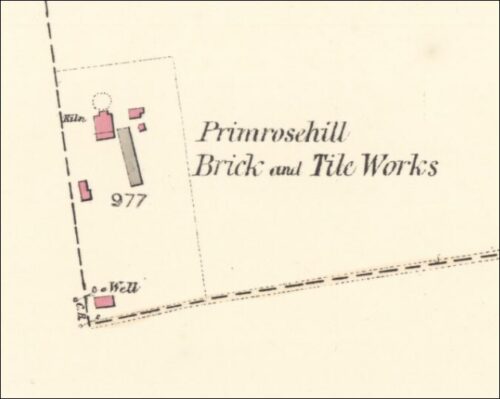 1863 – ScotlandsPlaces – A brick and tile work on the estate of that name, There are all the appurtenances necessary for large work, steam engine etc. Proprietor Captn [Captain] Alexander Airth.

19/05/1879 – Dundee Courier – Primrose Hill Brick and Tile Works, by Laurencekirk. Scott & Grindlay beg to intimate that they have commenced brick and tile making at the above place and hope that by supplying a good article at a moderate price they will secure a share of public patronage. List of prices may be had on application at the works or at Shore, Arbroath.

25/11/1879 – Dundee Advertiser  – Brick and tile work with stock in trade and right to lease for sale by a private bargain. That brick and tile work at Primrosehill, near Marykirk, Kincardineshire, with machinery and all requisite appliances, together with stock of bricks and tiles at and about the works, and also at Marykirk Station, of the Caledonian Railway, and right to the lease, of which six years are to run, are hereby offered for sale by private contract.  The works are situated in the midst of an extensive agricultural district where the demand for brick and tile is great.  The clay, which is of first-class quality, is abundant.  The machinery and other plant are new and of the best description, and the rent payable under the lease is very moderate.  Offers for the whole, including the stock, to be lodged on or before 4th prox, with Messrs D. & W. Smith & Bennet, Solicitors, Arbroath, by what all requisite information will previously be afforded. Arbroath, 24th November 1879. N.B.-Satisfactory reasons for disposing of the work will be given if required.

22/04/1881 – Dundee Advertiser – Fire at a brickwork – On Wednesday the brick and tile work at Luthermuir, Laurencekirk (Primrosehill ?) belonging to Mr John Alexander, was discovered to be on fire. Before the fire was observed it got such a hold of the premises that it was impossible to save any of it, and the drying sheds, engine house, barrows, planks and everything in connection with the work were totally destroyed. Unfortunately, no part was insured. The loss is estimated to be considerably over £400.

1901 – Primrose Brick and Tile Works, Luthermuir, Marykirk – disused – only the claypit is outlined.