Below – 1859 – 1861 – Leysmill Brick and Tile Works – Although not referred to by name they would have been situated at this locus. 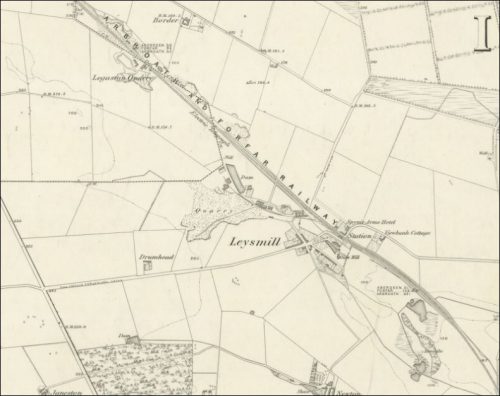 09/03/1860 – Montrose, Arbroath and Brechin Review – Sale of tiles, bricks and implements and utensils at Leysmill Brick and Tile Works. There will be sold, by public roup, on the ground at Leysmill, on Thursday, 15th March next, the whole remaining stock, comprehending drain tiles, pipes and bricks, fire clay and common clay chimney cans, chimney linings, and flue covers, &c. Also, machines and implements used at the works, consisting of Ainslie’s Improved Patent Machine for making tiles, Norton & Borrie’s Patent Machine for making tiles, machine for making hollow bricks, tables, barrows; a large assortment of moulds for pipes, bricks and cans; a great quantity of shelving, &c. Catalogues of the sale will be obtained on application to Mr David Straton, manager at Leysmill Quarries, by Arbroath. The roup will begin at the works, which are close by the Leysmill Station of the Arbroath and Forfar Railway, at eleven o’clock, forenoon. Kinblethmont, by Arbroath, February 17, 1860.

11/05/1860 – Montrose, Arbroath and Brechin Review – Leysmill Quarries. These extensive quarries so long carried on by, and the property of, the late W. F. L. Carnegie, Esq., have been taken on lease from the present proprietor, Captain H. F. Carnegie, for five years, by Mr D. Stratton, formerly founder and coke manufacturer, Arbroath, and Mr Cargill, Leysmill, who has also entered on a lease of the farm of Kinblethmont, the home farm only being to be kept. The brick and tile work at Leysmill has been disannulled, the machinery in connection with which was sold by public roup last week.