Canmore – The remains of this small industrial complex stand on the edge of marshland about 400m NE of Foreland House. The L-shaped layout consists of a drying shed, engine-house and kiln, and there are traces of clay pits nearby. The foundations and upstanding masonry piers are all that now survives of the former drying shed. It measures 30.6m in length from N to S by 8.3m in overall width. The piers, which divide its length into ten bays, stand to a height of about 3m and are battered externally. The engine house is a roofless shell about 10m square, at the centre of which are the remains of a cylindrical clay-mixing machine of cast iron. This measures about 0.8m in diameter and was formerly horse driven by an overhead shaft from an internal horse gang. The ruinous kiln, which forms the west limb of the layout, is of a two-aisled updraught type, measuring just over 14m from N to S by 9.7m transversely and incorporating vaulted and buttressed side-aisles about 3m in width. This is almost certainly the plant that was described in 1843 as having lately been erected for making drain tiles.

06/12/1847 – Caledonian Mercury – Scots Bankrupts – Walter Frederick Campbell Esq, Islay, shipowner and manufacturer of tiles and bricks in the Island of Islay and Sheriffdom of Argyle and coalmaster at Woodhall in Lanarkshire. Creditors meet in the Argyle Hotel, Dunoon on 15th December and 5th January, at one o’clock.

08/09/1848 – Glasgow Herald – A Public sale in Edinburgh of the very extensive and valuable Barony and Estate of Islay … There is a brick and tile work on the estate, in full operation which affords important aid in the drainage and other works of improvement in progress.

21/02/1853 – Caledonian Mercury – States of affairs of Walter F Campbell, Esq of Islay, shipowner and manufacturer of tiles and bricks in the Island of Islay and sheriffdom of Argyll and coalmaster at Woodhall in Lanarkshire lie with James Brown, Accountant, Edinburgh.

18/02/1863 – North British Agriculturalist – Dividends. Creditors of Walter Frederick Campbell, Esq, of Islay, shipowner and manufacturer of bricks and tiles on the Island of Islay and sheriffdom of Argyll and coalmaster at Woodhall, Lanarkshire will receive a dividend at the chambers of James Brown, accountant, 128 George Street, Edinburgh on Friday 3rd April. James Brown, trustee.

Below – 1878 – OS Map showing the likely position of the former Foreland or Islay Brick and Tile Works as referenced by the Clay Pits to the North of Foreland House. 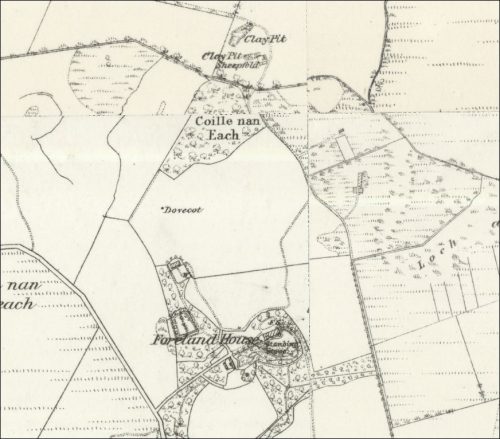