Scientists are busy investigating the discovery of a human skull believed to be of great antiquity which has been found at brickworks at Pollok, Glasgow during excavations. The brickworks belong to R & D Adam. The skull which is now in the Scottish National Museum of Antiquities is in a semi fossilised condition and a report upon it by Sir Arthur Keith, the eminent anthropologist is eagerly awaited. So far anthropologists have not been able to put a definite date to the skull, pending the lack of other corroborative evidence.  Comparison between the Pollok skull and other famous skulls which have been made by Sir Arthur Keith would seem to indicate that this new relic of ancient man, dates from the Neolithic period if not earlier.

Sir Arthur Keith’s view – Sir Arthur Keith has already written a preliminary report upon the skull and his report is in the hands of the authorities in Edinburgh. From this, it appears that Sir Arthur is reluctant to dogmatise upon the age of the skull unless implements pointing to a specific era in man’s development and geological evidence of sufficient weight are forthcoming.

The exact position where the skull was is not known but from traces found of vivianite which it bears, it seems to have come from a peat layer formed of grasses and mosses which had formed the floor of a hut, the walls of which had been formed by wooden piles. At the moment the geological work is in the hands of Dr Murray McGregor of the Geological Survey while the general investigations are being undertaken by Mr A.J.H Edwards, assistant Keeper of the National Museum of Antiquities who sometime next year hopes to describe the discovery to the Society of Antiquaries of Scotland. The foundations of 4 or 5 huts covered with the peat-like layer and consisting of pointed wooden piles were encountered while a considerable number of animal bones including some of ox were found. Only 2 recognisable artefacts were recovered. One is a stone ponder and the other a sharpened tine of the antler of a red deer, but unfortunately, those can not be assigned to any specific period.

The discovery – The credit of this important discovery is due to Mr Adam, FSA.Scot, the lessee of the clay pit. Describing what led to the discovery he said – “It was some months before we realised how important a bearing the find would have upon the scientific knowledge of ancient life and custom in Scotland. How we came to think of the skull as being something more than a mere ‘find’ was in this way. We observed a peculiar bluish material on the bones, and on some peat which we had dug up and which contained scraps of bones. At first, I believed that this was pitchblende which contains radium, and thought we had made a great discovery from the point of view of humanity. I had it analysed, however, in Glasgow, and it was then learned that this material was Vivianite. This set us on the track and the experts on these matters became interested and in a short time, considerable investigations were being undertaken. The skull was taken by Mr Edwards to London where  Sir Arthur Keith and other eminent authorities were soon engaged in the examination of the bones. I later received a letter from Mr Edwards stating that in the opinion of Sir Arthur Keith, the skull was probably the oldest ever found in Scotland. Sir Arthur has since engaged in an even more closer study of the question.

Evidence of ancient dwelling – In addition to the peat and bones and skull, we found evidence of ancient dwelling. There were a number of piles or staples in the ground which I surmise made the support for the vegetable matter which formed the roof of the dwelling. There were piles for 5 houses, indicating dwellings of 12 feet by 8 feet. The biggest pile is 4 foot 6 inches in length. There was also a long sharpened instrument which is believed to have been used as a borer and also other instruments. Altogether the discoveries are amazing in that for the first time we have got a man in all his aspects. We have the man in that we have a skull, we have his dwelling, his tools and we also have a spearhead. Some of the things discovered show marks caused probably by the ice pressing upon them. Near the house we call number 4 house, we found an ancient sandstone which we think was used for breaking bones for we found many pieces of bones in the peat nearby. The pieces of peat we have are full of bones and vivianite. Among the peat, we found a stone with what seems to be the engraving of a bear. 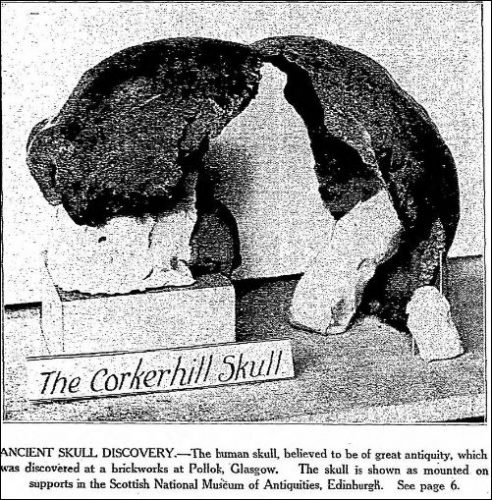 Below – 18/12/1937 – The Scotsman – Important sale of brickmaking plant and machinery, brick buildings etc at Pollock Brickworks, Cardonald and on the instructions of Messrs R and D Adam Ltd. 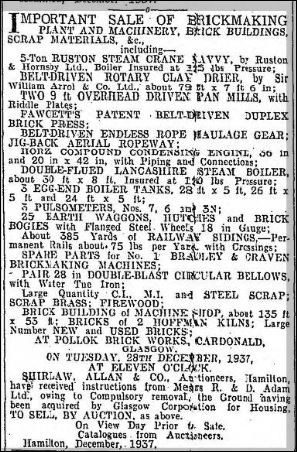