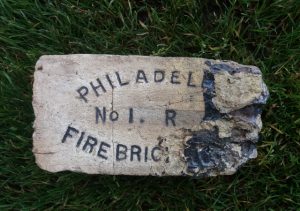 Found at Bo’ness, Firth of Forth, Edinburgh.

This is a firebrick stamped ‘Philadelphia No 1 R Fire Brick”.

(Note – SBH – presume it should read ‘Fire Brick Works’ and there may be part of the stamp missing from the middle line too. There may be a letter ‘A’ to the right of the ‘R’).

This is believed to be an American import and manufactured by the Philadelphia Fire Brick Works. 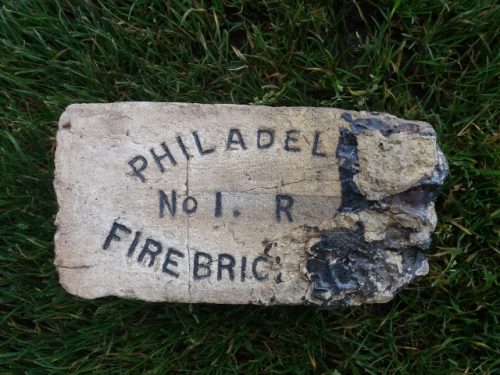 Carla Welsh states – (May 2020) Hello, I just found the same brick outside of Philadelphia, PA in the United States. Found it along the Darby Creek by the Swedish Cabin that was built in 1638 in Delaware County. This area goes back to the first settlers who were Dutch in the early 1600s … later on, it was mostly all German, Italian, and Irish immigrants that moved here from 1850 on up. I can’t find anything online so I looked on Facebook and saw your post. My brick looks to say Philadelphia, No. ___, M___, Firebrick____. Can’t quite make it out. Very interesting you have the same brick in the UK. Did u ever find out anything about it? I assume it’s from 1890-1920?
Jean Bear states – According to IBCA Librarian Jim Graves’s research, Philadelphia Fire Brick Works produced firebricks from 1856 to 1925, in Philadelphia, PA, USA.
Below – This broken brick was found by Ian Suddaby at the same location and appears to show the part of the stamp that is missing from my example although the spacing of the words and in particular the lettering in the middle line may be slightly different. 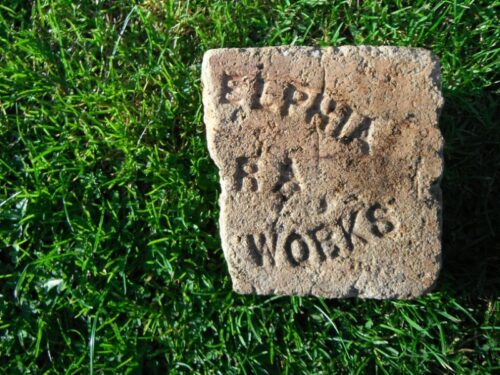 Many thanks to John Morgan, USA who forwarded this photograph of other variations of the Philadephia brick including one stamped ‘Extra’ which may be very similar to the one by Ian Suddaby. 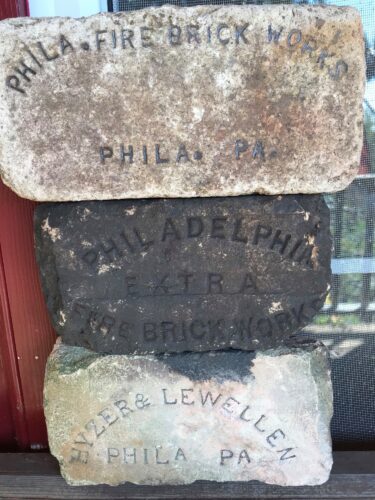