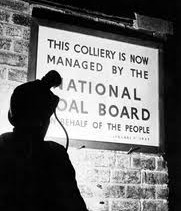 (Littlemill Brickworks – Note – SBH – It is believed that these brickworks were also taken over by the NCB).

Does anyone know if the NCB automatically added NCB to the brickmarks of the Companies they took over? I am not sure that they did as I would have thought the NCB mark for each company above would have surfaced by now and been photographed. I am not aware of any Brucefield, Meta, Newbattle or Blairadam bricks stamped NCB being found. Is anyone in the know?

30/05/1949 – The Scotsman – The National Coal Board – Divisional brickworks superintendent required in Edinburgh for Scottish Division. Applicants should have had wide experience in the application of modern mechanical handling methods at brickworks and in the efficient production of the raw material. The brickworks superintendent will be required to advise on the reorganisation of existing methods at the Board’s brickworks. Applications stating age, qualifications, experience and present appointment and salary should be submitted to the Establishments Officer, National Coal Board, 1 Eglinton Crescent. Edinburgh 12, within fourteen days.

Tagged with: National Coal Board