15/03/1864 – Glasgow Herald – Coal. Wanted. Written offers for a continuous supply of the undernoted qualities to be delivered to Marrtflatts Brickworks close to the Moss Road siding of the Glasgow and Paisley joint line. Best Wishaw main coal and second do, best triping and second do and best dross and second do. Address W. Renny Watson, 1 Royal Bank Place.

16/04/1868 – Greenock Telegraph – A fatal accident occurred within the patent brickworks at Merryflats, Glasgow, on Tuesday afternoon. A lad of sixteen years of age, named John Stevenson, whose duty it was to clean the instrument employed for crushing the clay, entered the pulveriser for a second time without anyone being aware of the circumstance. His position not being suspected, the machinery was set in motion, and he was crushed to death.

01/07/1868 – Edinburgh Evening Courant – Court of session – first division. June 27th. Leck V Merryflats Patent Brick Company. In an application for an interdict at the instance of the complainer, proprietor of the lands of Upper Merryflats, against the respondents, lessees of the ground, the Lord Ordinary interdicted the respondents from using a certain tramroad, in so far as constructed on the property of the complainer, for the carriage of materials from the Glasgow and Paisley joint line of railway to the site of a poorhouse and other buildings connected therewith, proposed to be erected on the lands of Lower Merryflats, or for any other purpose than that of the carriage of materials for the use of, or manufacture at the respondents’ works. The respondents reclaimed, but the Court, while varying the terms of the interlocutor in the respect that the latter portion was too vague, adhered, holding that the respondents could not be allowed to invert the nature of their possession, and turn the ground, let to them for one purpose, to a different use.

30/09/1868 – Glasgow Herald – To let. The Merryflats Patent Brickworks. Machinery can produce 40,000 per day. Hoffmans patent kiln burning bricks with 3cwt of dross per M., can be seen in operation. Apply at the works, Govan.

1871 – John Thomson, brickmaker, Murrayflats (Merryflats), by Govan. Ho, 59 Love Street, Paisley. (Note – SBH – This may be the same John Thomas as was involved with the Victoria and Williamsburgh Brickworks).

05/12/1873 – Glasgow Herald – Govan. Feuing lands and clay field. For sale. The lands of south Merryflats, extending to 29 acres 3 roods and 31 70 poles imperial, situated close to the Moss Road Station of the Glasgow and Paisley Joint Railway, and as possessed by the Merryflats Patent Brick Company.  The clay, it is calculated, will last for many years and the ground being perfectly level, and having a supply of water for steam purposes, is well adapted for public works.  Apply to Messrs Black & Honeyman, Writers, West Regent Street.

19/06/1874 – Edinburgh Evening News – Fatal accident in Glasgow – On Wednesday afternoon a labourer named Patrick Murray was killed at the Merryflatts Brickwork, Govan. He was attempting to leap upon a waggon which was in motion, when his foot slipped and he fell on the rails, and one of the wheels of the waggon passed over his chest.

Below – 23/10/1874 – Glasgow Herald – The lands of south Merryflats as possessed by the Merryflats Patent Brick Co, Govan, Glasgow is for sale as a potential clayfield. (Note – SBH – I am not sure if this is the same area of land that was for sale the previous year or an additional area?) 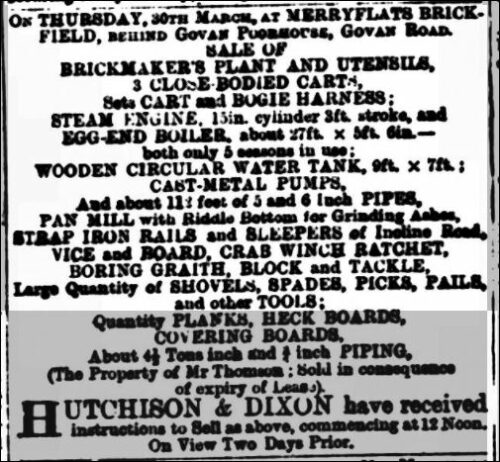 09/04/1879 – Glasgow Herald – Properties for sale by private bargain and in whole or in lots. 1. The lands of Langlands in the parish of Govan consisting, so far as not already feued. of 18 1/2 acres or thereby, of eligible feuing ground with the minerals therein, consisting of coal and ironstone. There is a considerable rental derived from the buildings and brickfield on the lands. 2. The lands of Merryflatts adjoining Langlands, consisting of 30 acres or thereby, eligible feuiug ground, with the minerals therein, consisting as abore. A considerable part of the price of both properties might be allowed to lie on bond. The feu duty is illusory in both cases. Mr John Gribbin, residing at Upper Merryflatts will point out the boundaries of the lands. …

Below – 1894 – Merryflatts. Although the brickworks are not marked as such it is highly likely that the notation for ‘Merryflatts’ represents the site of the brickworks. 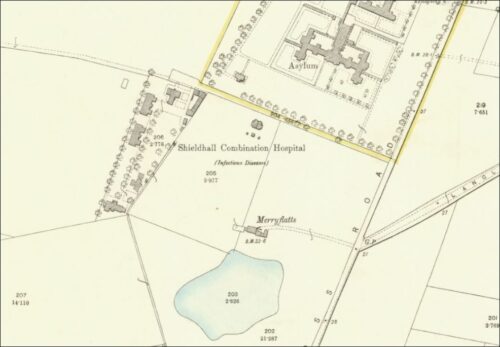