Below – 09/12/1864 – Glasgow Herald – To master brickmakers and others. Wanted by a practical Englishman, a situation as manager, foreman or contractor. Has perfect knowledge of making and burning perforated or other kinds of wares; well acquainted with brick machinery. Two years in the present situation leaving through his present employers giving up the Works. Good reference. Apply to Wm. Cox, Manager, Ormeau Brickwork, Ballynafeigh, Belfast; or to Robert Adams, Love Street Brickworks, Paisley. 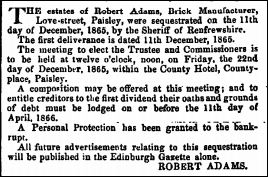 06/01/1866 – The Renfrewshire Independent – Sheriff Court Paisley. Before Sheriff Cowan. Examination of Robert Adams, brick manufacturer. Present, Mr Robert Boyd, accountant, trustee; Mr James Caldwell, writer, agent in the sequestration; Mr David Campbell, writer, and Mr George Hart, writer, agents for creditors. The bankrupt deponed – l commenced business in March 1864 as a brickmaker in a field adjoining Love Street, Paisley. Prior to that time, I had been a foreman to Mr Robert Brown, brickmaker, Shortroods. Mr John Bell was the proprietor of the field. I had a lease from Mr Bell for the use of the brickfield, dated 4th March 1464. When Mr Bell spoke to me about commencing business, he said he had the prospect of purchasing a field, and that he would take me in as a partner; but that as he did not wish the public to know that he was in the business, he said he would like it to be conducted in my own name. I said I would rather not, as I thought be might not stand at my back to support me in the event of any difficulties arising. He said he would not deceive me – that he would stand at my back. After the lease was signed, we had one particular conversation about our being partners. Mr Bell was to get a lordship of 5s a thousand bricks, and I was to get all the profit that was left. I expected we were to share the losses alike, but we never had any conversation on this point. Prior to the last month, I told all my creditors that Mr Bell was a partner. This was after I had suspended payments, but I never told anyone before that because Mr Bell did not want it made known. I had no capital when I commenced business. It was arranged between Mr Bell and me that I was to go to him on the pay nights and get the money to pay the workmen. I did so, and he advanced all the money for a certain time, down to the end of July 1864. I can’t tell the precise amount he advanced, but it would be about £20 or £30 a fortnight. I gave Mr Bell £130 in October last. At the same time, I paid Mr Wm. Hill, coal agent, £24. After I became insolvent, Mr Bell wanted me to sign a trust deed, which I declined to do, as there was no provision in it for my family. He said he would give me money to go abroad. He first offered me £5 for this purpose, but I said that would not do. I consulted a writer in Glasgow about taking out sequestration for me, but I paid him no money. I did give him a sum of £5 but it was about six weeks previous to my sequestration being taken out. The second time I called upon him I gave him the £5. The money was for advice. I just handed him the money. I had two horses, and it was arranged that one of my creditors should take one of them and work it for its meat; the other horse was let out by me one day to graze in the field adjoining my house, from which it disappeared, and I don’t know where it is. I have made up a statement of my affairs which I handed to the trustee, and which I think is correct. The liabilities are stated at £578 17s 1/2d, without including rent or money advanced to Mr Bell. If the rent and the money advanced by Mr Bell, after deducting what was repaid him, had been added to the liabilities in my said state of affairs, it would have been £748. The assets are £63 8s 1d. I account for the difference as follows – Smith and Young were paid £40 for wood, and I am owing them £16 used for starting the work. I paid£25 for building the chimney stalk and engine seat; about £17 for boggies and barrows; about £12 for iron foundry work; about £18 connected with the building of the engine seat; plumber work £12; another sum of £17 for the smith work of the boggies and barrows. I account for the remaining difference in this way, that the bricks were never sold at a price sufficient to defray the cost of making. I regularly consulted Mr Bell as my partner. He also made out my accounts but never discharged any workmen – The examination was then adjourned.

Below – 27/01/1866 – Paisley and Renfrewshire Gazette – Brickfield in Paisley to let – To let on Lease, for such number of years as may be agreed upon, The Love Street, Brickfield, lying betwixt the foot of Love Street and the Greenock Road, Paisley, with the dwelling house, stables, barn and loft, as recently occupied Mr Robert Adams. There is a plentiful supply of excellent clay on the field, and, from its proximity to the town, it well adapted for carrying on the business of a Brick and Tile Manufactory. There are a steam engine and gearing, boiler, stalk vent, brick machine, and other fittings and erections on the premises, which could be taken by the tenant at a valuation. Apply to Mr James Caldwell, Writer, No. 33 Old Sneddon Street, Paisley. Paisley, January 1866. (Note – SBH – I am uncertain whether this is a reference to the Victoria Brickworks of the clay pits shown on the associated 1895 map) 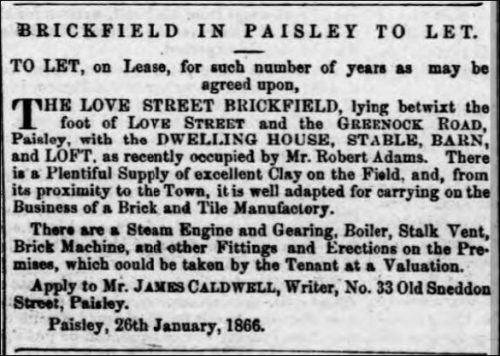 01/05/1866 – Edinburgh Evening Courant – Creditors of Robert Adams, Brick Manufacturer, Love Street, Paisley will receive a dividend at the counting-house there, of Robert Boyd, accountant there. 12th June.
27/04/1867 – Renfrewshire Independent -Theft – A journeyman engineer in town was brought up charged with having on Saturday been found in the Love Street Brickwork occupied by John Bell, with intent to steal and being previously fined 10s 6d for a similar offence, he was sentenced to 10 days imprisonment.
Tagged with: Love Street, R and D Adam, Robert Adams