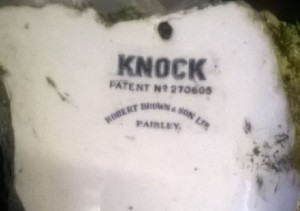 Found by David McGarrigle in Paisley

A broken section of sanitary ware 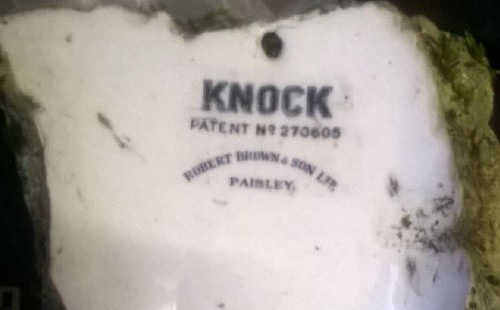 of Kaiser Wilhelm 11 was last week sold in Glasgow. It took the shape of a three-piece bathroom suite.

On its voyage of good use since the Kaiser’s boat, it had been working in a house in Fife.

On Saturday it was auctioned to a dealer in Edinburgh for £500.

On the wc item – and this is very interesting – was proclaimed the name Knock of Paisley.

That is the story so far. The tale was adorned with a photo in the Herald last week.

Today’s mission is to find the maker. Paisley talks a lot about its historic builders of

thrones for bathrooms. (Mr Shanks was a Paisley man; Mr Doulton had a factory there.). Yet

the early signs were that written history has flushed Knock from its pages.

Ellen Farmer, president of the Old Paisley Society, said: “I saw the story in the paper, but

I’ve not heard of him. I’d been meaning to look him up in the old directories.” Ken

Valerie Riley, keeper of local history at the museum, had been asked by the auctioneers

about Knock. “I sort of drew a blank,”. She said. Sylvia Clark, an industrial archaeologist,

who has almost finished writing a history of Paisley, mentioned another town firm, called

Brown, who also made the bricks. But Knock? Never.

So I took the problem out of Paisley along the route that Mr Shanks took: from plumbing

in Paisley, his firm started in ceramic engineering before the end of last century in Barrhead.

After all that time, Barrhead has the deepest collection of loo lore in Scotland. “I can’t say

Saturday. Was there nobody out there?

Knock, whoever he was, had to be famous. Short of being given a place in dictionaries,

like Captain Boycott or Lord Sandwich, there is no more enduring way for a man to keep his

name in the public eye than on a wc.

although some of the firms they started do not. Their fame was more than merely

industrial. They were heroes in their own households.

Their daily work out them next to being godly. Before them, people remembered, the job

rose, which was one way of putting it, or to pick a daisy, which was another.

And Paisley’s place in the revolution of the smallest room, which the medieval monks

called the necessarium, was glorious.

Robert Brown, the company mentioned by Sylvia Clark, was exporting to America as

early as 1870. Mr Doulton gave his address as Lambeth, Paisley, and Paris, which showed a

title on one of his posher pedestals. It came in blue, magnolia or wild rose. Thereby was

the rest of the world given the chance to rubbish Paisley in a most cruel and personal way.

pan) came up with one further Paisley pearl. There was once a loo called Seestu, which is

the lyrical name given to the town by its poets. Not many people know that.

else – pieces of sculpture, say, or a Greek column. Thrones were sometimes sat on the

backs of recumbent lions or on swans in flight.

day’s search. His name was Steven Hellyer. He was a kind of high priest of Victorian

plumbing and wrote books about it.

sculpted knobs on the outside because it would mean much extra work for house servants.

He wrote: With the utmost care in using such closets as urinals, it is impossible at all times to

urinate into the basin so neatly that splashes, mishaps, and drops … Shall not fall upon the

edge of the basin and run down over its exterior parts.

same. I have nothing else to show. Tracing Knock has KO’d me. Any of you who have

thoughts, please share them. Distance is no object. I’d even spent a penny for them.

On the subject of spending a penny. I do not expect soon to come upon a more flagrant

expression for having to go to the necessarium than one about plucking a rose. During the

glum depths of the afternoon, however, I came across a French phrase that was rewarding.

During the war, nice-minded patriots who had to go to a place took to saying: Je fails

telephoner a Hitler. It’s not much to learn from a whole column of ink, but it’s all there’s