Scottish immigrant James Glover is credited with initiating the local (Bolivar, Westmoreland Co.) firebrick business. He reportedly worked in the Mt. Savage, MD, clay mines before discovering the deposits at Bolivar in 1842. Township tax assessors recorded a brickyard in Fairfield Township in 1846 when Baxter, Glover, Harley and Company were taxed for 250 acres, one sawmill, four horses, and one “fire brick factory”. Five years later the partnership was reformulated as Glover and Kier and Company. Samuel M. Kier was a western Pennsylvania entrepreneur who later began a brickworks in Salina. In 1851 he and Glover were operating two “brickworks” at Bolivar and by 1856 had built 14 tenant houses for their employees.”

Thereafter the companies went through periods of consolidation, restructuring, demise and constantly changing partnerships so it is difficult to track ownerships. In 1876 there were four brickyards at Bolivar. An 1876 Atlas map identifies three of them (none known as Glover and Kier). Kier did continue in Salina PA and apparently many of the “company buildings” both residences and businesses still survive.

James Glover, b. in Scotland (Possibly Edinburgh). He married Jennet Shearer in September 1822 in Stevenston, Ayr. He and his wife Jennet, emigrated and settled in Fairfield Township, Westmoreland County, in the 1840s. James manufactured the first fire-brick made in the United States, using the process he invented. Eventually, he owned business establishments at Appollo, PA, Mount Save, Maryland, Highland Station, PA, and Wampum, PA. They were Presbyterians. James and Jennet were the parents of John, Cornelius, Robert, Agnes (Mrs. William Carson), Emily (Mrs. Joseph DuShane, and Mrs John Melrose), Mary Jane (Mrs. Patterson), Clemma, and Elizabeth. After Jennet died in the 1860s, James married Mrs Lucinda Bittner and lived in Pittsburgh, PA, dying there on 20 January 1886. He and Jennet are said to be buried in Fairfield. Source

(Note: It is unlikely Glover made the first firebrick in the USA but he was certainly an early manufacturer of same)

Scottish immigrant James Glover is credited with initiating the local brick industry. He reportedly worked in the clay mines of Mt. Savage, Md., before discovering similar deposits at Bolivar in 1842. The raw material was suited for making firebrick, or refractory brick, which could withstand heat and was used in the construction of coke ovens and iron furnaces.

“Later on they saw a use for them as pavers,” Jeff Miller said of the locally produced bricks. “But the really big-ticket item was refractory bricks.”

A Saltsburg area native who went on to fame as an inventor and petroleum pioneer then entered the picture.

“Samuel Keir, the father of petroleum refining, had an interest in a canal boat business and brickyards in Bolivar and Salina,” Miller noted.

In 1851, Keir and Glover were operating two “brickworks” at Bolivar and by 1856 had built 14 tenant houses for their employees. By 1876, the town had four operating brickyards.

Soon, the growth of the community prompted a petition to incorporate as a borough distinct from Fairfield Township, a request granted in 1863.

According to a 1906 “History of Westmoreland County,” the population of the borough was 378 in 1880 and the town’s prominent buildings included two hotels and a Methodist Episcopal church.

At that time, the text notes, the brickyards employed more than 100 men and each year processed upwards of 20,000 tons of clay and shipped about 2,000 tons of bricks. Source

Among the earliest refractory operators in the county was James Glover, who began shipping fire brick by boat to Pittsburgh from his new plant at Bolivar in the early 1840s. In 1845, Samuel Kier, a Pittsburgh merchant and canal shipper, built at Salina a works for making fire brick (#123) and shipped his products via the Pennsylvania Main Line Canal to Pittsburgh, where there were growing numbers of iron rolling mills. Source

08/10/1862 – Pittsburgh Daily Post ( Page 3) – Refers to James Glover as a ‘pioneer in the manufacture of fire brick in this country ( USA) which is a sure guarantee as to their quality. 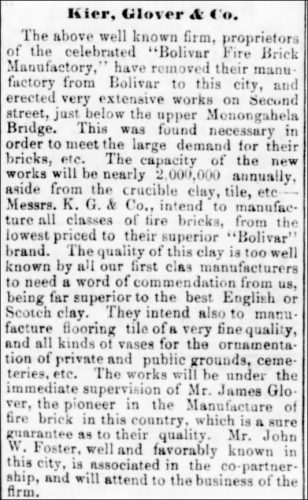