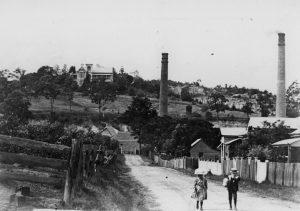 James Campbell (1830-1904), businessman and manufacturer, was born on 6 March 1830 at Auchterarder, Perthshire, Scotland, son of John Campbell, farmer, and his wife Helen, née Morison. Trained as a plasterer, he took an assisted passage to Moreton Bay, arriving in Brisbane by the John Fielden on 12 June 1853. Finding little work at his trade, Campbell took other building jobs and opened a store for building materials in George Street in 1854; he soon moved to Creek Street. Demand increased substantially in the 1860s and Campbell found an expanding market for the lime, cement and plaster he won from the corals of Moreton Bay. In the 1870s he began milling and selling timber procured initially near Brisbane and Ipswich. He also purchased several ships and built up a thriving shipping trade. The firm James Campbell & Sons was founded in 1882.

The exhaustion of local timber forced Campbell to cover much of the coast from Gympie to Kyogle, New South Wales, with numerous mills. The sawn timber was shipped to the firm’s wharf near Creek Street in its own ships. In the 1880s and 1890s, the firm diversified its activities, prefabricating houses and buying Petrie’s quarry at Albion, the Buderim sugar-mill and the Redbank brickworks. In 1896 it became a limited liability company.

Campbell was described as quick-tempered, easily provoked and easily appeased. A born fighter and political radical, he was involved in the Queensland Liberal Association of the 1850s, spent two years as an alderman of the Brisbane Municipal Council and was also a member of the Ithaca Shire Council. A frequent press correspondent on what he saw as injustices, he was an unofficial spokesman for migrants, particularly Scots, and befriended many. He was an ardent advocate of improved working conditions and gave his men the eight-hour day willingly. He refused, however, to accept trade unions, but was respected by his men for his strong personality and genuine charity.

Throughout his life, Campbell remained a strong Scots patriot and was a committee member of the Caledonian Society from its inception in 1861 and of the Queensland Scottish Association. He visited Scotland after his retirement in 1896. Brought up as a rigid Calvinist destined for the Presbyterian ministry, he rebelled and became aggressively anti-clerical. He died of chronic hepatitis on 11 April 1904 at his home at Kelvin Grove, Brisbane, and was buried in Toowong cemetery. At his own request, there were no religious rites but his old friend S. W. Brooks delivered a eulogy at the graveside. In memory of his foundation membership of the Brisbane Gymnasium, a son equipped a gymnasium at Fortitude Valley.

Campbell had married Mary Isabella Mitchell at Callander, Perthshire, in February 1853; seven children survived him. His daughters married William Aplin, (Sir) Robert Philp and James Forsyth. Of his sons, John Dunmore (1854-1909) was born in Brisbane on 19 April 1854 and was baptized by Rev. John Dunmore Lang. Educated at the Brisbane Normal School, he left early to join his father’s business. He received a partnership in James Campbell & Sons and when the firm became a limited company in 1896 was appointed the chairman and managing director. Particularly interested in the timber trade, he spent many years in the north coast district mainly at the firm’s Coochin Creek sawmill, Campbellville. A strong advocate of reafforestation, he was elected to the Caboolture Divisional Board in 1883 and urged the government to open up the district with a railway. He spent nine years in local government and in 1889-90 was president of the Brisbane Chamber of Commerce. Concerned, too, with the improvement of harbour facilities, he was a member of the Queensland Marine Board in 1890-99.

Campbell won West Moreton in the Legislative Assembly in 1899 and held it until just before his death. He opposed Federation, believing that it was premature and could damage Queensland, and he had a brief undistinguished term as minister for railways in the 1907-08 ministry of his brother-in-law Philp. Outside politics Campbell was associated with many organizations. He was a councillor of the Industrial Association of Queensland in 1890-93, a vice-president of the Queensland Employers’ Association in 1893-96, and a member of the Brisbane Hospital Committee of Management in 1893-1907. From 1894 to 1905 he was a vice-president of the Queensland Rugby Union. A visit to England and the United States of America in 1906 stimulated his interest in migration and in 1907 he was president of the Queensland Immigration League. He died of cerebrovascular disease on 19 June 1909 and was buried in Toowong cemetery with Presbyterian forms. His estate, valued for probate at £13,067, was left for the benefit of his wife Mary, née Cameron, whom he had married at Brisbane on 11 May 1876, and their nine surviving children.

His brother Charles William (1871-1949) was born in Brisbane on 28 May 1871 and educated at Brisbane Grammar School. Managing the firm’s Albion sawmill, he pioneered the export of Queensland timber to Melbourne by rail. He was an alderman of the Hamilton Municipal Council in 1912-19 and mayor in 1916-17; when Hamilton was absorbed by ‘Greater Brisbane’, he represented the suburb on the Brisbane City Council in 1926-31. Chairman of the Clayfield Nationalist Political Association, he was president of the Queensland Employers’ Federation for fourteen years and was connected also with the Brisbane Timber Merchants’ and Timber Export associations, and the Queensland Society for the Prevention of Cruelty to Animals. In his youth, he was a well-known boxer and crack rifle-shot. In April 1897 he had married Minnie Hill; they had six children. He died at Clayfield on 3 July 1949 and was cremated. His estate was valued for probate at £33,584 in Queensland and £3181 in New South Wales.

Operations: c.1854 – 1903 (Redbank); ca.1883 – 1950s? (Albion). The firm of James Campbell and Sons was one of Brisbane’s earliest and longest established suppliers of building materials, which in the second half of the 19th century specialised in the retailing of lime, cement, plaster, paints and timber, and operated saw and planing mills, plantations, lime works and pottery kilns in a number of locations in southeast Queensland, as well as Campbell’s wharf and warehouse at Creek Street, Brisbane, and a substantial fleet of freight vessels. James Campbell and Sons Ltd became one of the great success stories of locally-derived Queensland commerce/industry.

From 1896, the Redbank Brickworks continued to make bricks until 1903 when the machinery was transferred to the new site at Albion, in Brisbane.

In the early 1850s, James Campbell, a Scotsman, chose Redbank to build a village and start appropriate industries.  He chartered a ship, loaded it with timber, machinery, implements and other items necessary to commence his venture.  The Redbank settlement comprised brickworks, saw-mill, stores, several cottages, a school and a church, where different denominations worshipped.  The clergy came from Ipswich when available.  Campbell later entered into a partnership with Mr Robert Towns, a noted pioneer.

Very little is known of the Redbank Brickworks which was established at this time, except that it closed down with the failure of the settlement.  However, the company James Campbell and Sons, which was established in 1854.  In 1885, when James Campbell purchased the financial interests of George Fischer, which included a pottery situated in Mine Street, Redbank where the old clay hole and the pottery owned by Mr Milner still stands.  The original Redbank brick-works was much closer to the river, somewhere behind where the Railway Workshops now stands.

From 1896, the Redbank Brickworks continued to make bricks until 1903 when the machinery was transferred to the new site at Albion, in Brisbane.