04/04/1874 – Hamilton Advertiser – Serious Accident to a Colliery Manager – On Monday morning, Walter Harvie, manager, Dykehead Colliery (Wrought by Mr Robert Ure, East Kilbride) met with a serious accident. About 10 o’clock he had been engaged in taking a piece of coal off a stoop in the Pyotshaw seam of the pit in question when a lump weighing between 2 cwts and 3 cwts fell from the stoop, and, striking him on the abdomen, he was thrown to the ground and jammed between two pieces of coal. The only other man in the pit at the time was a pony driver named Wining, to whom Harvie called for assistance. He was with difficulty extricated; and on Dr Robertson being sent for, he found that Mr Harvie’s spine was fractured and that other severe injuries had been sustained. (Note – SBH – Is this the same Robert Ure, as referred to below?)

14/01/1879 – The Scotsman – Glasgow Bankruptcy Court – Robt. Hamilton &. Co ., brickmakers, Greenfield Brickworks, Hamilton, were examined in bankruptcy before Sberiif Guthrie yesterday. Clement Hamilton stated that he and his brother Robert commenced business in 1874, with a capital of £ 1720, of which £300 was their own and the rest borrowed. The business was in two departments, brickmaking and brick building. Their losses had been caused through the brickmaking department, the other always having paid, and the immediate cause of their stoppage was the total collapse of the building trade. Robert Hamilton concurred in his partner’s deposition. The liabilities were stated at £2524 10s 7d and the assets, less preferable claims, at £486 12s 10d. The statutory oath was administered. 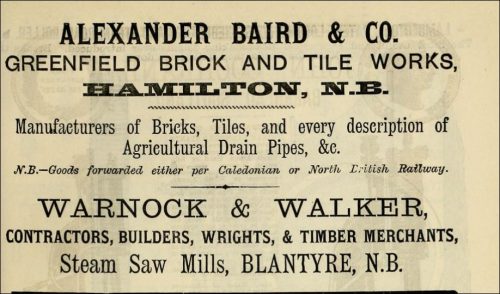 Below – 1897 – I cannot see the Greenfield Brickworks actually detailed on a map but Greenfield was just North West of Hamilton and the brickworks would likely be part of Greenfield Colliery. 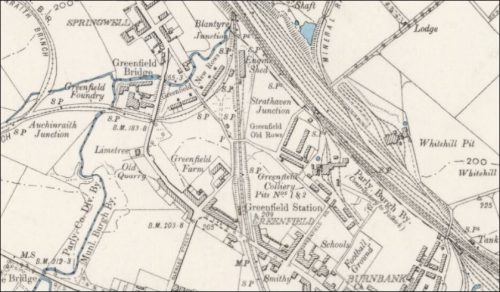