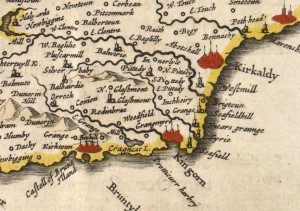 I am assuming these are not the same as the Broomlees Brick and Tile Works, Fife or the  Grange or Earlsferry Brickworks near Elie, Fife.

Below – 28/05/1846 – Fife Herald – This could be the start of the Grange Brick and Tile Works. Lime Quarry and brick and tile work in the parish of Kinghorn and the County of Fife. To be let … The Grange lime quarry with fire clay and common clay … situated halfway between the towns of  Kinghorn and Kirkcaldy, close to the turnpike road and the Edinburgh and Northern Railway. The clay and limestone lie together and there is plenty of coal in the immediate vicinity. Water power could be obtained at a small cost. For Particulars … Mr J.L Gow, Raith, Kirkcaldy will give directions for showing the ground. 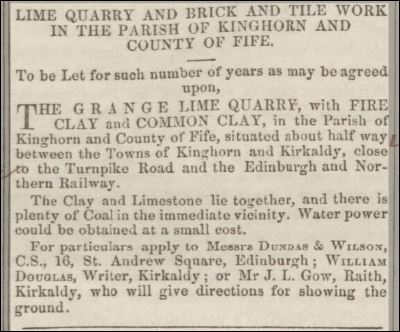 No written records have been unearthed as yet but it is highly likely that the maps below depict the brickworks.

Below – 1855 – Grange Farm, Kirkcaldy. Note the round kiln like structure and a possible boot-shaped claypit at the farm. This map also shows Seafield Field Tower and the field to the north which is referenced as the possible site of the clayfield in the article below dated 08/11/1952.

03/01/1856 – Fifeshire Journal – Kirkcaldy and district. Workmen, while employed in digging fireclay nearly 50 yards within the high water mark, in the neighbourhood of the Grange Tile and Brick Work, fell in with the root of a fossil tree, the other day, of singularly large dimensions. It measures three feet in diameter, and the four enormous roots sent forth from the lower extremity of the stem are entire for nearly two feet. The fireclay in which it evidently sprung up and flourished is situated beneath three separate stratified rocks, so that in trying to grasp in comprehension the vast period of time which must have elapsed since it shed its foliage upon the unpeopled earth, we feel the effort so much beyond human computation that the period embraced in the written records of our race must, in comparison, appear but as a drop of the great ocean. The freestone rock immediately above the fireclay is for several yards, all around the spot where this magnificent fossil was found, thickly studded with the impression of its leaves and branches, and from the regularity of the indentations marking the outer bark, we suspect it belongs to that species of plant called by geologists Sygilaria. It is creditable to the taste and judgment of Mr William Henderson that he caused this geological curiosity to be lifted with care to a place of safety, where he will no doubt be kind enough to show it the curious and scientific.

14/02/1856 – Fifeshire Journal – Hurricane. On the evening of Wednesday, last we were visited with a hurricane, the like of which has not been in remembrance of the oldest inhabitant which at times was really frightful, sweeping everything before it. The damage in Kirkcaldy and vicinity is great … Grange Tilework destroyed …

24/03/1859 – Fife Herald – Ancient Weapons – Mr Mark Aiton, the clerk of the Grange Brick and Tile Work, has his possession few relics of the “bronze age,” discovered very lately while the labourers at the works were engaged in some preliminary operations on a bank of clay The relics found, consist of a bronze spearhead with blade twelve inches long and another with a blade fifteen inches long. Four or more small blades were got at the same time and are conjectured to be those of short daggers. The heads are different in shape, and though unfortunately the sockets for the shafts are broken, the preserved pieces show the form of the weapons. One of the spears has attached to it some hairs, but an investigation has not yet decided whether these formerly belonged to a human being or not. Professing no antiquarian tendencies, we will not indulge in conjectures on the subject, but leave it to the modern Oldhucks and Doctors Dry-as-dust of the locality to throw light on the meanwhile doubtful cause of their deposit in that spot.

Below – 1894 – Grange Farm, Kirkcaldy. The round kiln like structure has been replaced by a square-shaped structure and the boot-shaped clay pit now appears full of water. 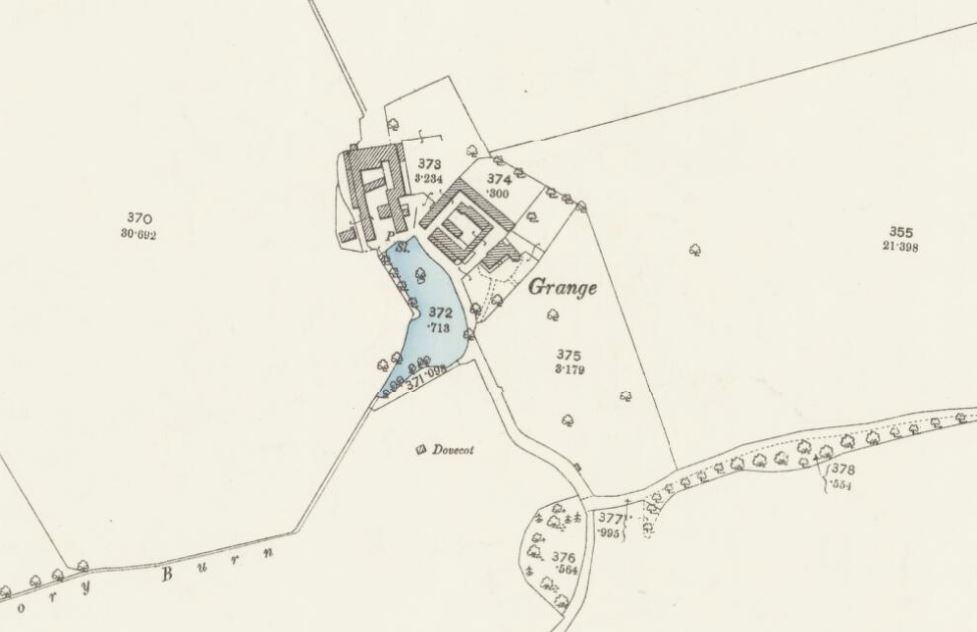 01/11/1952 – Fife Free Press – The Auld Mill Lum – Among the hundreds of bricks that have been taken off the chimney stalk during its partial demolition very few bear any marks of origin. One that was exceptional bearing the inscription Grange Brick and Tile Works, near Kirkcaldy,” has set local antiquarians scratching their heads as the location of such a brickworks which has so far eluded them. The mill lum is nearly 100 years old, 95 to be exact as it was completed in 1858, and no one so far encountered or can recall even stories of a local brickworks, although guesses that it may have been in operation at Seafield are possibly near the mark.

08/11/1952 – Fife Free Press – Mill Lum bricks. The reference in last week’s Notes to the whereabouts of the extinct brickworks from which material for the construction of the chimney was supplied, elicited the following interesting letter from Mr Robert Howie, Grange Farm; I have always understood that such a works did exist and that the site of the clay bed is in the field to the north of Seafield Tower. About 200 yards from the road between the railway and the Tower there is a bowl-shaped hollow in the prehistoric ‘fifty-foot beach level’ and on occasions when I have required impervious material I have dug out strong blue clay around the rim of this bowl. At some time either after clay extraction ceased or during its operation, a very deep drainage conduit was constructed to take water off the depression to the sea. I do not know where the kilns were sited but the railway siding (again this is but my understanding) was immediately north of the bridge. There still exists at this point, on the east side of the railway a strongly constructed loading bank built of stone. A brickworks has certainly not functioned within the past sixty years at least, and I should imagine it would be working around the time the Mill Lum was built. Its duration would be short, for the bed is not extensive, and could not be expected to be large in our steep whinstone parish”. Mr Howie also mentions the existence of lime-stone quarry just north of the old cave. The kilns being still observable. Finally he continues, “there is another item of interest in this vicinity. A spring flows out the beach just south of Seafield Tower. Throughout its course from some unknown source nearer Grange Farm, it is wholly enclosed in a deep well-constructed conduit. Recently I located the underground stream with the aid of a dowser and installed a water ram. I have inferred from its depth and careful construction that a garrison in the Tower would rely on this spring as its sole water supply and that it had to be thus securely concealed so that a siege could be withstood. 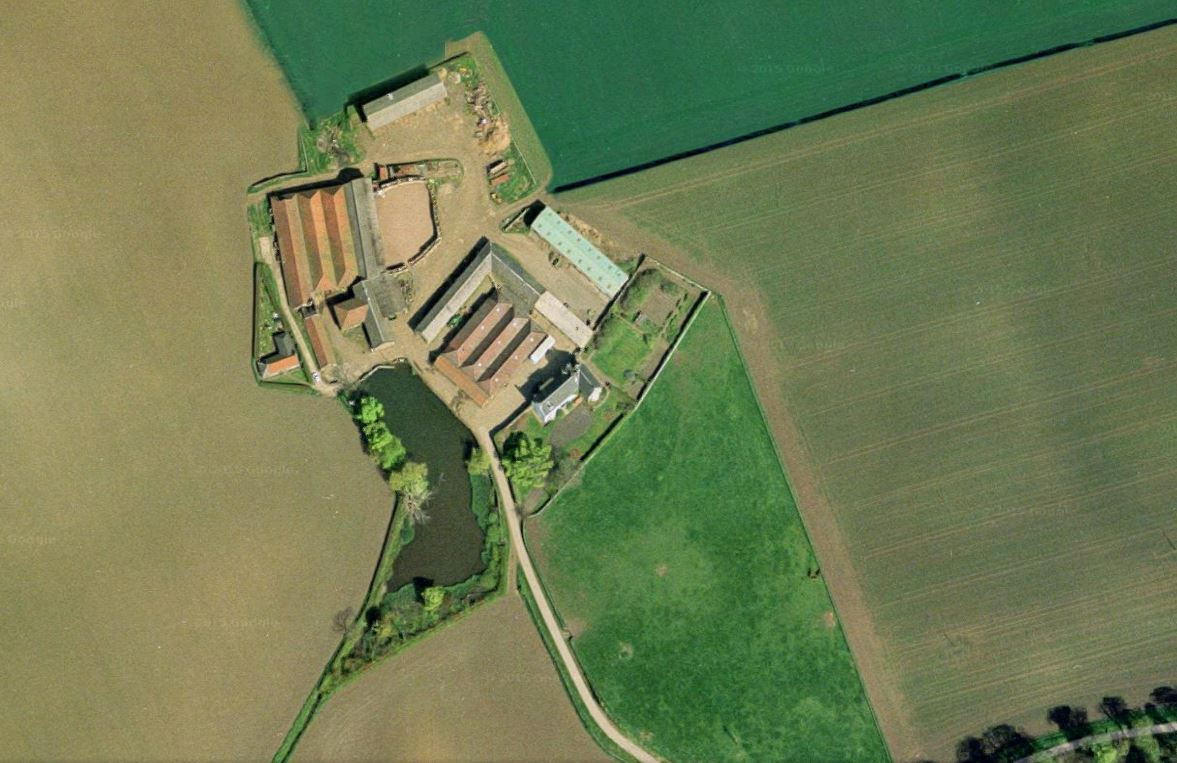 Below – Example of 2 bricks believed to originate from Grange Farm brickworks. 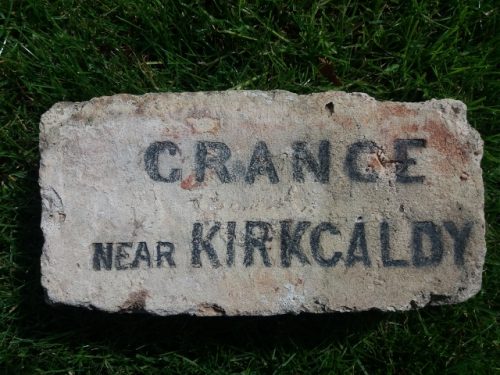 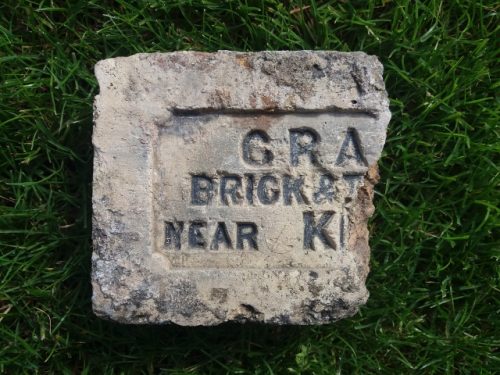