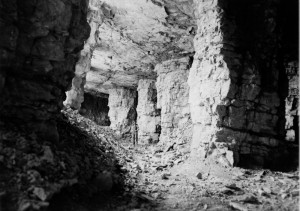 Fire Clay was mined in the same manner as coal – In this section, we will look at Fire Clay mining as it was carried out in the Glen Cryan Mine at Palacerigg in Cumbernauld. We will also look at how the fire clay was processed and items manufactured. The methods used here were fairly uniform throughout Scotland.

What is Fire-clay?
Despite its name, fire-clay is a hard rock and has to be mined at depth by blasting and drilling like coal. Indeed fire-clay seams are associated with the geological Coal Measures. Bricks made from fire-clay can withstand temperatures of 1500 0 C without changing shape and without cracking as they cool.
Fire-clay is thus essential for firebricks for industrial furnaces, and for strong glazed pipes, pots and tiles.
Legend has it that the Romans fired their tiles and pots from the fire-clay in this area. Glencryan in Gaelic means “Little Clayey Glen”. It was not until the early 19th century that surveys determined great beds of fire-clay of a particularly high quality between Glenboig in the west and Linlithgow in the east.
This clay became the basis of a thriving export industry in the Scottish Lowlands and an important part of the Industrial Revolution.

Fire-clay was mined by the “stoup and room” method. The “Stoup” was a wide pillar of fire-clay left in place to support the roof while the “room” was the chamber left between the pillars, in the intersecting galleries or “roads”, after mineral extraction.  Little timber or pit props are needed to further support: the gallery roofs.

Clay in the Glen Cryan Mine was of two qualities – the Upper (white) clay and the lower darker clay. The upper clay was exhausted first.

Structure of Glen Cryan Mine

Tunnels 12 feet wide forming a grid at about 25 ft centres. Two kinds of rail used in the mine:

(2) Lighter U-shaped sections 6.ft long or shorter for the side terminals where the miners pushed the hutches by hand. These lines ware extended or removed as work proceeded.

The main haulage rope was powered by an old ship’s engine sited down at the brickworks and the failure of this engine contributed to the closure of the mine in about 1958.

Men worked in pairs. Holes were drilled in a rack with a hand borer or “Rickety”. Rock was then blasted down with explosives last thing at night to allow the dust to settle. In the morning fireclay was shovelled into the hutches and pushed along to join the main hutchline. (They-put on a tag to identify the load as being theirs. The hutches ware collected down the mine and hooked on to the haulage rope by a man called a “Bencher” – they were hooked on at precise intervals, this being achieved by each hutch stroking a bell mechanism which would tell the bencher it was time to attach the next one.

Each team of Miners would shift about 10 tons of clay per day – they had a target of about 15 hutches full per day. for which the 2-man team would receive 2/6 in 1939. Just after World War II a miner could earn up to £15 per week which was good at the time.

Just after the war, about 15 men were employed in the mine. One man stood at each turn in the hutchline – to change the direction and hook the haulage rope back over the pulley which was fixed between the lines (i.e. to stop it dragging round the corner).

Miners were not allowed into the mine until it had been checked for safety by the “Fireman”. They operated an unofficial system to stop a surplus of clay building up at the brickworks, i.e. if this happened the Management would lay off all the miners until the surplus had been used up.
Miners had to buy all their own tools, i.e. picks. shovels. lamp carbide, clothing etc. No safety equipment was issued.

Water was pumped from the mine both by a machine powered off the haulage rope and by an old diesel pump (the one that could only be started by lighting a fire under it).  For small pockets of water miners used a small portable device called a “Clock Pump”.

Old side tunnels ware usually blocked up to channel the fresh air to wherever the miners happened to be working.  To aid ventilation a fire could be lit at the bottom of an air shaft, i.e. causing an updraught and drawing fresh air into the workings from another opening.

Hutches loaded with fire-clay rock are trundled up out of the mine and onto the tram-lines leading to the brick and pipe works. Pit ponies were used to haul the hutches along the line from the face before 1884.  At Palacerigg, hutches were hooked onto a continuous moving cable powered by a steam engine situated at the Cumbernauld Works. The hutches were thus pulled through the Glencryan Woods, over the old Forest road, to be tipped out at the works and the empty hutches hooked back onto the returning cable.

At the works, the rough rock was crushed in large mills then passed to a wet mill where it was finely ground into a clay paste. From here, it was taken to the moulders’ benches. The brickmaker would cut off a lump of clay with a wire bow, square the clay in his hand by bumping it on the bench, then lifting it up above his head would throw the clay into the waiting mould. He would then level the clay with his “strike” (a flat-bladed knife) and after stamping the Company’s name on the brick, the assistant or “carrier off” would turn the brick onto the drying floor. From. here the bricks would pass to the drying stove and onto the kilns for firing. A good brickmaker in the 1920s could mould 2500 to 3000 bricks in a 10 hour day. For this, he would receive £2 per week

Other fire-clay products such as pipes or chimneys required special moulds or sets through which the clay could be extruded. Pipes were dipped in salt-glazed solution before drying and firing. At every stage of the process from clay rubbing and moulding to firing, considerable skill. was required to produce the best results. Indeed, it was considered, with some justification for many years, that hand-made firebricks were superior to machine-made. Early on it was recognised by the Glenboig Company that the Palacerigg clay was especially suitable for pipe manufacture and salt-glazed products. The catalogue shows the range of products from Cumbernauld: glazed water pipes, silt traps, sewer bottoms, chimney cans, ridge tiles, wall copings, live-stock troughs and ornamental garden ware.

The huge works at Glenboig produced high-quality retorts and firebricks of every size and shape. Their superiority over other British firebricks was quickly established and the Glenboig firebrick became world-famous as testimonials from Russia, India and South America show. They were even used in the building of the “Queen Mary”, and in Central Asia, a valuable Eastern carpet was given in exchange for 6 Glenboig bricks to build a small gold smelting furnace.