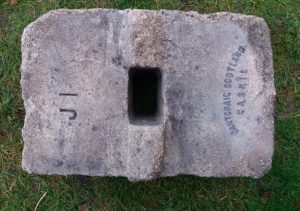 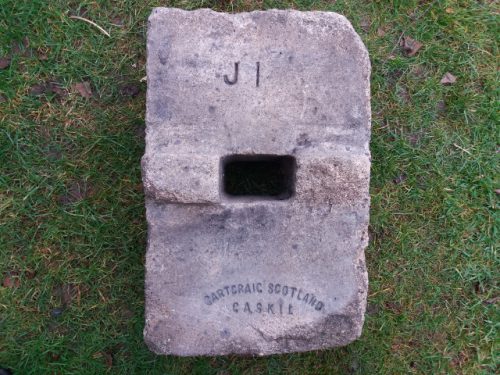 A similar named brick was found in the St John River in northernmost Maine, USA

29/01/2015 – I have had an epiphany regarding the origins or the word caskil or gaskil – I cannot find any  ‘relevant’ location reference to either word nor reference to a surname etc – however examining the letters I now believe the word is Gaskil and I believe this may refer to a ‘shortened’ version of Gas Kiln. This is only a theory and is as yet not backed up or condemned by any known literature! So when did  Gartcraig  / Hurll  start using these gas fired kilns?

Gas fired kilns have great significance to Scotland as they were invented here.

In 1881, James Dunnachie of Glenboig Brickworks, Scotland patented the continuous gas-fired kiln. It consisted of 2 rows of 5 or 6 chambers with transverse barrel arches interconnected with flues. A gas generator at one end of the chambers fed the gas down a central duct and into each chamber in turn. Combustion air heated by the cooling chambers was mixed with the producer gas to give a clean burning oxidising atmosphere, before being exhausted between the green bricks ahead in the flue. Each chamber was more of a unit than in the Hoffman or Belgian kiln, perhaps giving better temperature control during the burning schedule, but the main advantage was the use of gas which gave a more oxidising atmosphere and more uniform heating. This design was sold to Harbison – Walker of the USA and to many other companies.

and further – A noted American scientist in the 1880s, Professor Egleston described the Glenboig Works under James Dunnachie as not only the largest manufactory of fire-clay goods in the world but the model fire-clay work.  Dunnachie’s invention of a gas kiln for firing bricks was to earn him even greater praise and money. The gas kilns first proved themselves at the Company’s works at Glenboig, Cumbernauld and Gartcosh, as they allowed greatly increased temperatures and considerable savings in fuel costs.

04/02/2015 – Update – from the clarity of the brickmark on the brick below, I am convinced the brick reads Gaskil as opposed to Caskil