Below – 13/05/1841 – Perthshire Advertiser – Brick and tyles – Ferry Field, Mouth of Earn. James Baird having made important improvements on his brick and tyle work, and engaged first-rate workmen from Portobello can now offer to his customers the best hand-made tile ever manufactured in this quarter of the country. Those favouring him with orders can be supplied on the shortest notice and at very advantageous terms. As water carriage is cheapest, but often difficult obtain, J. B. has always in readiness a number of boats for conveyance to any attainable place on the Tay or Earn. 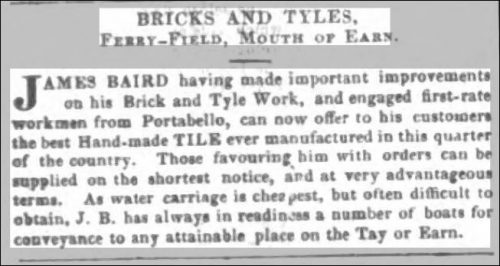 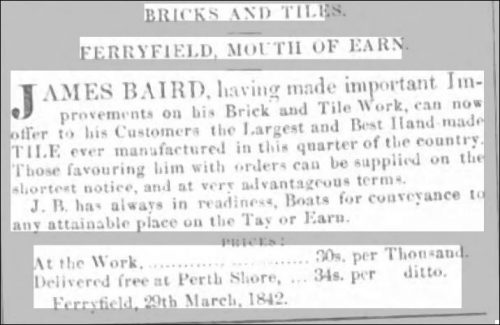 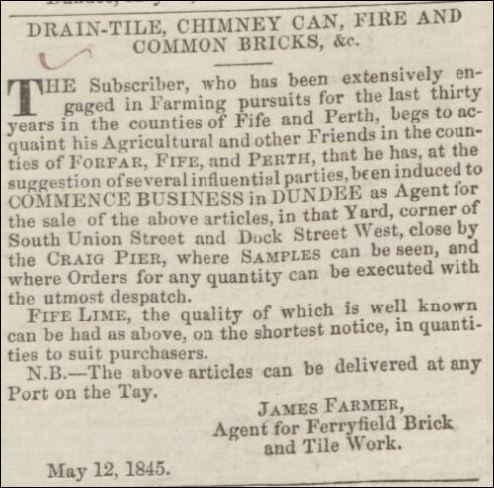 03/06/1845 – The Fife Herald –  Public enquiry to establish the merits of the Edinburgh and Northern Railway and the projected joining of Perth and Edinburgh with a branch to Cupar in Fife. Various businessmen are interviewed and give evidence as to current transport hardships and why the new line would assist them greatly.

James Baird, farmer and tile maker near Newburgh makes 700,000 bricks and tiles a year. He has a great abundance of clay but incurs great expense in carting coal from Lochgelly and Orr’s Bridge. He uses 480 tons of coal a year. Sometimes he cannot get coal in the neighbourhood conveniently. When he gets coal via sea he finds this very expensive. The price of cartage and toll from Lochgelly is 9s or 10s per ton; from little Dysart it is 13s. He has had coals from Lord Moray’s but they were inferior. The coals of Balgonie, which he could have by the proposed railway suit him well. In point of fact, the price of coal at present interferes seriously with Mr Baird’s business. He could manufacture 3 times as much with easier carriage of coals. He could send goods by the river to Perth (a distance of 6 1/2 miles) but he finds this a tedious, troublesome and inefficient method, for various reasons. To cart his bricks to Perth would cost more than they are worth. The railway proposed would be about the same distance to Perth from Newburgh as it is by the river. No other line would advantage him more than the one now under consideration.

Below – 21/10/1847 – Perthshire Advertiser – James Baird. Ferryfield Inn, outhouses, harbour and tile works upon the estate of Carpow to let. 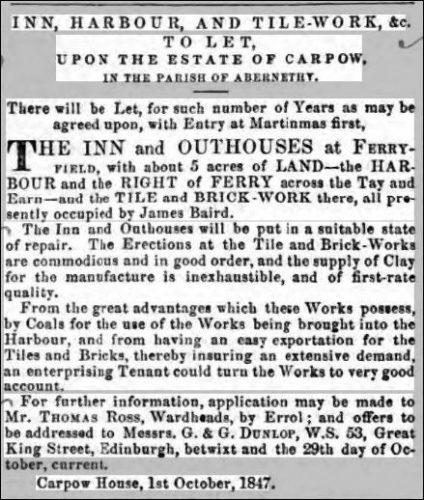 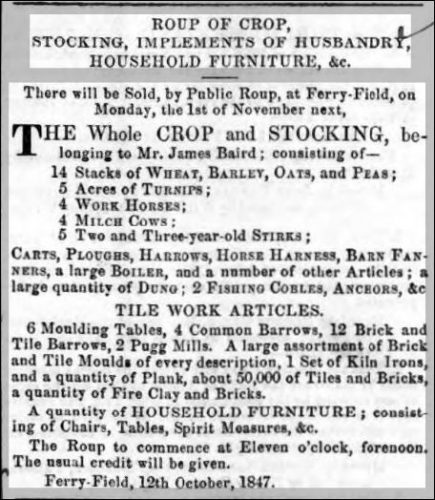 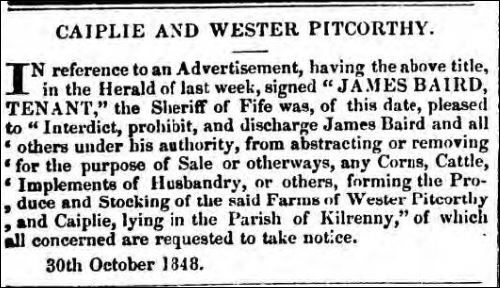 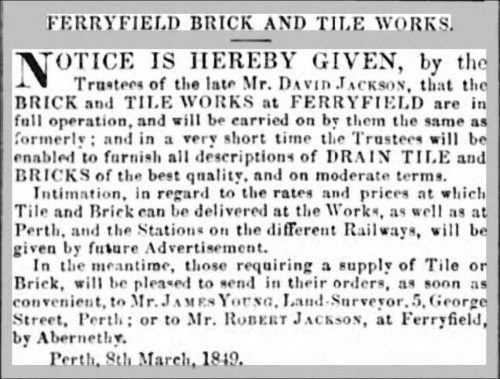 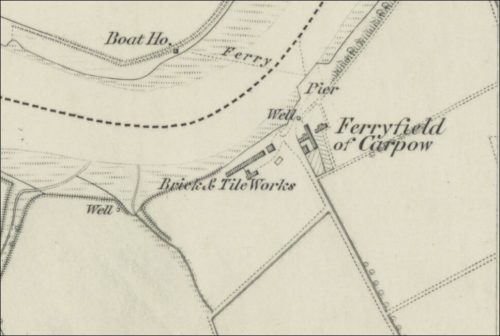 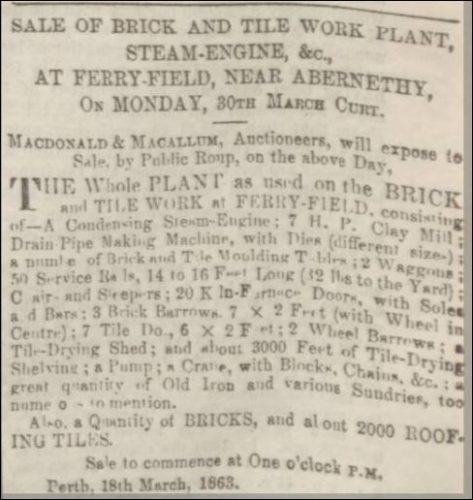 31/03/1865 – Elgin Courier – The Aberdeen Waterworks Contract. The Commissioners of Police and Mr Gibb, the contractor for the new waterworks now in course of execution, and which the city of Aberdeen is to be supplied on the gravitation principle, have had a series of disputes since the works commenced. These have referred, in a considerable measure, to the question of the arbitership. The Commissioners appointed Mr W. Leslie, C.E., to that office, but discovered that Mr Leslie is a contractor on a railway where Mr Gibb, the factor of the contract for the waterworks, is arbiter. It is also stated that Mr Leslie was when appointed arbiter, a partner of Ferry Brick Work, which supplied bricks to the works. The Commissioners now refuse to recognise Mr Leslie as arbiter, and they will go to the Court of Session to seek to have his appointment reduced. (Note – SBH – I am unable to identify the Ferry Brickworks – perhaps this refers to the Ferryfield Brickworks?)

The following information is likely to be relevant to the Ferryfield Brick and Tile Works. Ian Suddaby states:-

Abernethy, Fife. A field drain has a horseshoe drain in the base with an upper fill of broken horseshoe drain wasters and a few brick wasters. It’s very unusual indeed to find anything like this.
Once cleaned and laid out on the grass, there are lots of bits of horseshoe drain pieces, all possibly the same size, 3½” high and three bricks. Only one of the bricks can be measured, 9″ long, 4½” wide and 2½” thick, pretty standard sizes. One of the other bricks has curved impressions showing the bricks and the drains were fired together. There was no sign of small drains being fired inside larger drains to save space. Lots of use was made of sand to stop items from sticking together, even the inner sides of the drains were coated with it. Occasional lumps of coal were seen too.
It must have been a very bad and expensive day when this firing went wrong and the stack of drains and brick collapsed inside the kiln.
So, these were probably made at Ferryfield Brick & Tile Works on the Carpow Estate, less than a mile from where they were found. The works were started before 1841 and probably closed in 1863. 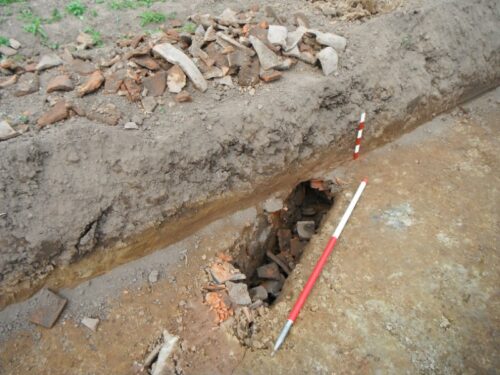 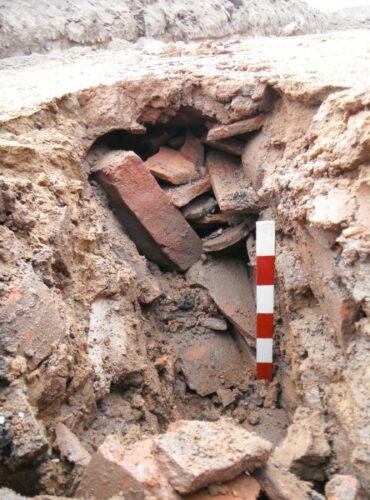 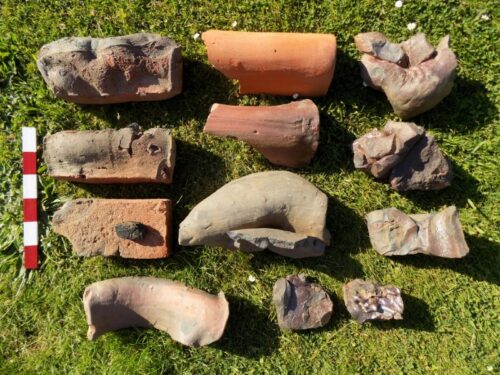 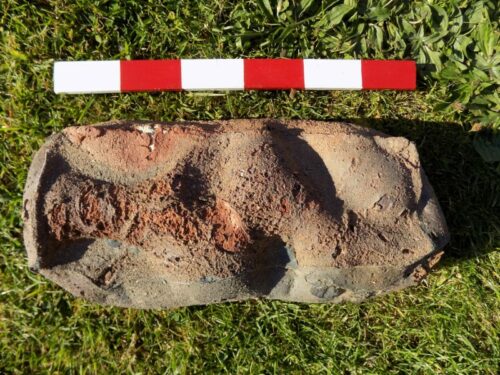