22/04/1865 – Dumfries Standard – Dockfoot Tileworks, Dumfries. Fatal accident. Fatal accident at a tilework. An accident of a most painful description happened at the Dockfoot Tileworks, Dumfries, the property of Mr Scott of Castledykes, on Tuesday afternoon. Connected with the works there is a clay mill driven by a steam engine. The mill is situated in a portion of the fixed buildings and is close to the wall, while outside of it is a fly-wheel with a tooth and pinion wheel about 21/2 feet in diameter attached. It works in a smaller tooth and pinion wheel fixed upon a shaft which drives the day mill. The wheels are each about four inches broad and revolve at a very rapid rate. The principle part of the duty of William Hamilton, engine keeper, was to attend to this machinery and oil it when necessary; and whether he was engaged doing so on Tuesday is not known, but he was caught between tooth-and-pinion wheels alluded to, and crushed to death. How the accident occurred it is impossible to tell.  John McFadzean, foreman of the tileworks, was working at a brick machine near the mill house, and within a couple of yards of the place where he saw Hamilton standing. The latter was then leaning over the drifting shaft of the clay mill, with his face towards the foreman. About half a minute after seeing him in this position, McFazdean looked up and saw Hamilton’s head projected from between the tooth and pinion wheels on one side, and his body on the other. He instantly ran and threw the engine out of gearing, but before the machinery could be stopped the unfortunate man’s body, and his chest and limbs were dreadfully crushed and mangled. Death, of course, was instantaneous. The deceased was about twenty-five years of age and unmarried.

Below – 1893 – This is the area the Dockfoot Tileworks would have been located in. 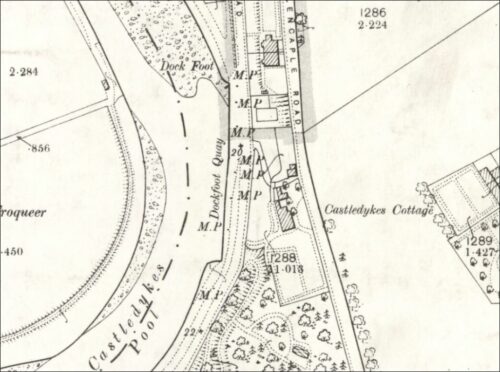