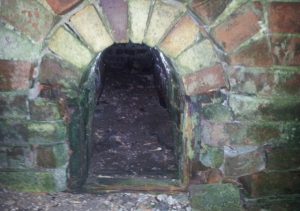 Carsethorn Brick and Tile Works, Kirkbean, Kirkcudbrightshire aka Drum Tileworks. (Note – SBH – I believe these may be one of the same works).

Brickworks House, Tileworks – The brick and tileworks were built by the Oswald family, of Cavens; probably on behalf of George Oswald in the early 19th century, or possibly in the late 18th century for his uncle, Richard.  The first reference to them is in 1824 (A.Truckell, Dumfries Museum). They are not mentioned in the OSA of 1791 but are in the NSA of 1845.  Clearly shown on the first edition Ordnance Survey map of 1854 is a complex comprising of a long pit of some 75m, aligned west-east and noted as a tile pit.  Parallel to this is a long shed, almost certainly a drying shed.  The brick kiln is shown between the eastern end of the tile pit and the shed to the south.  A ‘Brick Field’ is shown extending southwards from the eastern end of the drying shed down to the Nimbly Burn.  At the north-eastern end of the drying shade is a circular feature noted as ‘Machine’.  Given its location adjacent to a track leading to a quayside on the burn it may well be a  weighing machine or hoist/crane.  To the south-west of the works, on the southern side of the burn, is a dam with a lade that appears to cross over the burn and feed a channel running parallel to and just south of the drying shed, and extending as far as the brickfield.  A clay pit is shown some 70m to the east of the buildings, on the north side of the burn.  By the time the second edition map, around 1896, only the brick and kiln and a small structure to the north-east of it are still shown.  RCAHMS photographed the interior and exterior of the kiln in October 1982, as part of the Scottish Industrial Archaeology Survey.  Information from DGC (AJN) 17 August 2011.  One of the products of the works was tile pipes for land drainage, one of which is in Dumfries Museum (Acc.No. DUMFM:1955.85) Information from DGC (J.Turner) 25 June 2013.

Below – 18/07/1855 – Dumfries and Galloway Standard – Cannabony Farm on the Estate of Arbigland, Kirkbean to let with a tilework nearby at Carsethorn. 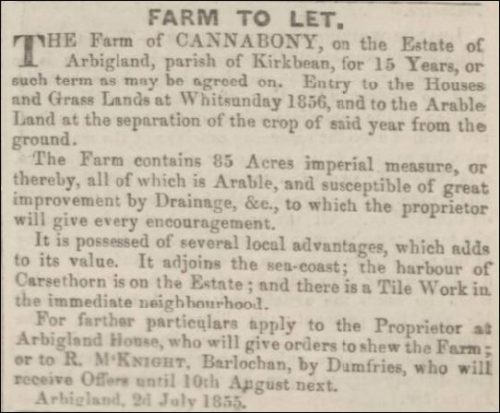 Below – 18/07/1855 – Dumfries and Galloway Standard – Nith commissioners. Survey of the river … The Commissioners were conducted over the ground by McCraken, Drum, factor for Mr Oswald, and by McKnight of Barlochan, factor for Colonel Balfour of Arbigland. In order to cross the pow, the party had to make a detour by the Drum Tileworks where they paused a few minutes to observe the tile machines in operation. In consequence of the substitution of brass for a cast-iron mould, the pipes are manufactured with a smoothness nearly equal to earthenware …

Below – 1893 – Carsethorn Brick and Tile Works – appears to be disused. 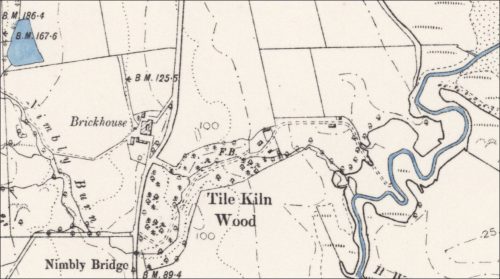 Below – 2 unmarked bricks found lying around the kiln and assumed to have been manufactured there. They both appear of different composition and quality and may represent  an earlier and later product of the works (if manufactured there) 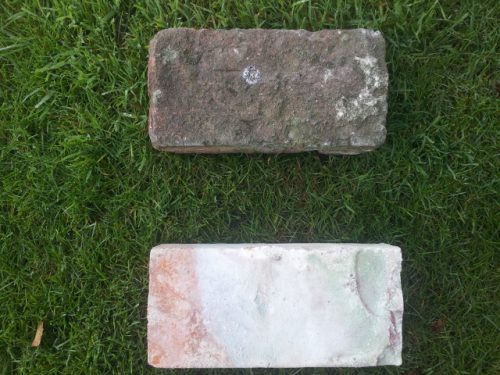 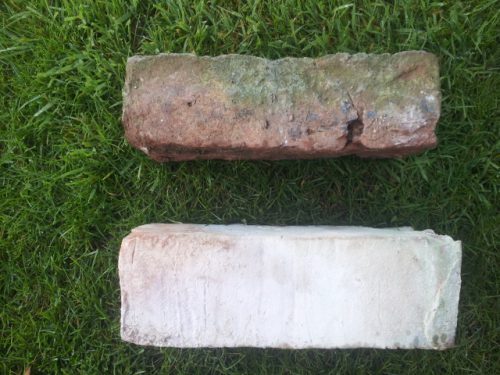 Below – A brick, a half brick, floor tile and a drainage tile donated by John McMyn. They were found on-site and believed to have been manufactured there. 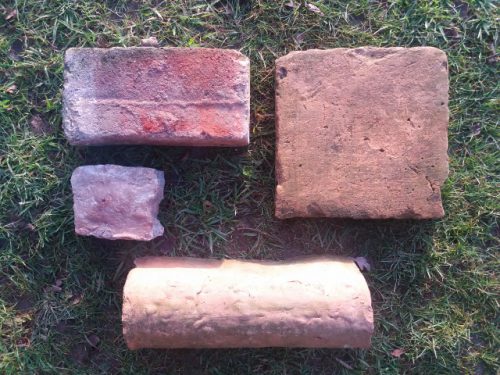 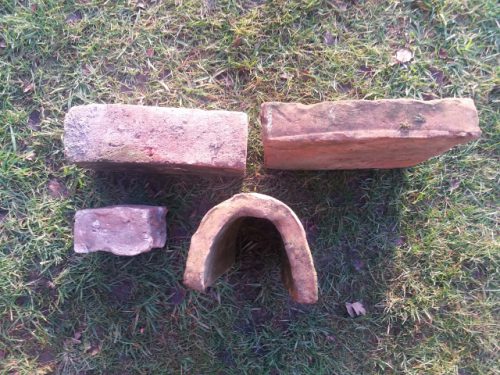 Below  – The only marked brick found around the site was stamped ‘R. Hinde’. These appear to have been used as fire bricks and may have formed the fireboxes. 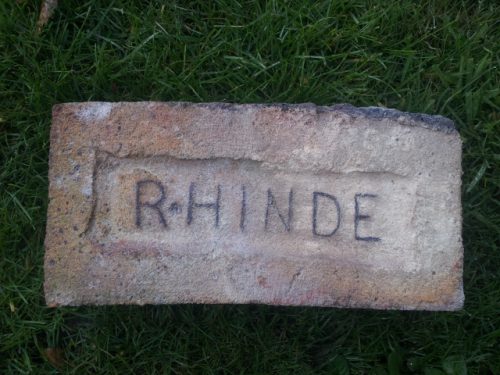 Below – Diagram of the kiln as sketched in the RCAHMS  booklet entitled ‘Brick, Tile and Fireclay Industries in Scotland’ 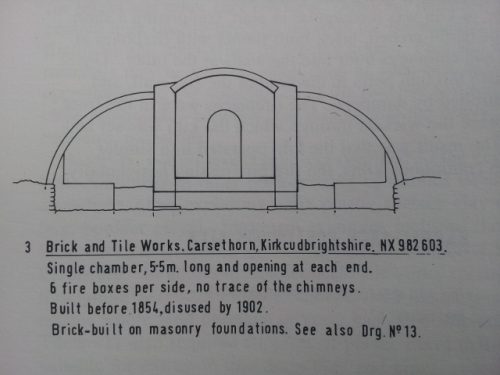 Below – Some photos taken of the site on 20/07/2016 – It was thunder and lightning and very overcast and overgrown so the photos of the outside of the kiln were too dark to show here – a return journey is required. 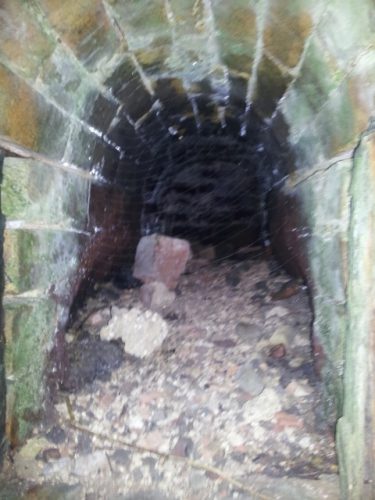 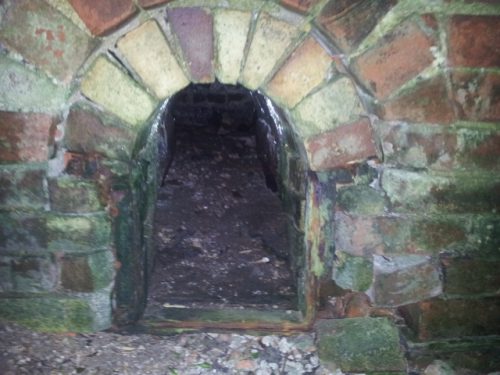 Below – The Entrance to the kiln and a photo showing the internal brickwork. 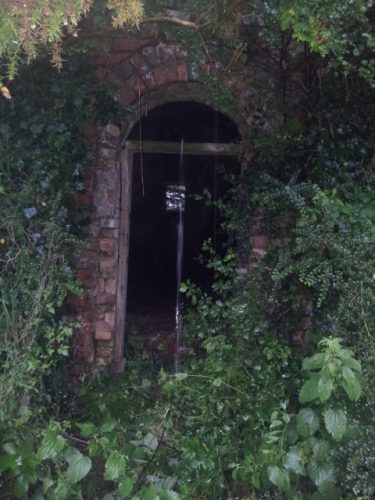 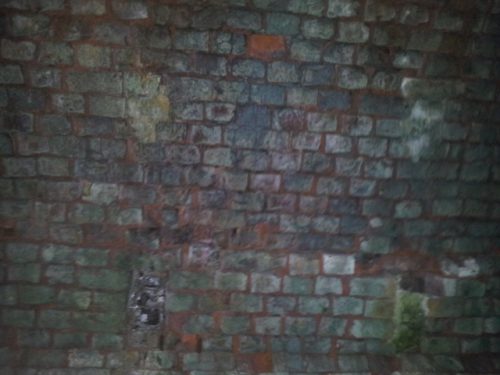 Below – The overgrown claypits – note the banks at the rear of the photos. 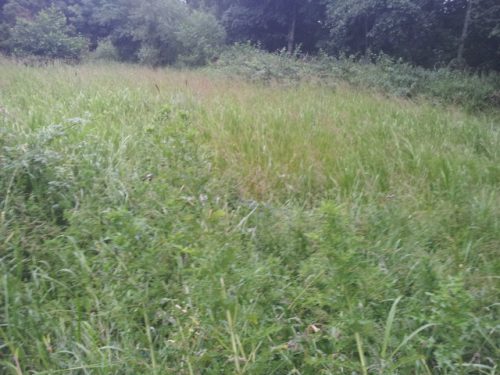 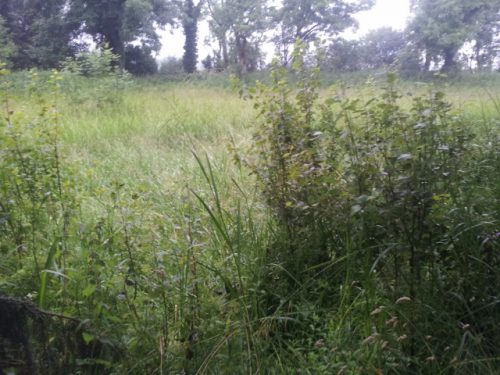 Below – 2 x brick sheds in the garden adjacent to the works and they must surely be made from bricks manufactured on-site. 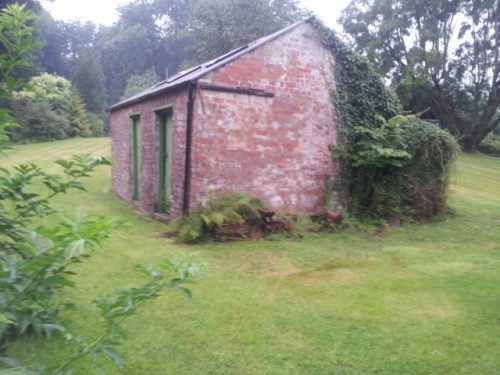 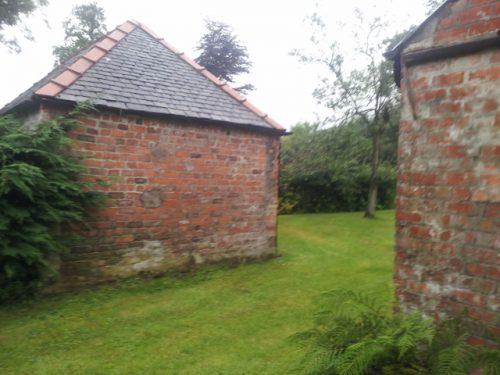