Canmore – Carsehead Brickworks, Beith Road, Dalry, North Ayrshire. Ayrshire Brick & Fireclay Company established Carsehead Brickworks in 1907 and operated the business until at least 1928. The works had several owners from then with the Scottish Brick Corporation becoming the last owner in 1969. The works closed in 1977 and were mainly demolished c.1981 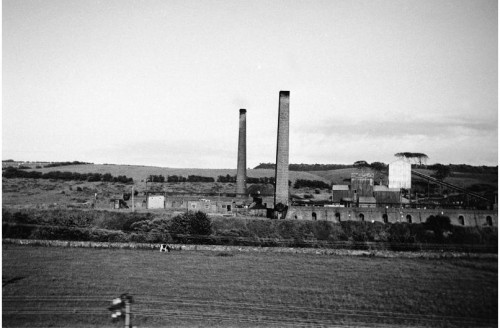 Ayrshire Brick & Fireclay Company Ltd, Carsehead – The brickworks lay on the outskirts of Dalry and was started about 1838 when the Blair Ironworks was built nearby.  Blair did not flourish and in 1856 passed into the hands of the Eglinton Iron company, which had just been bought by William Baird & Co.  Hunt’s Mineral Statistics of 1858 record the brickworks producing 2,700 tons a year of taphole clay for blast-furnaces.  Firebricks were also made.  The fireclay came from Blair Colliery, and later from No. 5 and No. 7 Pits to the south, which were connected to the brickworks with a mineral railway.  The ironworks closed in 1870, and the brickworks passed into the hands of Arthur Logan, Coalmaster, of Ellieston, Paisley.  Logan incorporated the company in 1901, with a capital of £4,000, which was almost all held by James Coats, the thread manufacturer of Paisley.  The company was managed by Logan but it did not prosper, and in 1915, Logan took over the Coats shareholding.  Losses continued and brick making stopped in 1924, but the Company was not liquidated until 1945.  Source –  The Scottish Refractory Industry 1830 – 1890 Kenneth W Sanderson. (Note – SBH – Apart from this entry I am unable to find any supporting evidence that the brickworks operated prior to 1898. If anyone has such information then please get in touch).

24/08/1898 – Kirkintilloch Herald – We notice that Messrs D Logan & Son, Limited of Glasgow and London, have completed arrangements with Messrs William Baird & Co., Limited, for the utilisation of the large bing known as Carsehead No. 2, situated about yards east of Dalry Station, for the purpose of commencing the making of brick from pit refuse. The firm have already begun to put down the plant, and as soon as the necessary ovens are erected brickmaking will be commenced. If this industry means the gradual vanishing of the unsightly bings, this firm, or a similar one, would have a cordial welcome in the vicinity Kirkintilloch.

21/08/1903 – Ardrossan and Saltcoats Herald – JP Court  Joseph Harper and Wm. McMaster both labourers for contravention of the Trespass Act lodging in the brick-kiln situated at Dalry Brickworks, occupied by the Ayrshire Brick and Fire Clay Company, were each fined in the modified penalty of 5s or 3 days. 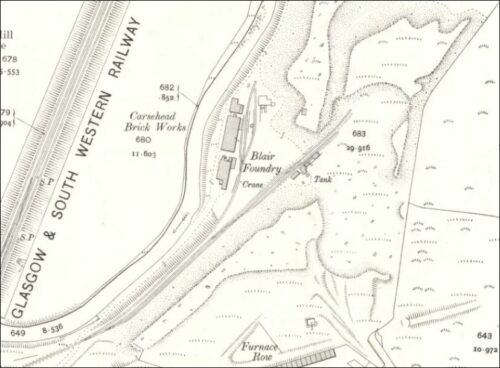 12/01/1911 – The Scotsman – The Ayrshire Brick and Fireclay Company, Dalry have become proprietors of Highfield Pit. New pithead and screening arrangements are being erected and it is expected that the work will be in full swing in the course of another week or so. It is the company’s intention, it is understood, to manufacture lime for building and agricultural purposes and thus supply a want in the district.

07/01/1921 – Bellshill Speaker – Scottish housing. Brickworks for Glasgow. The Director of Housing for Glasgow has been instructed to report as to brickworks in the neighbourhood of the city which might be acquired. Messrs Harland and Wolff (Limited), having agreed to carry out certain proposed buildings with other than brick have offered their stock of bricks, amounting to 120,000 to the Corporation of Glasgow at 110s per thousand. The Corporation Housing Committee have accepted the offer. The minutes of the Glasgow Corporation Sub-Committee on Building Materials states that the brickworks at Dalry which the committee offer to purchase are those of Mr Arthur Logan at Kersland and Carsehead. It is proposed to acquire both works for £45,000. Mr Logan was induced to reduce his price from £60,000. A tender by Messrs P. and R. Fleming, amounting to £1328 15s, for the erection of the necessary sheds in connection with the proposed concrete brickmaking, has been recommended for acceptance by Glasgow Corporation.

18/01/1921 – Aberdeen Press ad Journal – The Scottish Board of Health have approved of the purchase by Glasgow Corporation of the brickworks at Dalry, Ayrshire, which the Corporation provisionally agreed to buy for £45,000. The brickworks are situated at Kersland and Carsehead, and they are each capable of producing 11,000 bricks per day, which works out at, something like 5,000,000 bricks annually. As something like 20,000 bricks are used in the construction of the average house under the Corporation schemes, the production from the newly-acquired brickworks will enable about 250 houses to be erected annually. A gratifying feature of the purchase is that Dalry bricks will be immediately available. During tile Town Council discussion with regard to the purchase, Baillie Wheatley mentioned that the bricks could be delivered in Glasgow on the day following the completion of the purchase. The Scottish Board of Health’s approval of the purchase was made yesterday afternoon at a meeting of’ the Sub- Committee Building Materials, by Mr Mae- Intyre, the clerk. 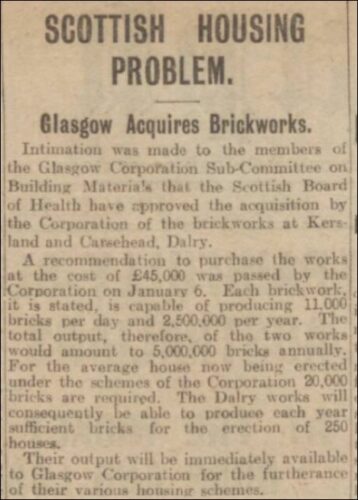 Below – 05/02/1925 – The Scotsman – Glasgow Corporation considers selling its Dalry Brickworks. (Note – SBH – I am not 100% certain which of the Dalry Brickworks this article refers to) 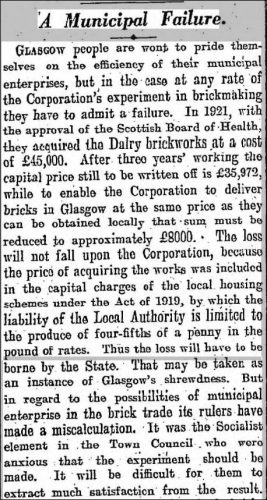 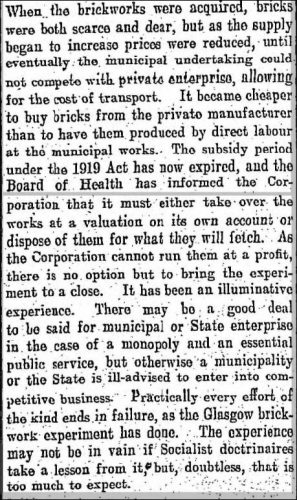 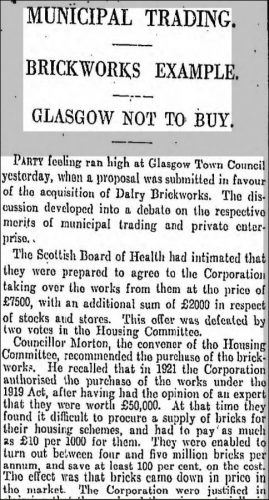 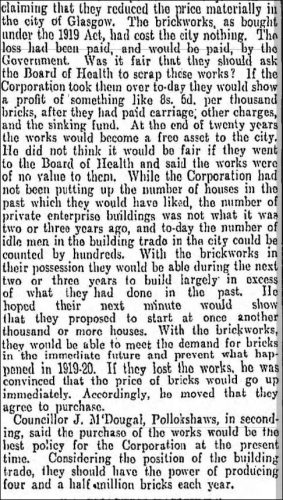 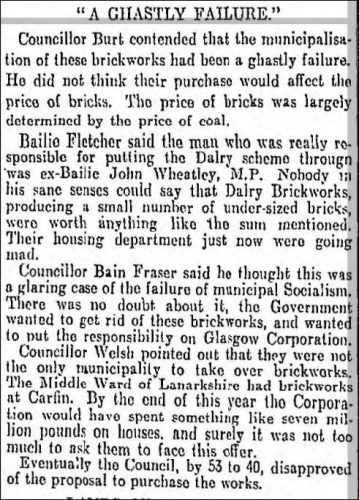 07/09/1929 – The Scotsman – New Company – Dalry Brick Co Ltd, Carsehead, Dalry, Ayrshire. Private company to carry on the business of manufacturers and dealers in bricks, tiles and pottery. Capital £6000 in £1 shares. 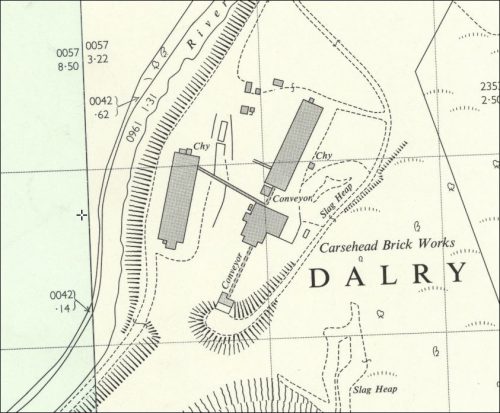 1960s – 1969 – The 1985 publication ‘A survey of Scottish brickmarks’ suggests that the Alexandra Transport Co were the owners.

1969 – 1977 – The 1985 publication ‘A survey of Scottish brickmarks’ suggests that the Scottish Brick Corporation were the owners.

1981 – The 1985 publication ‘A survey of Scottish brickmarks’ suggests that the works were demolished by late 1981. 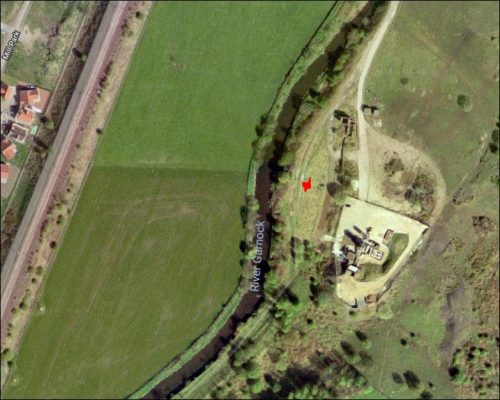