02/05/1873 – Glasgow Herald – Serious accident in clay pit – Yesterday afternoon a, young lad named John Burns, residing at 10 Old Sneddon Street, was severely injured by the falling of a large piece of rock from the roof of the clay pit belonging to Speir, Gibb & Young, on the Greenock Road. The lad was employed as a drawer to a miner, with whom he was working underground, and the stone, which weighs about half a ton, fell from a distance of some nine feet, striking Burns on the head, and resting on his body. After some little delay, the stone was removed, and it was found that the lad had sustained a fracture of the skull and that his legs were severely injured. The miner, who was about two feet from his assistant at the time of the accident, escaped unhurt.

03/10/1874 – Paisley Herald – Melancholy and fatal accident –  On Monday afternoon very melancholy accident occurred at the works Messrs Speirs, Gibb, and Co., fire-clay manufacturers, Caledonia Works. Greenock Road. In connection with the works the firm has a fire-clay pit, which is in-depth about 25 fathoms, and at the time referred to the manager of the pit – Mr Robert Newton- was engaged with others in cutting away the sides the underground way for the purpose of widening it, when suddenly a large piece of rock which formed a portion of the roof, and weighed several tons gave way and fell upon Newton and miner named Richard Mayberry. A low wall on the side of the roadway prevented the rock and earth from falling closely upon Newton, but he was severely crushed, and the edge the rock fell upon the legs of Mayberry, fracturing his left thigh. He also received other injuries. A gang of men at once descended the pit, and with the aid of dumb-screws, lifted the rock, and the men were extricated, only, however, after the lapse of about an hour and a half’s time. Newton wished to be conveyed to his residence in Maxwellton Street but died shortly before reaching it. Mayberry was conveyed to the Infirmary, where he is progressing favourably, and it is thought that amputation will not necessary. Dr Macleod was attendance after the accident. Both are married men It is said that Newton was a most careful man, and much respected and trusted by his employers. 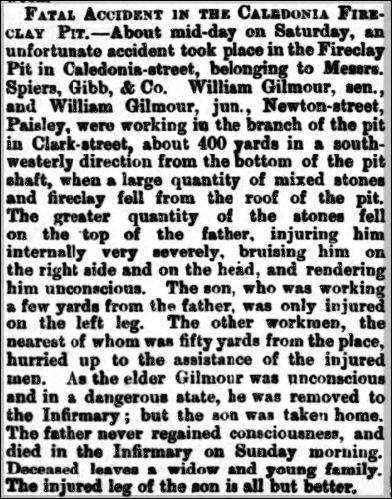 19/03/1892 – Paisley Gazette –  Messrs. Speirs. Gibb, & Co, fireclay manufacturers, obtained the sanction from the Court to erect a ventilating outlet to the pit-shaft at Clark Street, to be built on a piece of vacant ground there. 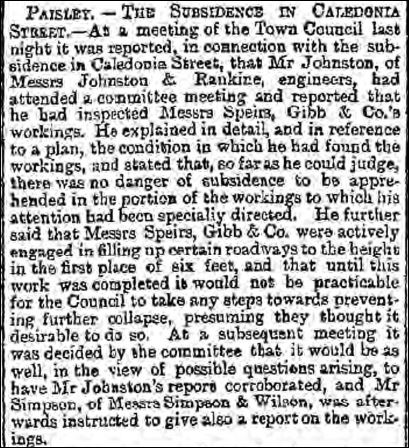 Below – 15/09/1894 – Issues regarding compensation and payments following subsidence problems created by the workings of the clay pit operated by Speirs Gibb and Co which is leased from the Council. 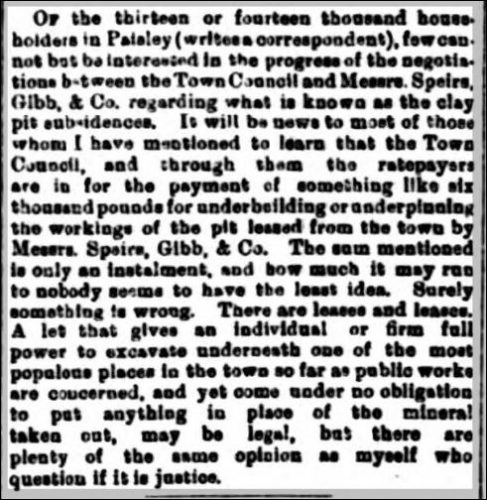 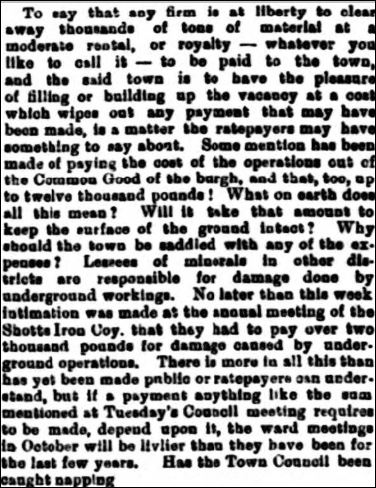 Below – 26/06/1895 – Glasgow Herald – Court action regarding mineral excavation at the Caledonia Fireclay Mine. 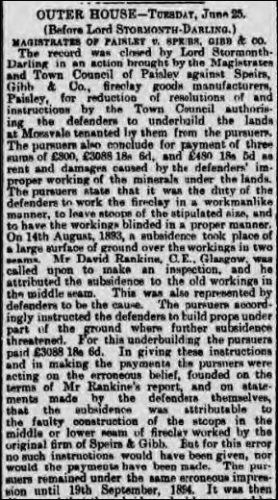 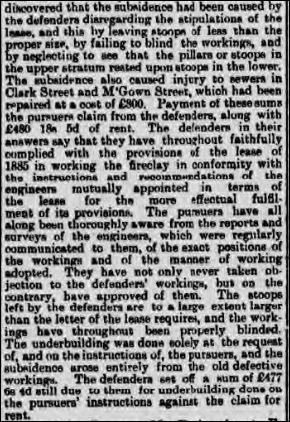 Below – 11/07/1896 – Paisley Gazette  – Court action regarding mineral excavation at the Caledonia Fireclay Mine. 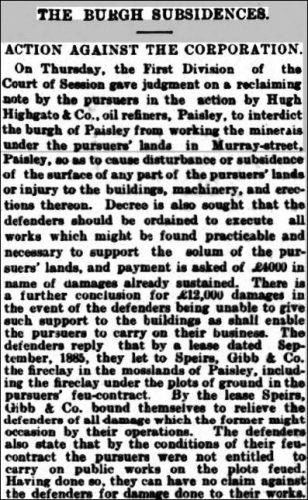 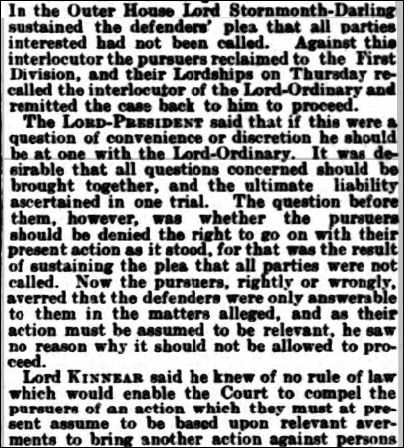 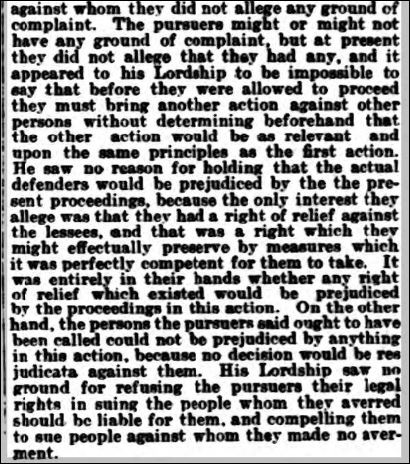 Tagged with: Caledonia Fireclay Works, Clay mine, Speirs and Gibb