1853 – 1855 – ScotlandsPlaces – Ballass Brick and Tile Works. A number of sheds and kilns all in good repair, with a large clay pit attached. the property of Alexander Bogie Esq. Ballass.

Below – 24/02/1853 – Fife Herald – Paternity case. This was an action brought in the instance of Elizabeth Duncan or Methven, residing Cupar, wife of Millar Methven, plasterer there, with the special advice and consent of Millar Methven, and him for his interest, pursuers, against Hugh Dick, brick and tile maker Balass.

On a separate action, Mr Dick is sued by William Mackersay for professional services. See link for the full court disposals. 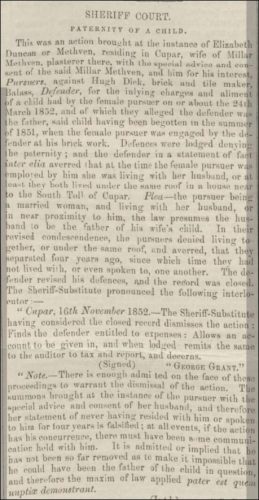 31/03/1853 – Fife Herald – Brick and tile work at Cupar Fife – To be Let for a period of Eleven Years. The going brick and tile work at Balass, within about half-a-mile of the Railway Station at Cupar, as possessed by the late Firm of Adamson & Dick, Brick and Tile Makers, Cupar-Fife.  The Clay is excellent and abundant, and the demand for Brick, as well as for House and Drain Tile, very considerable.  The work is newly and substantially fitted up with Kilns, Shades, and all requisites, and which may be had at a valuation.  There are several Cottages upon the Work for the Operatives. Entry Immediately.

Apply to Mr Charles Welch, Writer, Cupar; Mr Wm. Ramsay, Jun., merchant there or Messrs W. & G. Pagan, Writers in Cupar-Fife, Agents for the trustees of Messrs Adamson & Dick, with whom offers to be lodged on or before the 15th April next. Cupar-Fife, 29th March 1853. Those indebted to the late firm of Adamson & Dick, are requested to make immediate payment to Messrs Pagan.

1858 – Mineral Statistics of the United Kingdom of Great Britain and Ireland for 1858 – A kiln exists at Ballas, Cupar and bricks &c are manufactured there.
Tagged with: Adamson and Dick, Alexander Bogie, Balass, Hugh Dick, Robert Adamson