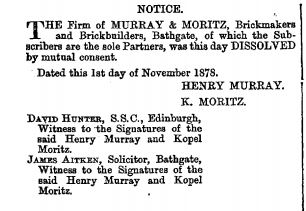 31/07/1889 – Falkirk Herald – Brickwork for sale. The whole plant at Armadale Brickwork and the business so long successfully conducted there, is offered for sale as going concern, owing to the death of the late proprietor, Kopel Moritz. There is still about four years of the lease to run and the landlord would be willing to treat with a suitable tenant for extension of the lease. The current contracts will be continued to a suitable purchaser. All information can be obtained from Mrs Moritz, Melbourne House, Bathgate, or the subscriber, and the works will be shown by Mr Cartmill. The stock of bricks can also be had at a valuation. Offers to be sent to Mrs Moritz. Thomas Dodds, solicitor, Bathgate, Agent. 23/07/1889. 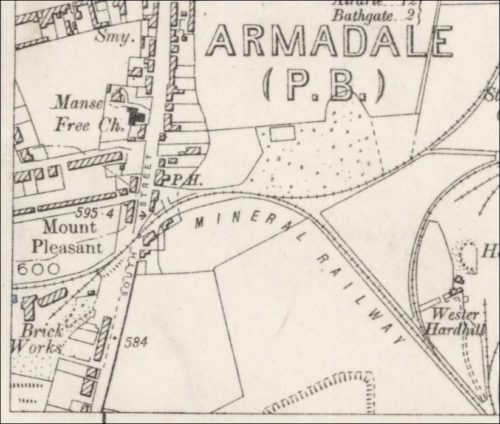 Below – Note the mineral line from the Armadale Colliery runs to and past the brickworks. 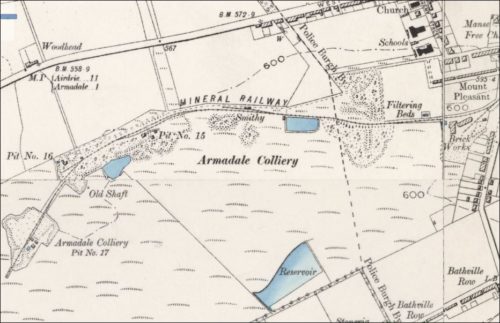 Below – 26/10/1900 – Linlithgowshire Gazette – A history of brickworks in the Bathgate, West Lothian area … The Atlas Brickwork is the older of the two. (Etna and Atlas comparison) It was begun in a small way a good many years ago by Mr Robert Fleming of Coatbridge, who had as a partner Mr Kopel Moritz. The latter subsequently dropped out of the partnership and removed to the Armadale Brickworks. He continued to be associated with those works till his death, after which the works wore acquired by Mr W. D Samuel and Mr Robert Muir, the present managing directors and original partners of Robert Muir and Co., Ltd., who own Armadale, Barbauchlaw and Boghead Brickworks …

03/05/1902 – Linlithgowshire Gazette –  Since the good weather put in an appearance the steeplejacks of Messrs Robb and Sons, Glasgow, have been busily engaged on two chimney stalks in the district, their work attracting the attention of many people watching them working. Tuesday was an ideal clay for the work, and Mr Wm Money, a foreman of the job, mounted the long ladder to assist in finishing the pointing of  Messrs Robert Muir and Co. Armadale Brickworks chimney, having with him Edward Develin, who arrived from Govan on the previous day to take up the work pointing the stalk. It was Develins first day up the chimney, and the work was proceeding satisfactorily, while many watched from below,  the men perched wooden seats, 24 inches by 12 inches, slung from a rope that passed over the chimney. Without the warning, Develin, who was working about 25 feet from the top of the chimney (which is 115 feet high) was seen to fall. A shout went from many throats and a dull thud was heard all over the works as the unfortunate man struck the corrugated iron roof of the engine-house. The slope of the roof was towards the chimney, and Develin, who rebounded off the like a ball, fell towards the chimney striking the right side of his head against it, and falling to the ground. On the other side, the stalk Mr Money was working in a standing position at the very top, and when he felt the jerk of his mate’s fall. He clutched the top to prevent himself from falling, having a remarkably narrow escape. A brick came away from the chimney with the touch his hand. He then threw himself over the top edge of the chimney till he found himself secure, after which he hastened down. Meanwhile, workmen had reached the prostrate body of Develin, whom they carried into the engineer’s shop. It was some minutes before he began to rally, and then he asked what had happened, but he did not seem to realise anything very clearly that was said to him. He constantly complained of his feet and legs being very cold, but could not suffer the weight of the clothes that were put upon them, and hot-water jars were speedily obtained. It was some little time before a doctor could be got, and Dr Kirk was phoned from Bathgate. Dr Anderson’s assistant, Dr Livingstone, was, however, first to arrive, and making a hasty examination, found a wound on the right side of Develin’s head, directly above the ear, from which blood was oozing, around which the hair was missing. Closer observation revealed a slight depression of the skull which was no considered dangerous. The body gave no indication of serious results of the accident until the abdomen was reached, and this was found to be the whole injury, Develin having fallen on the roof of the engine-house in a sitting position complained greatly of severe pain in the groin. Dr Kirk and his assistant soon afterwards appeared after the wound on the head had been dressed by Dr Livingstone An injection of strychnine was administered through the wrist, after which the unfortunate man seemed to get easier. He was conveyed to the Glasgow Royal Infirmary by the Armadale Ambulance. On an inspection being made of the seat which Develin was sitting on it was found that the rope which was about the thickness of a horse halter had broken. Unlike the rest of the seats examined and used for the same purpose, Develin’s rope was of a single piece which passed through the four corner holes and was knotted at the two ends instead of having two rope’s with four knotted ends to guard against one breaking. After falling 90 feet and not to sustain a broken bone is considered nothing short of miraculous, the wonder of it all being that Develin was not dashed to pieces as was the result with the last man who fell off a chimney while working at Etna Brickworks, Armadale, about 9 years ago.

05/10/1906 – Linlithgowshire Gazette –  Robert Muir & Co of Armadale, Barbauchlaw and Boghead Brickworks are about to become mine owners, in so much as they are going to open a clay mine in the vicinity of their Barbauchlaw Brickworks at the East end of the town.

24/05/1907 – Linlithgowshire Gazette – Messrs Robert Muir and Co., Ltd., fireclay brick manufacturers, Armadale, Barbauchlaw, and Boghead Brickworks, gave a complimentary dinner to Mr Robert Boyd and his workmen in the Crown Hotel on Friday evening, on the completion of Mr Boyd’s contract sinking a pit and driving a daylight mine for coal and clay at Barbauchlaw Works. Bailie Samuel, managing director, occupied the chair, and after justice had been done to the excellent viands purveyed Mr Greig, glasses were charged, and a splendid programme of toasts, song, and story enlivened a mirthful and enjoyable!o evening.

06/03/1908 – Linlithgowshire Gazette – Death of brickworks manager – Mr James Crosier, aged 56 years, manager of Messrs Robert Muir and Co’s Armadale Brickworks and residing in the company’s cottage at the works, died suddenly on Thursday morning from the effects of cold, which brought about a complication of troubles, chiefly inflammation the lungs and an affection the kidneys. He had only come to take up his duties as manager of the works in November of last year, coming from Chryston. He was no stranger, however, in Armadale as a brickwork employee, having been employed with Mr Quinton at the Bathville Works for a long time, and leaving the district with Mr Quinton when his lease was out fifteen years ago. He was a powerful looking man of a very pleasing disposition and was just about to see the works, which have been slack for some time, in full operation again. His remains are to be interred at Chryston tomorrow. Much sympathy is felt for his sorrowing widow.

08/01/1909 – Linlithgowshire Gazette –  Our County in 1908 … The foundries and brickworks are not so busy as usual and could do with a great deal more work. Messrs Robert Muir & Co-owners of Armadale, Barbauchlaw and Boghead brickworks having been at law with the United Collieries Company regarding their lease of South Broadrigg Brickworks had their case settled in their favour in the House of Lords early in the year and resumed operations at the works on the 4th July.

24/09/1909 – Linlithgowshire Gazette – New Management at Muirs Brickworks –  Hugh Goldie, who has managed the brickworks and coalmine of Messrs Robert Muir and Ltd., for past three years, having accepted an engagement of similar nature Bonnybridge, left on Wednesday of last week. In order to fill the vacant position. Messrs Muir and  Co., who own Armadale. Barbauchlaw, and Boghead Brick and Pipe Works, and Coal Mine have had to engage a  manager for the brick and pipe works, and also a manager for the mine. Mr James Gillespie,  late of Turner and Co., Portobello, took up the duties of managing the brick and pipework on Tuesday, and Mr Heaps, from Blackbraes, a young certificated mine manager, has taken over the management the mine.

Below – 10/12/1909 – Linlithgowshire Gazette – Barbauchlaw Brickwork modifying a road crossing following an injury to a horse. Armadale Brick Works – also owing to the weather which prevents building and a build-up of stock of their ‘red brick’ the manufacture of more brick has been suspended meantime. All hands are redeployed at Muirs Boghead and Barbauchlaw Works. 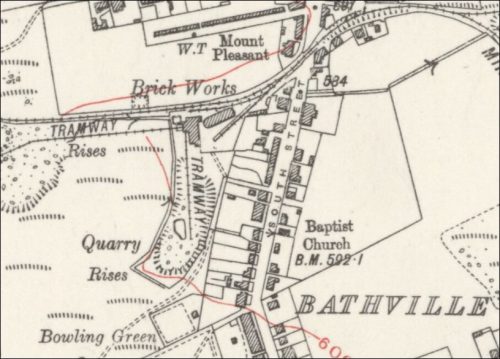 30/04/1915 – Linlithgowshire Gazette – Armadale – An old Armadale boy killed – Mr Robert Muir, late managing director of the firm Messrs Robert Muir and Co., Ltd. Armadale, Barbauchlaw, South Broadrigg, and Boghead Brickworks, now residing at Carfin, has just received word from the War Office that his son Robert, who was serving with the Guards, has been killed action. The young soldier received his schooling at Armadale, where he made a large number of friends, with whom he continued in the closest intimacy, and was engaged to be married to Miss Grace Shaw. With the deceased’s parents and family and Miss Shaw, the deepest sympathy is felt.

20/05/1921 – Linlithgowshire Gazette – Patrick Casey, the 5-year-old son of Mr Patrick Casey, Bathville Row on Saturday was along with other little boys enjoying himself in the clay hole as Messrs Muirs Armadale Brickworks when he fell into deep water and was almost drowned before he was rescued. The hole, which is a large quarry, situated on the Northside of Armadale bowling green and a short distance off South Street forming the boundary of the large accumulation of water in it on which the boys delight to sail on planks. The boy Casey is said to have been on two planks which were not joined together, and they went apart, and he fell into about 8 feet of water. The other boys raised the alarm, and immediately many older people were on the spot from the bowling green and the houses nearby. Mr Robert Cunningham ventured in up to the neck and got hold of the boy on the point of him sinking for the last time and drew him out. It was some considerable time before the doctor had him out of danger but the boy on Monday morning was reported to be doing well