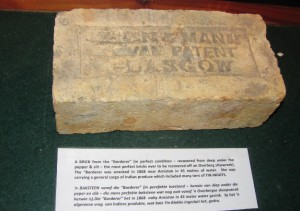 Olivier and Nicolas from Belgium were visiting the “Shipwreck Museum” in Bredasdorp, South Africa when they saw the above-named brick. They remembered hearing the piece on BBC Radio Scotland which covered my brick collecting activities. They kindly took the time to photograph the brick and send me details behind its recovery.

The note typed alongside the brick reads – A brick form the ‘Borderer’ (in perfect condition – recovered from deep under the pepper and silt – the most perfect bricks ever to be recovered off an Overberg shipwreck). The Borderer was wrecked near Arniston in 45 metres of water. She was carrying a general cargo of Indian produce which included many tons of tin ingots.

The Borderer was a British iron ship of 1062 tons, built in 1864 by Lawrie, Glasgow. She was commanded by Captain J. Laback and owned by Messrs J. Willis and Son, of London.

The Borderer left Penang where she had loaded a general cargo of Indian and Straits produce for London. This cargo consisted of rum, tin, rattans, pepper, hides, horns, sugar, tapioca etc., etc.

She struck the middle blinder of the Struis Point reef on the 27th October 1868, during a westerly wind and sank in 45 metres of water. The commander and twelve of his men got into one of the boats and reached the shore, the remainder of the crew (12 in number) jumped into the other boat. Of this second boat, nothing was heard. It was later reported that Captain Harverberg of the steamer Namaqua picked up a capsized boat from the Borderer, about twenty-five miles east of Agulhas.

The Borderer was discovered in 1977 Brian Clarke and Tubby Gericke and part of the tin cargo was salvaged.
During 1990, Aqua Exploration re-located the site and found that there was still a considerable amount of tin left. The depth and poor visibility most of the time made this an extremely difficult and dangerous site to work. However, they managed to excavate and salvage the remaining tin successfully, without any serious diving accidents.

This was the deepest excavation and salvage done in South Africa. 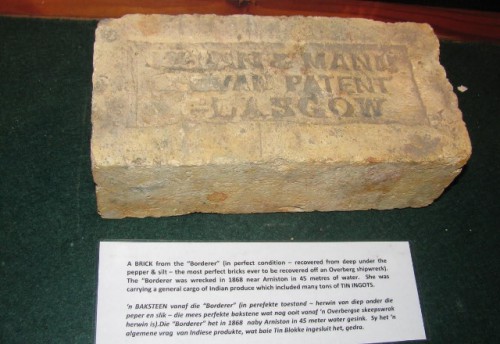