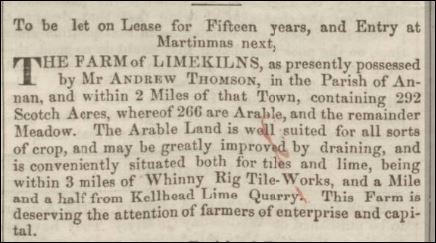 1848 – 1858 – ScotlandsPlaces – A large “Tilework” on the “Whinny rig” farm occupying a considerable number of hands. It is worked by Mr John Thomson and on the property of Mr Halliday – Devonshire.

17/10/1851 – Edinburgh Gazette – Sequestration of William Thomson, some time of Pleasance, now residing at Clerkhill, near Dumfries, tile manufacturer at Whinnyrig, near Annan, and dealer in railway and other shares in Dumfries. John Symons, writer in Dumfries, has been elected trustee on the estate; and John Brand, writer in Annan, Thomas Hairstens McGowan, writer in Dumfries, and Thomas Jackson, clothier in Dumfries, have been elected commissioners. The examination of the bankrupt will take place in the Sheriff-Court-House, Dumfries, on Tuesday the 28th day of October current, at one o’clock afternoon. The creditors will meet in the King’s Arms Inn, Dumfries, on Saturday the 15th day of November next, at 12 o’clock noon. Dumfries, 15/10/1851.

Below – 17/12/1851 – Dumfries and Galloway Standard – Whinnyrigg Tileworks – The Lease of these well-known works current for Five Years from Candlemas 1852, is to be Sold by Tender. The works are situated about a mile south of the Burgh of Annan, in the centre of a district where extensive draining operations are in progress, in consequence of which there is an immediate and increasing demand for the tiles at the Works as made. The implements belonging to the tenant may be had at a valuation. Particulars as to royalty payable to the proprietor, extent of sales, &c., may be learned on application to John Symons, Writer in Dumfries, by whom written offers will be received up to the 15th of January, 1852. Dumfries, 15th Dec 1851. 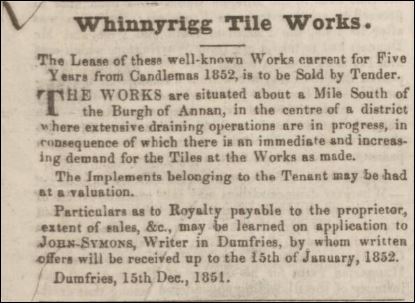 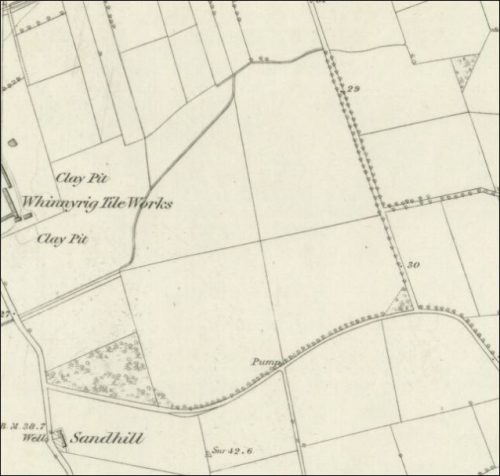 20/04/1861 – Edinburgh Evening Courant – Creditors of William Thomson, some time of Pleasance, thereafter residing Clerkhill, near Dumfries, tile manufacturer at Whinnyrigg, near Annan, and dealer in railway and other shares in Dumfries, will receive a dividend at the office of John Symons, writer. Dumfries, 11th May.

28/08/1863 – Carlisle Journal – The proposed Railway is to commence at the Kirtlebridge Station of the Caledonian Railway … The Whinnyrig Tile and Brick Works which will be connected with the line by a short branch will also yield a considerable amount of traffic. During the past year upwards of 1000 tons of tiles were supplied to 1 farm alone, which would have been transported along the line if it had been in existence.

05/12/1873 – Annandale Observer – Solway Junction Railway V Mr John Jackson, Shawhill, Annan tenant of the brickworks and clayfield at Whinnyrigg near Annan … The pursuers seek to interdict the respondents from assessing or taking any steps towards the assessment under the Lands Clauses Consolidation (Scotland) Act 1845 of the compensation claimed by Mr Jackson from the complainers in respect of clay alleged to be permanently covered by the complainer’s line of railway since its construction and detour for access to clay on the west side of the line … The complainers maintain that Mr Jackson had no right or interest in the land in respect of which he claims and Mr Jackson says that the land taken by the complainers for the formation of their railway is part of the Estate of Whinnyrigg, the clay in which is let to him and that in the year 1864 when the complainers took possession of the land in question, he being in possession and engaged in the working out of the clay therein, under and by virtue of a lease produced, is entitled to have the note of suspension and interdict refused with expenses … His lordship finds it sufficiently instructed the respondent had under his lease, granted to him by the Rev Walter Stevenson Halliday, dated 19/11/1859 and 11/03/1861, an interest in the whole common clay in the lands of Whinnyrigg which belonged to Mr Halliday and that according to the true construction of the lease, having regard to the circumstances in which it was entered into, the lands of Whinnyrigg, therein mentioned, embraced and must be held to embrace the lands through which the suspenders railway passed … He finds in favour of the respondent, Mr Jackson … (and a follow up to the case 13/03/1874 – The Scotsman – No change to the original decision).

29/12/1882 – Annandale Observer – Whinnyrigg Tileworks. These works are at present well stocked with draining pipes of all sizes which can be delivered at any station. Terms on applications at the works.

03/03/1883 – Dumfries and Galloway Standard – Whinnyrigg Tileworks. These works will be carried on as formerly by the trustees of the late John Jackson, under the management of the deceased’s son, Marshall Jackson. The trustees hope, by strict attention to business, to merit a continuance of the favours liberally bestowed upon the late Mr Jackson. Whinnyrigg Tileworks, Annan, February 28, 1883.

16/03/1883 – Annadale Observer – Estimates wanted for stripping and bringing in the clay for the season at Whinnyrigg Tileworks. For further particulars apply to Marshall Jackson, Solwaybank. The lowest or any offer may not be accepted.

20/03/1883 – Annandale Observer – The late Mr John Jackson of Shawhill. On Friday last, about noon, the startling news that Mr Jackson of Shawhill had died, somewhat suddenly, at his residence at Solwaybank, was made known and created a painful sensation as it circulated rapidly among the frequenters of the market. For the last year or so, Mr Jackson had not been enjoying his usual good health, but he continued to go about his business with much of his accustomed energy until Wednesday week, on which day he visited Dumfries. On the Thursday, however, he was prostrated by the rupture of a blood vessel, and on Friday forenoon he suddenly died from a haemorrhage. Mr Jackson came to this district from West Cumberland nearly forty years ago, his business being that of a railway contractor. His first contract was on the Caledonian line near Wamphray and subsequently built several sections of the Glasgow and South-Western line in the neighbourhood of Annan. His next enterprise was the erection of the terrace of dwelling-houses in Church St., which he gave the name of his native county, but he did not give up railway work until after the completion of the Ayr and Dalmellington line, a considerable portion of which he constructed. For a time he was associated with Mr Clennel, Sanquhar, in carrying on the Barjarg Limeworks and several other undertakings. Becoming tenant of the Whinnyrigg Tileworks, he began the manufacture of bricks and tiles, an industry carried on till the time of his death, both at Whinnyrigg and at Broadfield in Cumberland, where he was the proprietor of a small estate. He was one of the seven local promoters of the Solway Junction Railway, who were familiarly known the ‘Seven Wise Men of Annan’, and about the time the line was projected, he purchased from Mr Johnston, the estate of Shawhill, on which he built the residence of Solwaybank. He was also connected with the Annan Mining Company, but his speculative enterprise found a wider field on the directorate, of the Saddleback and Threlkeld Mining Companies, in connection with which he displayed much bold and shrewd management. Mr Jackson was twice married, his second wife being the daughter of Mr George Donald, Warmanbie Distillery, by whom he leaves a large family.

03/04/1885 – Annandale Observer – Draining tiles now on hand. All sizes of above, of this seasons making. Whinnyrigg Tileworks.

11/04/1890 – Annandale Observer – Whinnyrigg Brick and Tile Works. On and after Monday first, the 14th inst, tiles of all sizes will be had of this seasons make. Marshall Jackson.

13/05/1892 – Annadale Observer – Wanted, a good man and a lad to look after horses at Whinnyrigg Tileworks. Apply to M Jackson.

Below – 05/10/1892 – Glasgow Herald – Breach of the Factories Act – In the Dumfries Sheriff Court yesterday, Marshall Jackson, brickmaker, Annan, was fined £1 with 12s 6d expenses for breach of the Factories Act. The offence was only a technical one – a lad of 18 years of age having been kept a short time after two o’clock pm on a Saturday but the Sheriff said the legislation in its wisdom had laid down a hard and fast rule and the penalty must be imposed. (05/10/1892 – Dumfries & Galloway Courier and Herald – More details on the case – William Thomson aged 16 years).

09/12/1892 – Annandale Observer and advertiser. Whinnyrigg Tile and Brick Works – For sale over 100,000 second-hand bricks good for inside building at 20/- per thousand. Also a number of 3/4 bricks suitable for the same purpose at 4/- per cartload. All at works. Marshall Jackson, Annan. 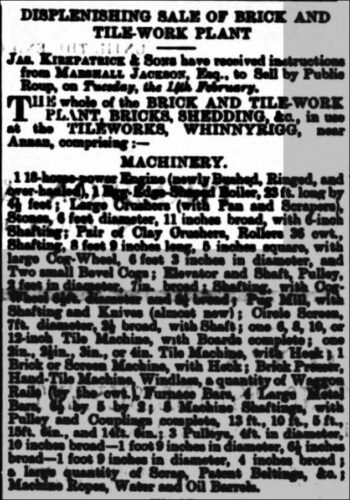 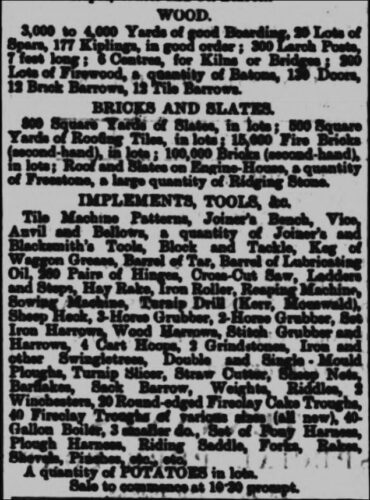 29/12/1893 – Annandale Observer – Whinnyrigg Tileworks, The remaining stock of tiles of about 110,000 consisting of 2, 2½, 3 and 3 inch are now offered for sale. A few light burned 2½ inch will be offered very cheap to clear out. Also, a long-bodied cart (Maybole make) equal to new. For prices apply to Jas Ballantyne, commission agent, Annan.

22/04/1896 – Dumfries & Galloway Courier and Herald – New golf course to be built on land previously worked as the old Whinnyrig Brick and Tile Works.