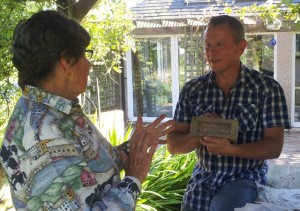 Following several months of swapping emails and planning, I eventually met with Donna and Wally Johnson in Castlegate, Jedburgh, Scotland on 01/07/2014.  It was then back to my house for a BBQ. The weather was sunny which was unusual for a Scottish BBQ, so I ditched the wellies and umbrellas that I had provisionally looked out. My good lady Karen and daughters Katie (Santa’s little helper) and Lucy were also present for the introductions. I lit the charcoal and while we waited 45 minutes or so for the coals to turn white-hot we got down to finding out a little about each other. Donna also took the opportunity to present 3 bricks she had lovingly carried from the States which was a lovely surprise. A BASIC WYOMING, an OXFORD and a MEXICO SALINAS soon became special exhibits in my own collection.  Donna also presented me with 2 small clay memorabilia ‘bricks’ which had been made to commemorate 2 recent brick swaps in the USA – a very nice added bonus for me! I was also presented with my I.B.CA membership card  – Go Go no. 1638! 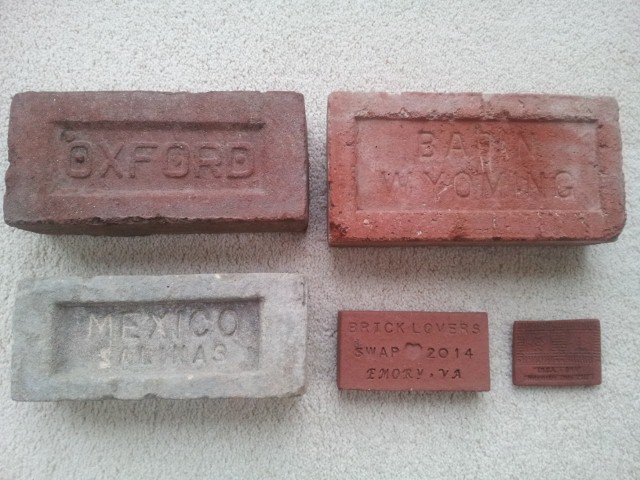 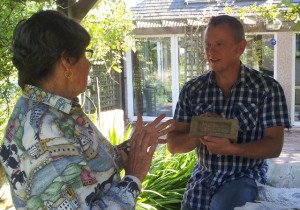 The BBQ seemed to go down well especially the locally caught blue trout which was barbecued in butter, lemon juice and garden-grown herbs. Among the burgers and sausage were some of the local butcher’s special IRN BRU sausages which when seen raw are a rather disturbing orange colour – this being caused by the fact that IRN BRU is a famous  Scottish, orange coloured, fizzy drink (it is made from girders you know  – you may need to google this!). During the BBQ plans were made to head off the following morning to Bo’ness, Firth of Forth, Edinburgh to pick up some Scottish bricks for the return journey to the USA. With tide times and the weather seemingly in our favour we were looking forward to our ‘ratch’ (a friend of mine thus describes a brick hunt) or as Donna put it  – A good days noodling ( I think?) seemed to be on the horizon. I picked Donna and Wally up the following morning around 0900 hrs and I was glad to see the previous night’s BBQ food had not apparently had any adverse effects on them.  The details of the ratch itself are referred to in the following link – Bo’ness ratch The following day we organised to head to 3 of the 4 Scottish Border Abbeys – Jedburgh, Dryburgh and Melrose -(Kelso is the fourth but there was not time on the days itinerary for this one).  First off was Jedburgh.  It was established around 1138 by King David I, as a priory for Augustinian canons. The brethren possibly came here from St Quentin Abbey, near Beauvais, France. The priory was raised to Abbey status around 1154. Jedburgh Abbey. 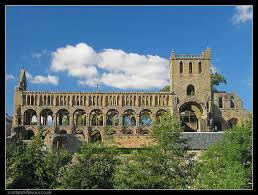 Then it was on to Dryburgh Abbey. The Abbey was established in 1150 by white-clad Premonstratensian canons. They were invited to this idyllic spot from Alnwick Priory, Northumberland, by Hugh de Moreville, The Constable of Scotland and Lord of Lauderdale. Dryburgh became the premier house in Scotland of the Premonstratensian order, which had been established at Prémontré, north-east France, in 1121, by St Norbert of Xanten. This was of particular interest to Wally as he had a personal interest in the ‘White canons’  – a most fortuitous visit as it turned out! 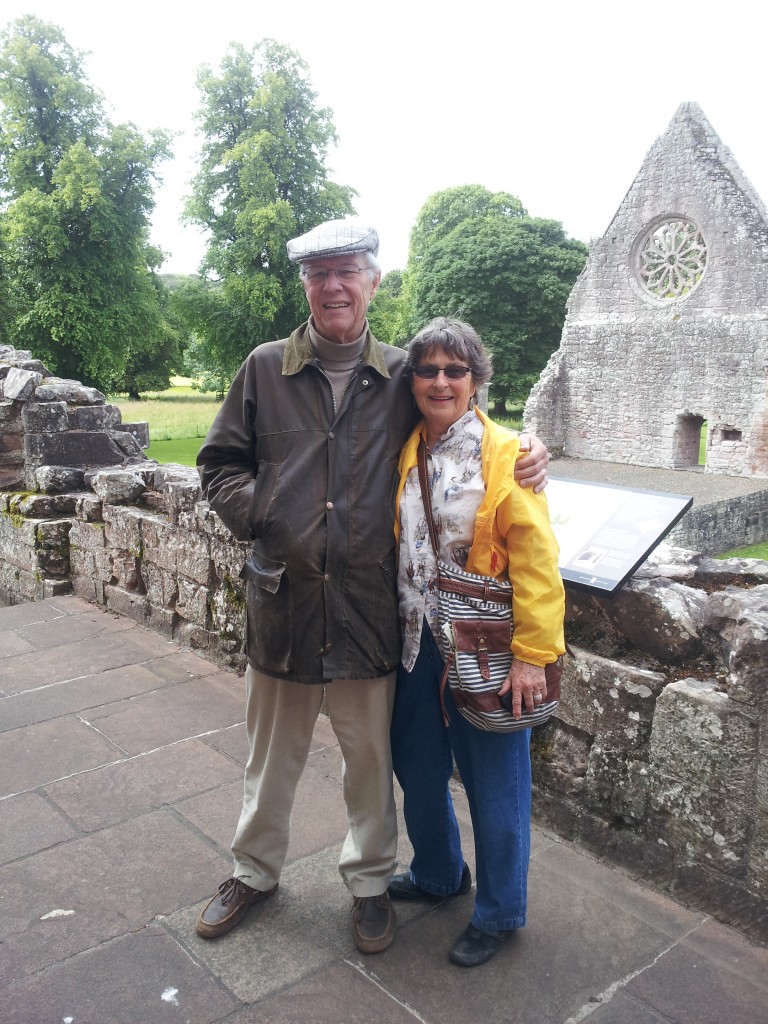 From Dryburgh Abbey, we stopped off to see the giant statue of our national hero, William Wallace.  William Wallace was born in the 1270s in Elderslie in Renfrewshire. Wallace later led a Scottish rebellion against the English King Edward I, who took advantage of a succession crisis in Scotland and imposed himself as a ruler with an English administration. This had not gone down very well with my ancestors! In September 1297, Wallace defeated a much larger English force at the Battle of Stirling Bridge. This and subsequent military successes severely weakened the English hold on Scotland – but Wallace was later betrayed by one of his own and on 3 August 1305 Wallace was captured in Robroyston, north of Glasgow. Wallace was tried in Westminster Hall, London on 23 August 1305. A list of his crimes, including murder and treason, were read out. Wallace denied that he was guilty of treason – he had never sworn allegiance to King Edward. The verdict and the punishment were decided before the trial began. Wallace was to be given a traitor’s death – he was hung, drawn and quartered. 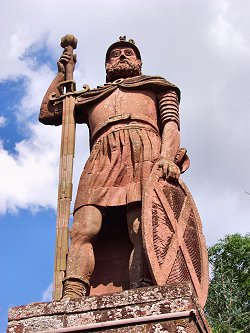 Then at Wally’s request, we were on to Old Melrose for lunch and a wander around an old bookstore. Old Melrose lies on the peninsula formed by a wide eastwards bend of the River Tweed cutting into Bemersyde Hill and is the site of Mailros Abbey and St Cuthbert’s Chapel. Nothing can be seen above ground these days but a large archaeological dig is scheduled for next year.  St Cuthbert (635 – 87) is thought to have been brought up in Lauderdale, and he became a shepherd near to the small community of Oxton. At the age of seventeen, Cuthbert saw one night in a vision a great light in the sky, with a Christian soul being escorted to heaven by angels. He discovered the next day that St Aidan, the founder of the Old Melrose and Lindisfarne communities had died. He resolved at this stage to join the monastery at Old Melrose and then shortly became its third Prior. St Cuthbert was the third Prior of Melrose following St Aidan and St Boisel or Bossil. In reality, the first community was in Old Melrose some two miles downstream from the present Abbey. It was not until 1136 that the Abbey and monastery of Melrose were built by Cistercian Monks from Rievaulx. This takes us nicely on to the visit to Melrose Abbey. Melrose was the first Cistercian abbey in Scotland, founded in 1136 by King David I. The Melrose monks, being Cistercians or white monks, were one of the new wave of reformed monastic orders, and were founded in 1098 AD at Cîteaux, near Dijon in Burgundy, by a group of Benedictine monks. They were observers of St Benedict’s Rule and believed that it was being followed in too lax a manner. The Cistercians, who took their name from the Latin for Cîteaux – ‘Cistercium’ – opted to follow St Benedict’s rule strictly, refusing feudal revenues and reintroducing manual labour for their monks. Due to its proximity to the border, Melrose (indeed all the Border Abbeys) frequently suffered at the hands of invading English armies. In 1322 Edward II desecrated and burnt the abbey. It was rebuilt and endowed by King Robert the Bruce in 1326 only to be destroyed again in 1385 when Richard II of England once more set the Abbey ablaze. On Robert the Bruce’s death, his heart was sent on a crusade to the Holyland, accompanied by ‘Good Sir James Douglas’. Sir James, confronted by a huge army of Moors whilst travelling through Spain with his crusaders, gallantly charged into battle, throwing Bruce’s heart before him and shouting: ‘Lead on brave heart, I’ll follow thee.’ The heart was discovered the next day amongst the slain bodies by another Scottish Knight, who brought it back to Abbey Melrose, where it was buried Melrose Abbey and the resting place of the heart of King Robert the Bruce of Scotland 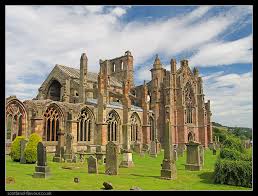 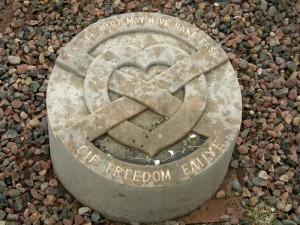 Following our tour of the Border Abbey’s, it was back home to come up with the final final final decision on which bricks would accompany Donna and Wally back to the USA. There was much discussion on this subject but eventually (and just before the landlady at their B & B reported them missing) the chosen ones were selected.  As the weight of clothes and bricks was very close to the maximum allowance I had visions of Donna and Wally boarding the aeroplane wearing 4 sets of clothing each, all in a bid to keep their luggage weight down. I do hope they managed to get through check-in and customs safely and are not languishing somewhere in a Glasgow jail! This was a most enjoyable few days and we all thoroughly enjoyed the company of Donna and Wally and we do hope that we will meet again someday. (PS.. by the way Donna – I said I would use my membership number ie 1638 and various permutations of it to complete a national lottery ticket – well I have to say those numbers failed miserably!)