16/02/1847 – Banffshire Journal and General Advertiser – Turriff Brick and Tile Work – All articles in the line are now manufactured at this Work, among which may be enumerated, bricks, pantiles, drain tiles of all sizes; pipes, for conveying water, made to order, any size and rough or closed jointed; chimney cans and garden pots. Any other article in the line will be made on receiving a description of its size and shape. All orders are punctually supplied early in the summer. Applications to be addressed to the manager at Turriff. 15/02/1847.

08/08/1850 – Stirling Observer – Highland and Agricultural Society’s Grand Show in Glasgow – For the best apparatus or machine for cutting the ends of drain pipes so as to form a continuous and permanent connection without the use of collars, 3 sovs, to James Wallace, Manager, Turiff Tileworks, Turiff.

26/11/1850 – Banffshire Journal and General Advertiser – Turriff Tilework – Drain tiles and pipes of the best quality and of all sizes usually made, may be supplied from this tile work during the present season. House tiles if not on hand, will be made to order. For information as to prices etc, an application may be made to James Wallace at the Works. Turriff 12/08/1850.

1865 – 1871 – ScotlandsPlaces – Turiff Brick and Tile Works. The kiln of this work is almost in ruins, but it is still in use, there are six men regularly employed in it, the clay used is said to be very good, it is brought from the clay pit. Situated near to the Market Ground, they are about forty chains apart. Mr Wallace, tenant.

07/02/1865 – Banffshire Journal and General Advertiser – Trade in Turriff … A few new arts and trades have also been introduced, such as photography, house painting and paper hanging, coach painting and the manufacture of brick and tiles but these, with the exception of the last, add but little to the aggregate trade of Turriff. The brick and tile work was called into existence to supply the demand for drain tiles, consequent on the disbursement of large Government grants for agricultural improvement: but although these are now mostly expended in the locality, yet, under the able management of Mr Wallace, it is likely to remain a permanent institution.

1868 – 1871 – Brick and Tile Works Turriff – Mr Wallace, tenant. George Robertson, Turriff. James Scott, Turriff. The kiln of this work is almost in ruins, but it is still in use, there are six men regularly employed in it, the clay used is said to be very good, it is brought from the claypit. Situated near to the market ground, they are about forty chains apart. 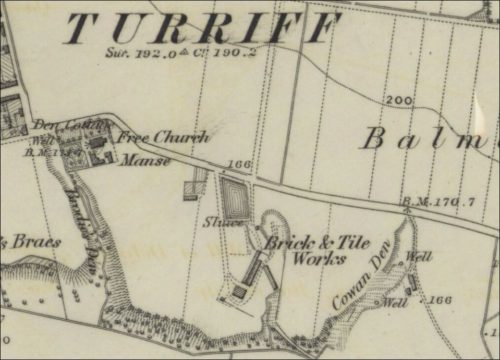 15/10/1878 – Banffshire Journal – Turriff Tilework Company. Notice is hereby given that James Wallace, residing in Turriff, sometime manager of this company, is the sole partner thereof and that the business is carried on by him solely and individually under the style of the Turriff Tilework Company. All parties having claims against the company up to this date are requested to immediately render the same to Messrs Allan and Soutar, solicitors, Banff. 30/09/1878.

09/12/1884 – Banffshire Journal -King Edward. New industry. The Seatown (Seaton)Brick Company, Limited, Aberdeen, who have for some time past been initiating inquiries as to clay deposits in this and other districts, have now decided to lay down branch works on the farm of Mr Duncan, Plaidy. The ground to be occupied is on the Craigston estate and will be about three acres and half extent, including sites for sheds, engine-room, stores, and probably dwelling-houses, when the amount of business has been ascertained. As the works will be within a mile of Plaidy Station, it is also in contemplation to connect them with the Macduff and Turriff Extension Railway. Since the closing of the Turriff Brickwork, no industry of the kind has been in operation to supply the district, and its absence has been greatly felt. Mr Duncan, architect, Turriff, will act for the Company in laying out the ground and planning the works.