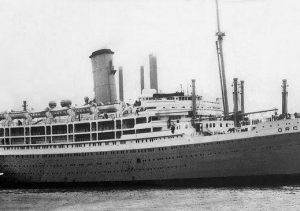 Many thanks to Bob Frost, Tasmania for directing me towards the following information.

RMS Orcades was a British passenger ship that Vickers-Armstrongs Ltd of Barrow-in-Furness built as an ocean liner in 1937. Her owner was Orient Line, which operated her between Britain and Australia 1937–39, and also as a cruise ship. The Admiralty then requisitioned her and had her converted into a troopship.

In 1942 the German submarine U-172 attacked her off South Africa. Orcades‘ crew and gunners fought to fend off the submarine and save their ship, and it took U-172 two and a half hours and seven torpedoes to sink her. Orcades‘ Master, Charles Fox, was decorated by the Crown and Lloyd’s of London for his bravery and leadership. WIKI

Deep Ocean Search located the wreck of SS Orcades off Cape Town, South Africa and took photos of the sunken remains including this one of a pile of Thistle bricks some 4800 metres down. The bricks were, most likely part of her general cargo or they may have been spare fire bricks for her boiler fireboxes or other associated stoves etc however more generally fire bricks for boilers etc would be shaped in some way. 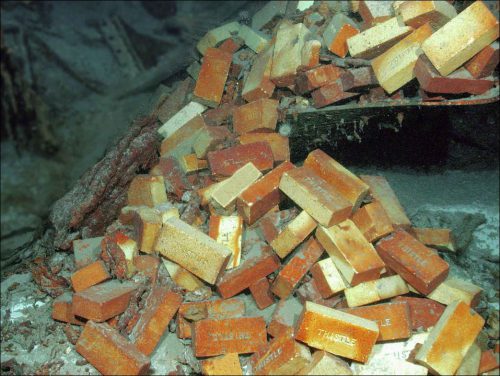