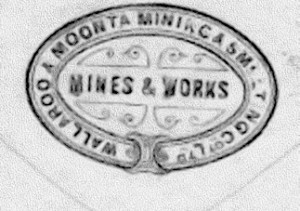 This is a fascinating report on the history of The Wallaroo Smelters site.

The Wallaroo Smelters operated between 1861 and 1926 on a site on the foreshore at Port Wallaroo on Spencer Gulf. Their principal business was smelting the copper ores from the mines at Moonta and Kadina nearby, one of Australia’s foremost nineteenth-century copper mining districts, but there were also episodes of treating silver-lead and gold ores. After the smelters closed, the major structures were demolished, and the site sat abandoned and derelict for over eighty years. A superphosphate factory which had opened in 1900 continued to manufacture fertiliser on part of the site until the 1990s.

The Wallaroo smelters site is littered with scraps of building materials: stone, slag, concrete and thousands of bricks, mostly broken. The brand names reveal a museum of bricks from around the world. Many of them are refractories or firebricks used in furnaces and flues: Cowen was the brand of Joseph Cowen & Coy of Blaydon-on-Tyne near Newcastle in the north of England (1823-1903). Atlas, Dougall and Gartcraig firebricks were all imported from Scotland, made respectively by the Atlas Fire Brickworks of Bathgate, West Lothian (1882-1973), James Dougall & Sons Ltd of Bonnybridge (c.1874- 1962) and the Gartcraig Coal and Fireclay Coy Ltd of Gartcraig near Glasgow (1872-1927). Bricks marked Obsidianite may also be from Glasgow. Some of the firebricks on the site are of Australian origin: Watts firebricks were made by J.S. Watts & Sons at Nairne in the Adelaide Hills (1863-1984), and Darley firebricks came from the Darley Fire Brick Company which began manufacturing refractories at Bacchus Marsh in Victoria in 1893 and still operates today as Darley Refractories Australia Pty Ltd. There are also large numbers of unidentified firebricks marked simply with numerals and letters, e.g.: 39 77 C1 B. Then there are common red house bricks, most of them unmarked. Some marked Bakewell were made by Bakewell Brothers of Erskineville, NSW (1884-1955). Others marked Federal are from the Federal Steam Brickworks at Waratah near Newcastle. (1901-1914). These almost certainly arrived at Wallaroo with cargoes of coke. (Gemmell 1986, Gurcke 1987, Moore 1981, Sanderson 1990, Watts 1985). Throughout the life of the smelters, there was a brickworks making bricks locally, and by 1902 they were said to be producing 70,000 high-quality firebricks each year. (Bannear 1985, p. 85) These must have been unmarked, as no Wallaroo brick brand has been identified on the site. 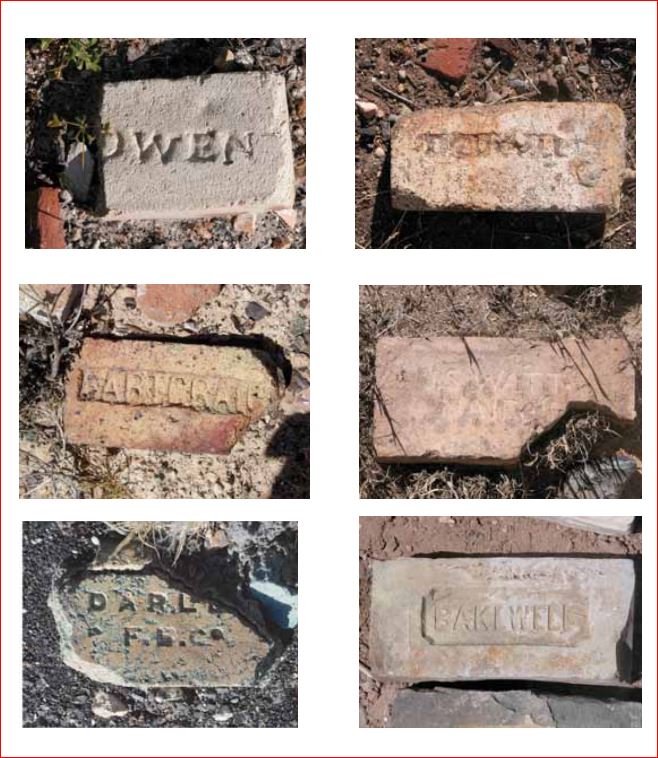 Similarily this report on the Evolution of Early Copper Smelting Technology in Australia describes some changes in the technology employed to smelt copper in Australia from the industry’s origins in the mid-nineteenth century until the First World War. As case studies, it examines seven smelters built between 1847 and 1909 and looks at the physical evidence found on these and other Australian copper smelter sites today.

… The cost of refractory bricks was a serious impost on any smelting operation, as good quality ones were generally imported from the British Isles. Bricks with brand names such as Clackmannan, Cowen, Dougall, Gartcraig and Glenboig are found on mine sites all over Australia. Even as late as the turn of the twentieth century imported firebricks cost £11 per thousand at the wharf and Australian made ones £5 or more per thousand.

But in earlier times and more remote locations, the added cost of transport could raise the price tenfold; in 1865 the Thomson River company paid 2/6d each, or £125 per thousand, for firebricks at its Gippsland smelter.  To illustrate the scale of the expense involved in importing firebricks, a large smelter such as Wallaroo could require as many as 10,000 refractories a month for repairs and rebuilding. The few copper mines such as Burra which had good quality fireclay in their local district were very fortunate …
Tagged with: Atlas, Australia, Clackmannan, Gartcraig, James Dougall, Scottish bricks overseas