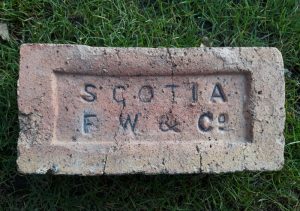 The stamp looks like ‘SG’ but it is definitely ‘SC’ – the tail on the ‘C’ is a fault in the brick.

The name is Scottish in appearance but its origins are in doubt.

Although the Scotia trademark is unidentified as yet with regards a manufacturer, I am hoping the FW & Co addition to this stamp may provide an answer as to the maker. (FW & Co could well be the manufacturer but equally, it may be the customer)

Yet again Scotia marked bricks, as per this one, were found alongside another mystery brick marked ‘MAC Brand‘ 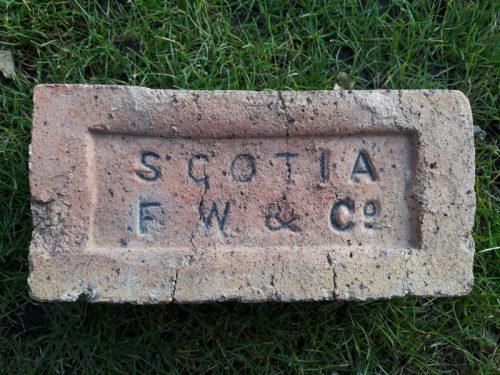 Possibility – There is a Scotia & Sneyd Green Brick & Marl Co Ltd, Scotia Bank, Tunstall, close to the site of the old Scotia Colliery. This company is listed in the 1907 trade directory.

Link to Tarboats photo of a Scotia & Sneyd Green Brick.