Home / Brick and Tile Works / Roman Bricks – Made in Scotland 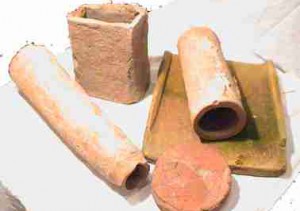 The Romans further distinguished those which had been dried by the sun and air and those bricks which were burnt in a kiln. Preferring to make their bricks in the spring, the Romans held on to their bricks for 2 years before they were used or sold. They only used clay which was whitish or red for their bricks.
Using mobile kilns, the Romans were successful in introducing kiln-fired bricks to the whole of the Roman Empire. The bricks were then stamped with the mark of the legion who supervised the brick production. These bricks differed from other ancient bricks in size and shape. Roman bricks were more commonly round, square, oblong, triangular or rectangular. The kiln-fired bricks were generally 1 or 2 Roman foot by 1 Roman foot, but with some larger bricks at up to 3 Roman feet. The Romans preferred this type of brick making during the first century of their civilisation and used the bricks for public and private buildings all over the empire. Source

The Romans made large bricks which measured about 18 inches square and about 1½ inches thick. So, from 43AD until 412AD, the Romans introduced the use of brick in England, Scotland and Wales. However, after they departed, bricks were no longer manufactured here. Bricks were still used, but only those taken from buildings built by the Romans. You can see even today many examples of Roman bricks in our churches (St Albans Abbey/Cathedral). Source

Mumrills, Falkirk – A Roman kiln for making tiles or bricks was discovered in 1913 (G Macdonald and A O Curle 1929) about 100 yds NW of the enclosure, immediately behind the wall.

Established: During the period of the Roman Occupation

Company history: – The Roman Kiln at Mumrills is the first indication of the production of bricks in the Falkirk area. The kiln appears to have been built almost entirely of stone, and the remains show traces of having been exposed to intense heat. The presence of a considerable quantity of bricks and tiles at the site indicates that the kiln was probably used for firing these articles, although it may have also fired pottery.

Site description: – The kiln is situated to the south west of Beancross and to the east of the Roman fort. The articles to be fired would have been piled in a bee-hive shape on perforated clay floor tiles which were supported, in part, by projections from the wall extending across the combustion chamber below the kiln proper. Several layers of clay and straw would have been placed over the bee-hive pile, and openings at the top would have permitted the escape of hot gasses.

Raw materials: – The clay was probably dug locally. The kiln would have been fuelled by wood and charcoal, although coal may also have been used on occasions. The latter would have been easily obtainable, as a coal seam outcropped on the banks of the Westquarter Burn, half a mile to the south-west of the fort.

Processes: – The fire would have been built in a tunnel leading to the combustion chamber below the actual kiln. The heat would have been drawn through the firing chamber and out through the holes at the top. Once the fire had been lit it was allowed to burn itself out. The wares, which probably included tiles and pottery as well as bricks, were then allowed to cool and were removed from the kiln. 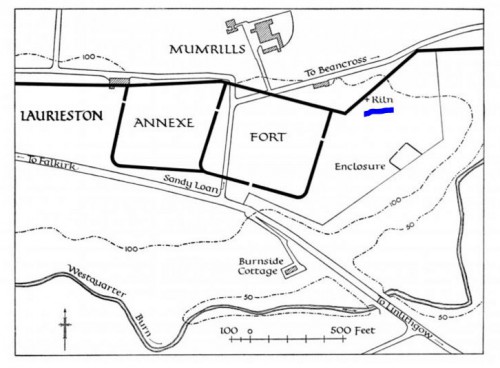 The most remarkable find in this category was, however, the collection of twenty-five brick-fragments which were discovered in the fill of a disused post-hole belonging to a first-period building on the north-west side of the Via Principalis; four of these bore imprints of an animal’s paw; (PL. VII).

Dr A. S. Clarke of the Royal Scottish Museum, Edinburgh, has kindly examined these pieces and identified the animal as a cat, probably Felis domesticus. The width of the prints varies from 25 to 35 mm, considerably smaller than that of the pad-impressions from the Roman fort at Mumrills (Proc. Soc. Ant. Scot. lxiii (1928-29), 57I f.), which were identified as Felis sylvestris. [JAC: note that the name of the housecat, once Felis domesticus, is now Felis catus or, sometimes, Felis silvestris catus, the latter designating the housecat as a subspecies of the wildcat Felis silvestris. And a subspecies of F. silvestris, Felis silvestris lybica, the African wildcat, was probably the wild ancestor of all housecats.]

The fact that the impressions of the claws can also be seen in three of the Bothwellhaugh ex-amples, although more faintly than in the Mumrills fragment, would suggest that the animal was not allowed to maintain a regular pace in its progress across the drying bricks.

It is accepted that Roman bricks and tiles were made using removable mouldboards and allowed to dry in a roofed area which was open at the sides. After drying to ‘leather-hardness’, they were then fired; this made permanent any marks which the brick had acquired in its earlier and softer state (Brodribb 1987, 125). Various animals left their marks on the clay of the ‘green’ bricks and tiles at Newstead. Obviously the softer the clay and the heavier the animal, the deeper the imprint. All finds recorded below have been recovered by a systematic pattern of field-walking.