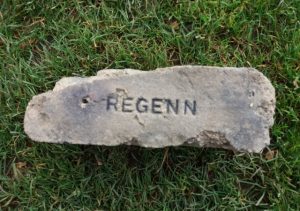 Unidentified brick, however, the find location suggests Scottish origins but …

The brickmarks is on the side of the brick.

Now although this is unidentified, I have 2 makers in mind.

1. In the Garnkirk Fire & Clay booklet by Quail he states… In the 1894 products catalogue, Garnkirk were making ” special bricks for Siemens Patent Regenerative Gas Furnace….Garnkirk clay was said to be ‘preferably specified by Mr Siemens’ “…. does this Regenn brickmark signify it was a special made for Siemens?

2. Glenboig  – as per the advert below who were making bricks for ‘Siemens Regenerators” – Furnaces. 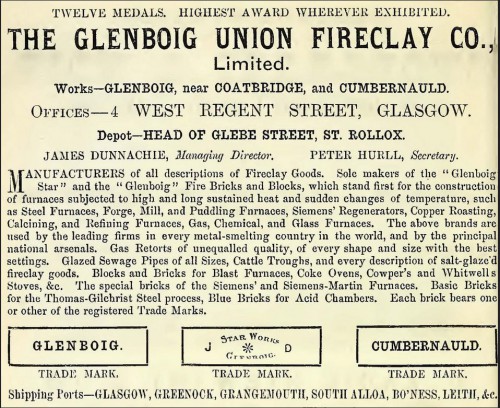 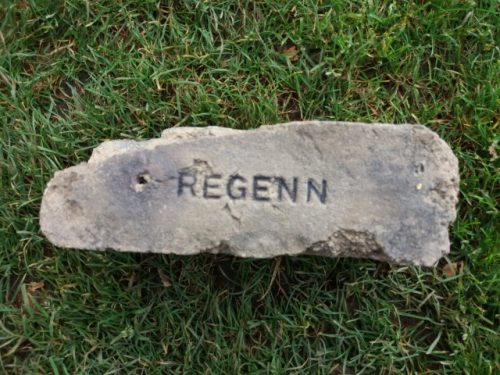 By 1860, 40 iron works round the world were using the Bessemer process. But during the 1850s Sir Carl Wilhelm Siemens had developed the Siemens regenerative furnace. It was then only a small step to building the first 2-ton hearth furnace combined with Siemens air regenerators which were made in France. By 1857 this was claimed to be recovering enough heat to save 70–80% of fuel. This furnace operates at a high temperature by using regenerative preheating of fuel and air for combustion.

In regenerative preheating, the exhaust gases from the furnace are pumped into a chamber containing bricks, where heat is transferred from the gases to the bricks. The flow of the furnace is then reversed so that fuel and air pass through the chamber and are heated by the bricks. Through this method, an open-hearth furnace can reach temperatures high enough to melt steel.  Then in 1865 along came the French engineer Pierre-Émile Martin who took out a license from Siemens and first applied his regenerative furnace for making steel. The most appealing characteristic of the Siemens regenerative furnace is the rapid production of large quantities of basic steel, used, for example, to construct high-rise buildings. The usual size of furnaces is 50 to 100 tons, but for some special processes, they may have a capacity of 250 or even 500 tons.

Thus the Siemens-Martin process, also known as the ‘Open Hearth’ process, Sieenscomplemented rather than replaced the Bessemer process. It is slower and thus easier to control. It also permits the melting and refining of large amounts of scrap steel, further lowering steel production costs and recycling an otherwise troublesome waste material. Its worst drawback is the fact that melting and refining a charge takes several hours. This was an advantage in the early 20th century, as it gave plant chemists time to analyse the steel and decide how much longer to refine it.