18/07/1814 – Caledonian Mercury – Omoa Ironworks for sale – The lease of the mines and minerals is current for 40 years from 15/02/1789 and the lands thereby let contain inexhaustible fields of coal, level free with extensive beds of ironstone and plenty of fire clay of the best quality all within a very short distance of the works and to which they are conveyed by railroads …

11/04/1822 – Caledonian Mercury – Omoa Ironworks for sale, the property of William Young, Coalmaster, Glasgow … And includes inexhaustible fields of coal … And plenty of fire clay of the best quality and within a very short distance of the works and to which they are conveyed by railroads …

29/09/1825 – Caledonian Mercury – An early reference to the Estate of Clelland and the neighbouring Omoa Ironworks … There is likewise abundance of fire clay which can be wrought with the coal and as common clay is plenty on the estate, the situation is so well adapted for manufacturing earthenware as to have attracted, a few years ago, the attention of an English company with that view. Tiles and bricks could be made to a great extent. Some of the coals and ironstone have been wrought extensively for supplying the neighbouring blast furnaces of Omoa where they were considered excellent …

Below – 1864 – Omoa Iron Works Cleland and a potential site of the Omoa Fire Clay Co. 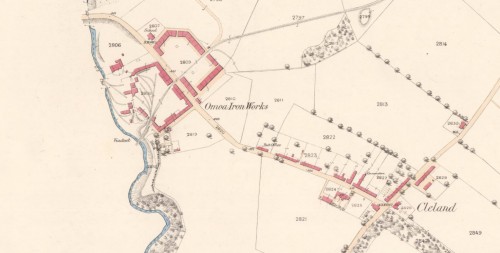 Below –  10/07/1867 – Glasgow Herald – Omoa Ironworks to be sold or let. Refers to selling clay mills and mineral fields containing fireclay.

1870s -The 1985 publication ‘A survey of Scottish brickmarks’ suggests that John Kennedy operated the works around this time.

15/05/1871 – Glasgow Herald – To be let – The remaining coal and rough band ironstone and fire clay at Cleland near Motherwell, recently held in a lease by the late Robert Stewart of Omoa Iron Works.  Also a field of oil shale and the clay and shale on the ironstone heaps for brickmaking. The mineral field is connected with Edinburgh and Glasgow by the Caledonian Railway system and there are houses in readiness for workmen …

03/08/1874 – The Scotsman – Omoa and Cleland Iron and Coal Company Limited – Director’s report on the 2nd years operations of the company … after considerable trouble with contractors and other tradesmen, the erection of first-class fire clay works have been completed and your directors have every expectation that these works will hereafter provide a source of considerable additional revenue for the company …

28/08/1875 – Glasgow Herald – Omoa and Cleland Iron and Coal Company Limited  4th  ordinary meeting … Our brickwork as formerly indicated to you is an excellent one and has now been for some months in operation. This work has been erected at a considerable cost although as yet it has yielded little return owing to the want of demand and adequate prices. Our composition bricks are of the very best quality. Our fire bricks manufactured from the clay raised out of the company’s own pits are also of superior quality and according to Dr Wallace’s analysis, fit to be used in blast and other furnaces, but these are also selling at prices not so remunerative as your directors would desire … As to the other department, bricks, they had had some trouble in opening up a business connection and last years profit from this source was small but a considerable portion of the year was occupied in completing the works for the manufacture of bricks and other goods. They were at present busy setting up extra machinery for making sewage pipes which seemed to be in great demand throughout the country and the directors hoped to have a considerable return from the sale of these materials.

31/08/1877 – Glasgow Herald – Omoa and Cleland Iron and Coal Company Limited  7th  ordinary meeting … The directors are glad to report some improvement in the business of the brickwork over the last year, although they have had to contend with considerable competition and low range of prices ruling for all kinds of fire clay goods. They fully expect a growing increase in this department of the company’s business, which requires time for development, and as all the plant and buildings have been greatly improved and are in better condition than they have ever been, the company are now in a position to meet any increased demand which may set in for their manufacture. To meet the demand for workmen’s houses in Omoa, the directors have built from old bricks in stock, tenements containing 16 houses in all from which they expect a good return on the outlay.

28/08/1880 – Glasgow Herald – Omoa and Cleland Iron and Coal Company Limited  9th  ordinary meeting … during the year the pits were closed for a few months and that necessitated the closing of the brickwork and, as they knew, current expenses running on and nothing going out the profit certainly went on working expenses. He was glad to say that so far as this year had gone they were doing tolerably well. They were never able to tell from the state of the mining world what was to turn up but if they only got the present prices of coal and a fair demand for their brick and fire clay material, he did not feel at all doubtful but that they would have better results during the current year than they had in the past …

01/09/1882 – Glasgow Herald – Omoa and Cleland Iron and Coal Company Limited  11th  ordinary meeting … during the year, partly owing to dull sales the output at the pits was much restricted and the brickwork from the same cause was practically idle … this current year the sales were much better and the output largely increased. At present, there were no coals lying in the pits and the brickwork was in full operation …

19/04/1886 – Glasgow Herald – Brickwork to sell or let on lease, situated at Omoa, near Holytown and communicating with the Caledonian Railway by a private siding. The stock and plant can be held at valuation …

Below – 01/05/1889 – Glasgow Herald – Ravenshall Coal Company are the new tenants of the Omoa Fire Clay Works having acquired same from the liquidators.

10/05/1892 – The Glasgow Herald  – As everybody knows, bricks are largely used in most buildings, but in Scotland only in partitioning and dividing apartments. Up to a recent period few people in Scotland would have thought of using brick instead of stone in facing their houses: and in such a city as Glasgow, it would have been thought incongruous to erect a brick building of any value or pretension to taste. This was due in great measure to the excellent white freestone we have had in Scotland and to the fact that our clay was not equal to produce such bricks as were manufactured in England. A gradual change is taking place in this respect. White freestone has become nearly exhausted and the red freestone is rapidly taking its place and terracotta is competing with both. A splendid block of buildings was recently erected by the Prudential Insurance Company in Renfield Street of this city, faced with the finest English brick from Ruabon in Wales. In the country, there are springing up a few fine palatial residences, brilliant with the red terracotta brick. And the Fine Art Galleries and the New Conservative Club, both about to be erected in Glasgow are to be built from this terracotta brick. Under these circumstances, it may seem singular that this clay which has been so often sought for and long wanted, has been found and that this terracotta manufacture, which has hitherto been confined to England and Wales, will now be carried on at Braidwood on the Estate of Simon MacDonald Lockhart, Baronet of Lee and the material, it is said, can be produced at a price which will stimulate and encourage the erection of terracotta buildings throughout Scotland. The Omoa Fireclay Company are busy erecting works on the Caledonian Railway near Braidwood, with all the latest machinery improvements and these works will shortly be in operation.

Below – 15/05/1894 – Edinburgh Gazette  – Omoa Fire Clay Company dissolved on 30/06/1893 by the retiral therefrom of the subscriber John Tennant Barrie. The other subscribers will continue the business under the same name – John Ferguson and John Agnew. 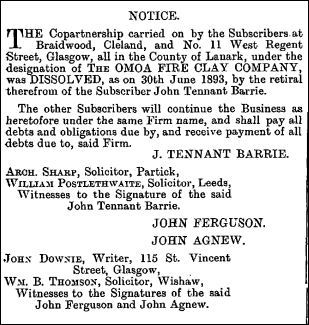 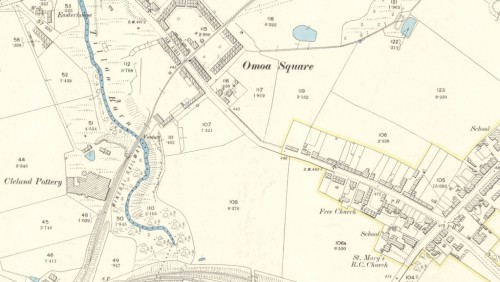 1897 – 1911 – The 1985 publication ‘A survey of Scottish brickmarks’ suggests that the Greenhill Colliery Company operated the works during this time. 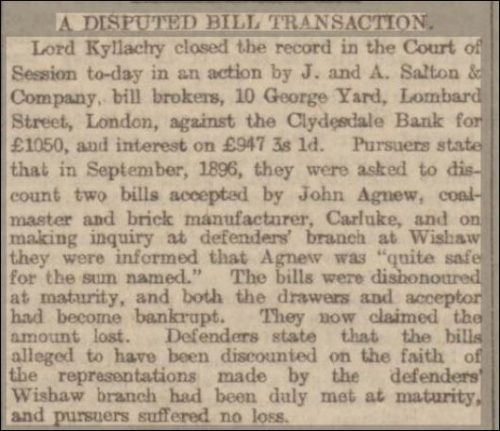 The Lee Terracotta Works, Carluke were erected by John Ferguson and John Agnew who also operated the Omoa Fireclay Co.

Omoa derives its name from Omoa in Honduras, where Colonel Dalrymple distinguished himself in battle before returning to set up the Omoa Ironworks, Cleland.

The pottery works site amounted to over 4 acres and was located on the west side of the Tillan Burn, south-west of Omoa Square. Large deposits of fireclay were nearby. Many of the factory employees were housed in a 2 storey building known as the Pottery Building (possibly part of the small settlement to the south called Easterhouse). Other factory workers were known to live in Omoa Square.

The Cleland Pottery was formed from and by the existing Omoa Fireclay Company, however, things did not go well, and Cleland Pottery ended in voluntary liquidation in January 1899.

In 1900 John Barbour Kennedy acquired the Cleland Pottery Company from the liquidation for £1000, and with John Agnew (Brickmaker, Fireclay Manufacturer, Coal Owner and entrepreneur), proceeded to revitalise production. When John Agnew [1862-1914] stayed in Omoa Cottage in 1891, he was a managing brickwork partner of the Omoa Fireclay Company.