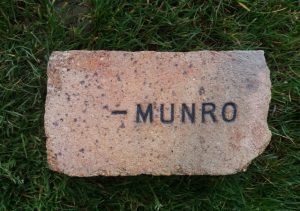 Found at Bo’ness, Firth of Forth.

This was found on a section of the shore directly alongside a brick stamped ‘Philadelphia No 1 R Firebrick’.

This is likely an American import. See below for a very similar brick found in Pennsylvania, USA

Below – The ‘Munro’ brick found at Bo’ness. 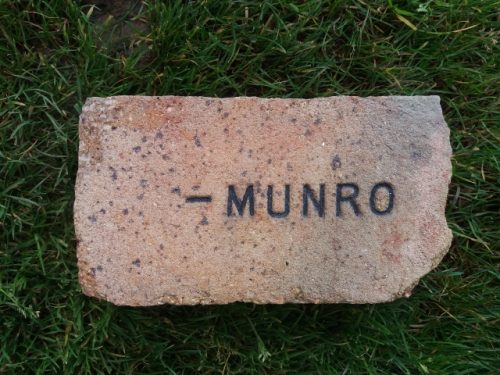 Below – A ‘Munro’ stamped brick found in Bridgeport, Montgomery County, Pennsylvania, USA by Rev. Daniel Paul Morrison. Note this brick has the same hyphen preceding the name stamp. It was likely manufactured by Harbison-Walker at one of their Pennsylvania Brickworks. 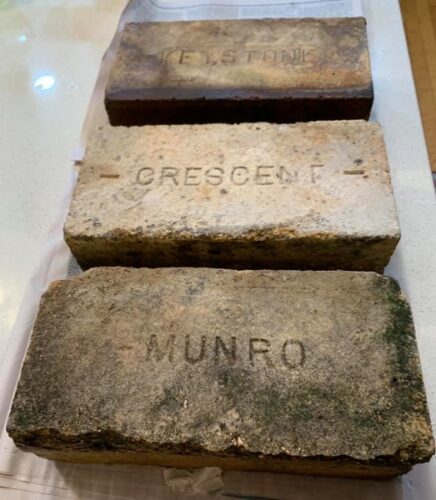 (Note – SBH – I still think this entry below is also a possibility, particularly considering the above Pennsylvania connection – It would be fantastic to find a brick here that was manufactured in the USA by an emigrated Scotsman!).

History of the Farrandsville Iron Furnace – Financed by a group of Boston Capitalists, construction of the historic Farrandsville Iron Furnace was begun in the winter of 1836 under the supervision of its designer, Edward Thomas of Wales. Utilizing stone mined at the quarry located on the mountain directly behind the site, the master mason, John P. Salmon of England, and his crew of skilled stone cutters completed the 54 foot high (including the chimney stack) blast furnace by early 1837. The usual blast equipment, a large bellows operated by a water wheel, was on place. However in 1828 in Scotland, James B. Neilson had become the first to use hot blast in a furnace, an innovation which would work such a revolution in the iron trade, and another Scot, James Ralston, had put it into practical operation at the Clyde Iron Company in Dunlap, Scotland. An agent of the Farrandsville Iron Company visited Mr Ralston in 1836 and enticed him to come to America. Taking passage on the South Carolina Ship “ Leonore” with the hot blast pipes manufactured in Glasgow, Mr Ralston arrived in New York City in February of 1837 and at Farrandsville, via the West Branch Canal, by that Spring. Here, at the recently completed furnace, he superintended the erection of machinery and started the first successful hot blast, not only in America but in the continent. After the furnace had been in blast a time, the “pig” iron produced was of superior quality as foundry iron, the yield being about 50 tons per week. The blast was propelled by 170 horsepower which was generated by a steam engine having 10 boilers. A higher-quality iron ore was transported from Montour Ridge in Columbia County while the limestone came from Nittany Valley. The fuel was coke and was made from the bituminous coal mined at Minersville, atop the mountain adjacent to the furnace, from whence also came the fire – brick which would line the interior stack in future years. The furnace is one of the largest early furnaces still in existence in America and, since mortar was not used, is an outstanding example of dry masonry. The furnace was deeded to the Clinton County Historical Society on September 28, 1951, by the Harbison – Walker Refractories Company.
The village of Farrandsville was founded in early 1832 and owes its beginning to William P. Farrand, an enterprising man of scientific achievements who was a representative of the Lycoming Coal Company which was financed by a group of Boston Capitalists. For about 2 decades, Farrandsville was the industrial giant of what is now Clinton County. In 1839 Alexander Munro, a Scotsman, at the aforementioned Minersville, built the first plant in Pennsylvania specifically designed to manufacture fire – brick. About a mile west of Farrandsville, a very large and elaborately furnished mansion was built for Queen Maria Christina of Spain by John & Christopher Fallon, her agents in America, using a portion of the money attained by Spain for the sale of Florida to the United States.

Jean Bear adds – In looking at Jim Grave’s listing of events at Farrandsville, I see that he has found documentation for the existence of Fredericks – Munro Co. from 1862 to 1903. (perhaps at some point, Alexander Munro took a partner?) In 1903, Harbison-Walker bought that brickyard. In USA, as larger companies bought out the smaller ones, they often used the same moulds and name brands. I would also speculate that the brick shown in Daniel Paul Morrison’s photo was made later than 1903 since it has a more modern look to it, but I’d say it was definitely related to Alexander Munro. According to 1922 and 1927 records that I have, H-W was making both MUNRO and -MUNRO bricks at Mill Hall, PA. After 1942, those brands were also used in other H-W plants. (By the way, I was interested to see the name “Ralston” as there is a town in Pennsylvania by that name, and the Ralston Brickworks operated there from 1903 until 1913. They produced bricks for building, with the name in a frog; I have an example.)

Below – 1909 – And further evidence with regards to the Harbison Walker connection. 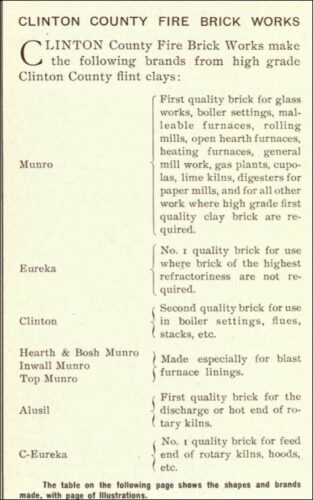 Below – On finding this brick I was uncertain as to its origins and I noted several possibilities. I have left them detailed below just in case the American origins turn out to be a false dawn!

Possibly manufactured by the following although this is a fire brick and it does not look as old as 1810 – 1837 etc.

03/06/1822 – Glasgow Herald – John Monro, brickmaker in Glasgow. Creditors to meet in the Lyceum Rooms, 17th June at two, to instruct the trustee.

I believe this is the same brickmaker as 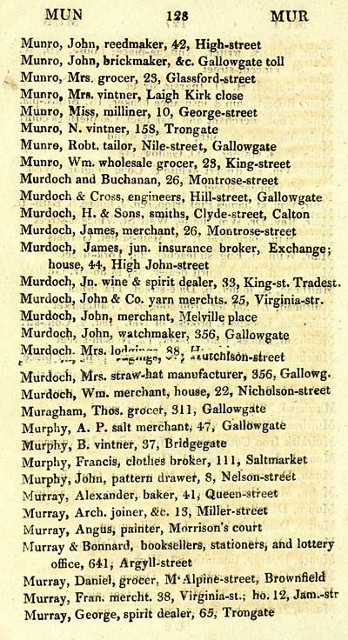